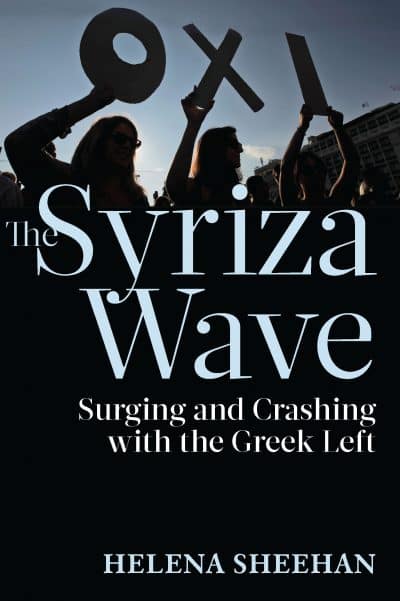 During 2014 and much of 2015, the Greek party SYRIZA convulsed progressive opinion around the world. In Ireland, the Greek Solidarity committee was formed, and in the run up the February 2015 General Election, and again during the “bailout” referendum of July 2015, social media sites were chockerblock with comment and opinion on events in Greece. DCU professor Emerita Helena Sheehan was one of the most prominent commentators, and one of the most active of those in Ireland engaging with SYRIZA and events in Greece.

Interest in SYRIZA and Greece has since receded, but Sheehan has maintained her gaze. She has extensive contacts in Greece, and is friendly with protagonists on the different sides of Greek left politics, which adds dimension and context to her writing. The book begins when SYRIZA is moving from being a marginal force to a mainstream one, to its eventual capitulation to the forces it once claimed to oppose.

The book provides readers with an insight into Greek life under austerity. Not surprisingly, given her background, Sheehan focuses on academic and political contacts, but it is often others who provide the best insights. Interviews and conversations with vendors, tourism workers, students and many others provide for a sobering record of the consequences of austerity, as well as the political response by the Greek left and social movements.

This is very readable and useful account of what was to prove to be a false path building a left response to the neoliberial onslaught. It will engage anyone with an interest in left wing politics or Greek society.