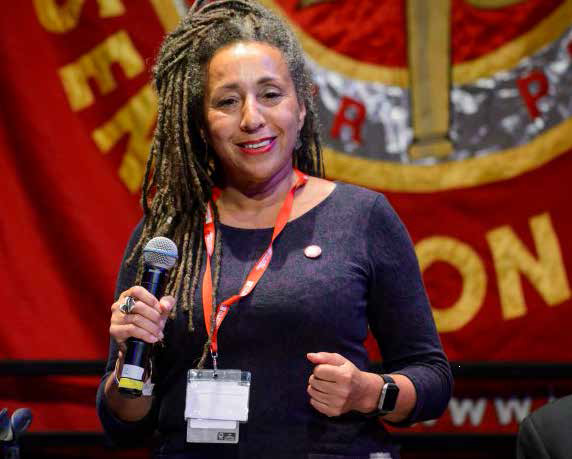 In a performing space in the Metropolitan Arts Centre in Belfast, a group of people gathered to see a play. Over the course of the following hour or so, the audience is made to tackle, head on, the effects of racism, McCarthyism, party politicking, spin-doctoring and fake news.

The impact of the play in confronting these issues is magnified by the intimate nature of the setup, with audience and performer only feet apart; but also because it is auto-biographical. This is the story of Jackie Walker, as told by Jackie Walker, the veteran socialist and anti-racist campaigner. It’s her experience of institutionalised racism and of trial by media. The latter experience, akin to lynching, she says, is how the origin of the show’s title.

Through the experiences of her parents and herself, she displays where she got her radical socialism and her drive to see the freedom for all humanity. Her mother, Dorothy Walker, was born in Jamaica. In the 1950s, she was accepted into Howard University in Washington DC to train as a doctor. She became involved in the growing struggle for civil rights, with the threats of lynching and Jim Crow laws ever present.

It was here that she met Jackie’s father, Jack Cohen. Of Russian Jewish descent, he was a communist and was also involved in the struggle for civil rights. They both travelled south to join the fight and boarded segregated buses in defiance of the apartheid laws.

The McCarthyist witch-hunt of the time eventually came for them, and the couple were targeted by the CIA. Dorothy was incarcerated in a psychiatric asylum where she was subjected to solitary confinement and shock therapy. Released in 1951, they set up home in Harlem, and Jackie was born. Eventually, Dorothy would return to Jamaica with her children.

Later, like so many Afro-Caribbean people in that period, she and her young family travelled to England. This is the environment in which a young Jackie experienced the harsh reality of institutionalised racism. The infamous signs declaring “No Irish, No Coloureds, No Dogs”, their home attacked and windows smashed, being spat on in the streets. These hateful events and more began to shape her political views.

The style in which Jackie tells her story, and that of her parents, forces the viewers to almost experience it themselves. Of course, it is almost impossible for myself to know the true impacts of racism, but given the intimate setting, the simplistic

set which forces your attention on Jackie telling her story generates a level of empathy that a thousand documentaries on the topic could never achieve.

Her mother’s death when still a child gave her stark experience of the indifference of the state in relation to poverty, with the damp, cold living conditions contributing to her illness. These experiences of economic inequality and systemic racism confirmed in Jackie the desire to struggle for a new and better world.

Jackie initially joined the Labour Party in 1991, viewing it as a socialist movement. Leaving around the time of Tony Blair’s leadership and the “democratic changes”; as she sarcastically describes them. She would eventually re-join after his resignation.

She has taken the show on an extensive tour around Britain, including a spell at the Edinburgh Fringe and as a fringe event at the British Labour Party conference. Its staging and tour has come up against large amounts of opposition from both within and outside the broader Labour movement in the UK.

Her history of involvement within Labour had always been to the left of its ‘broad church’. She was involved in anti-racism campaigning, a steadfast

opposition to Zionism and in helping organise meetings in support of members like Tony Benn, Michael Foot and Jeremy Corbyn.

It’s this involvement and history of organising that attracted the ire of those on the Labour right and the broader mainstream media. Jackie tackled these issues in particular in the second part of the show, as well as in a Q&A session afterwards.

Jackie was eventually elected as the vice-chair of Momentum. With this higher profile position, the forces rallying against Corbyn moved to spin and twist her positions in order to damage him. They took comments on her personal family history around slavery in the Caribbean and South America as an anti-semitic assault. Her comments on the controversial IHRA definition of anti-semitism; that it would disallow any criticism of Israel as a state, were captured on video and edited to create the image that she was against any definition of anti-semitism.

The style in which Jackie tells her story, and that of her parents, forces the viewers to almost experience for it themselves

With her personal family history and her activism in anti-racism campaigns it becomes hard to believe; but with the end goal of damaging Corbyn, it becomes clear that there is no ends to which his opponents will go.

Speaking after the show, she details how these opponents truly are within and without the Labour movement in Britain, right up to the highest levels, even going as far as to say that “There are Zionists who are part of the (Labour) National Executive.”

Her solution to counter this is a new and radical democratisation of the Labour Party; “There’s no other game in town.” The Labour right have worked with the large, bureaucratic backing of some unions and with support from right-wing members, they will be difficult to shift.

With a more democratic method of selecting candidates, National Executive Committee and other roles in the party; a move to a truly socialist party could occur. And this is at the core of Jackie’s motivation. She couldn’t have put it any clearer herself when she said; “The time to fight for human emancipation is now! The time to fight is always now!”

Paddy Wilson attended a performance of the The Lynching in November 2017.