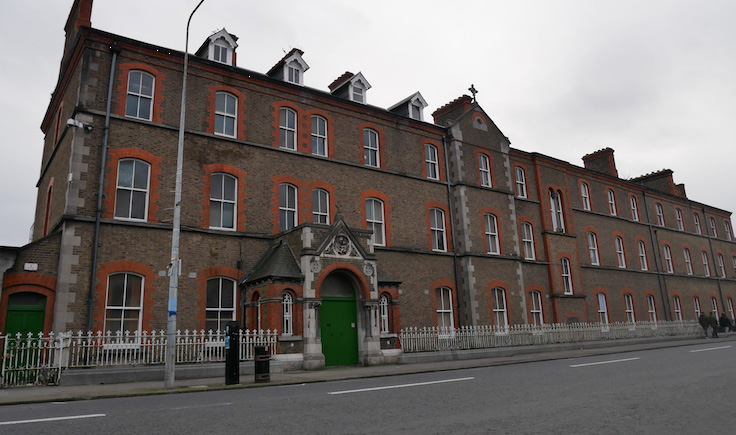 Francis Donohoe reports on the the unified campaign by leftwing groups and elected representatives for a permanent solution to the housing crisis.

The site of the former Central Mental Hospital and a former Magdalene Laundry in Dublin have become the focus of major battles by activists in the Campaign for Public Housing.

Dundrum Housing Action is leading opposition to an attempt by the government to giveaway the 27-acre former Dublin Central Mental Hospital site. The group, which is affiliated to the Campaign for Public Housing, has organised protests outside Dun Laoghire-Rathdown Council meetings and the offices of the Minister for Housing, Planning and Local Government, Eoghan Murphy, to express opposition to the proposed sale of the site and highlight the wider housing crisis.

Campaign for Public Housing activist, Brian Leeson, said: “The former Dublin Central Mental Hospital site should be used to provide affordable homes to hundreds of local families, not to generate super-profits for developers, speculators, landlords and the other property vultures that feast on our need for a home.”

Leeson said such a development on the site would be part of a wider solution to the housing crisis. “There must be a dramatic increase in the provision of public housing to provide long-term affordable homes to the hundreds of families that are already on the housing waiting lists across the country”, he said.

“As in many other European countries public housing must be opened up to all citizens who need a home, regardless of their income, only then can Ireland be freed from the tyranny of the landlord and housing profiteer.”

In the northeast inner city of Dublin an estimated 3,000 public housing units are needed to home those of local authority housing lists. One of the few remaining large publicly-owned sites in the area is that of a former Magdalene Laundry on Seán McDermott Street. Rather than develop much needed public housing on the site, council officials have proposed that it is sold to a hotel chain.

If they won’t build housing here, where exactly do they plan to build the 3,000 units needed to clear housing waiting lists in the area?

Campaign for Public Housing activist councillor Éilis Ryan, who represents the area, said: “Selling Dublin City Council owned land for a commercial development in this area is an absolute scandal. If they won’t build housing here, where exactly do they plan to build the 3,000 units needed to clear housing waiting lists in the area?”

Ryan said that that public housing on the site would serve as a ‘living memorial’, to survivors of the Laundry. “Two thirds of homeless families are lone parent families. We may not lock up unmarried mothers anymore, but we also don’t grant them the dignity of a secure home. Nowadays, the suffering is no longer caused by the church – instead it’s brutal, greedy developers and landlords, facilitated by our government”, she said.

Campaign members also staged a series of protests against the proposed sale of €4 billion worth of distressed mortgages to vulture funds by Permanent TSB. In addition to placing pickets on branches in Artane, Dundrum and Phibsborough, campaign activists occupied the Permanent TSB branch on Grafton Street.

Speaking about the occupation, Joan Collins, TD and Campaign for Public Housing activist, said: “This sale is just the beginning. If it’s allowed to go ahead, Ulster Bank and many others will take it as the starting gun to begin similar, mass sell-offs of any mortgage not making them enough profit. Our occupation is intended to show the government that, if these loans are not stopped, there will be a fight back.”

“The purpose of our Campaign is to ensure that those who are causing the housing crisis – government, banks, estate agents, developers – are not allowed to continue with ‘business as usual.’ Our occupation intends to deliver that message firmly to Permanent TSB. They cannot be allowed to put the lives of almost 20,000 households in jeopardy and not be held to account.”

“We want the state to take ownership of all buy-to-let mortgages caught up in the TSB sell off – and effectively become the landlord of those 7,000 tenants. It’s a win win – securing the tenants’ homes, and expanding the public housing stock overnight.”

For more information on the campaign and how to get involved visit the ‘Campaign for Public Housing’ Facebook page.