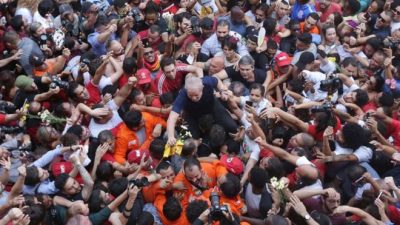 The anti-democratic offensive in Brazil that began with the impeachment of leftist President Rousseff in 2016 has intensified in recent weeks with high profile assassinations of left-wing activists; threats of military intervention and even the jailing of former President Luiz Inácio Lula da Silva. Piece by piece any progressive reforms implemented under the fourteen years of Partido dos Trabalhadores (PT) rule are being dismantled by the old ruling class that opposes any changes to the obscenely unequal and deeply racist system in Brazil.

This hostility to democracy, the poor and people of colour was on full display in the wake of the assassination of Marielle Franco. Franco was a Partido Socialismo e Liberdade (PSOL) City Councillor in Rio de Janeiro gunned down along with her driver in public  last month. Her murder (likely by off-duty cops) for standing up to racist police terror in Rio’s slum-like favelas, followed the military takeover of Rio state’s security at the behest of the federal government.

On April 8th, Black community activist and potential witness in the case, Carlos Alexandre Pereira Maria, was murdered in similar circumstances. Murdering an elected official with impunity highlights the confidence of reactionary forces in the post-coup political climate.

Following a brief standoff at the headquarters of the metalworkers’ union in São Paulo, Lula was arrested and taken to prison to begin his 12 year sentence. There is little to no evidence for the charges against him and the circumstances surrounding his conviction and the order for his arrest are dubious, to say the least.

On the day of his arrest, two images emerged that were symbolic of the polarization of Brazilian society: Lula being carried by thousands of his supporters with outstretched arms and the grotesque display at an infamous brothel where members of the far right watched as a pimp toasted the right-wing judges responsible for Lula’s downfall by abusing a woman onstage. The latter incident is perhaps a foretaste of what Brazil will be like now that Lula is almost certainly out of the presidential race.

The sister organizations of the Workers’ Party of Ireland, Partido Communista Brasileira (PCB) and Partido Communista do Brasil (PCdoB), have been to the forefront in the fight for the preservation of democracy and the gains made by working people in recent decades. PCB militants have been part of protests throughout the country and PCdoB leaders were with Lula right up until his arrest.

PCdoB are also running their own presidential candidate for the first time. Manuela d’Ávila, a young State Deputy from the South of Brazil, has so far led a vibrant campaign that is supportive of Lula but nonetheless seeks to advance an independent Communist position with particular focus on feminist issues.

Despite the repressive environment, the Communist and mass organizations of the working class and poor remain strong and the fight for a better Brazil continues.

The Brazilian Left Front, an organisation of Brazilians living in Ireland fighting for social justice in Brazil, have recently held two successful protests in Dublin city centre, highlighting the assassination of Franco and the threat posed to democratic freedoms by the treatment of Lula.

For a longer piece on the political situation and the coup in Brazil get the latest edition of LookLeft Magazine, in shops now.