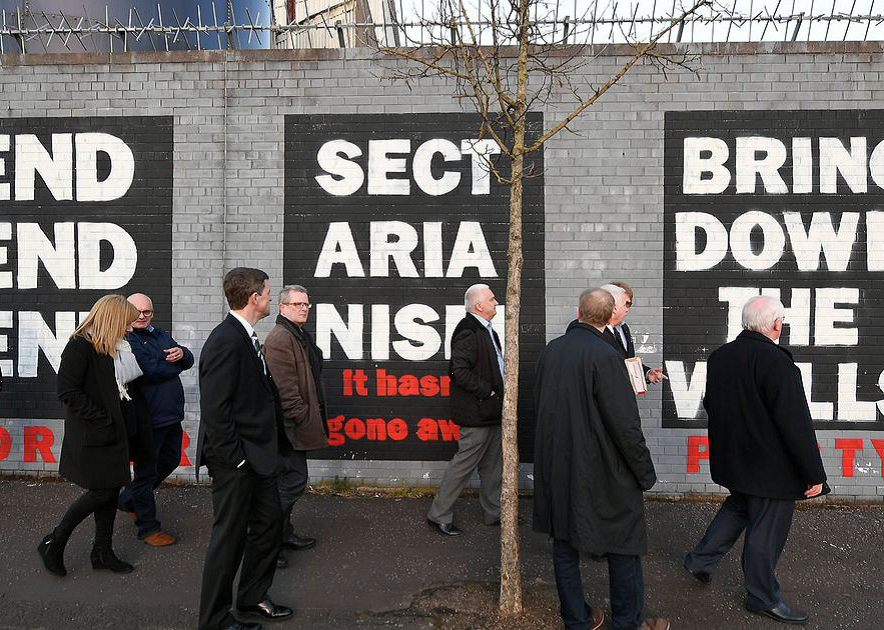 The recent period has been a busy one in Northern Ireland politics and yet in relation to everyday life for most people, nothing of substance has happened. Elections have seen a continuing strengthening of the positions of both Sinn Féin and the DUP. There have been talks about reconvening the Assembly, with internal DUP opposition to a stand-alone Irish Language Act the stumbling block in early 2018. Overall the picture is one of failure and distrust.

A question is why is it that the two most sectarian parties, who seem to find it hardest to work together, have become the joint governing powers in Northern Ireland? The answer to this lies in the politics of sectarian accommodation that were set in place in the Good Friday Agreement (GFA) of 1998 and the Assembly which developed out of it. Both share the basic idea expressed earlier in the Anglo-Irish Agreement (1985) that, “a condition of genuine reconciliation between unionists and nationalists is mutual recognition and acceptance of each other’s rights”. Subsequent to the GFA, the structures and protocols which emerged out of this thinking included the mandatory identification of Members of the Legislative Assembly (MLAs) as ‘nationalist’, ‘unionist’ or ‘other’, and an enforced executive coalition in an assembly with sectarian veto rights. These structures institutionalised sectarianism and were a recipe for recurring instability.

The kind of system of government that was developed, known in academic circles by the unwieldy term ‘consociationalism’, was based on the belief that difference could be managed by a governmental elite made up of sectarian parties and that those in favour of a more radical integrationist approach to government naively deny the stubborn reality of sectarian difference. As John McGarry, one of the chief academic supporters of consociationalism put it in 1995, “the problem with integrationist solutions is that they require a willingness to be integrated, and no such willingness exists in deeply divided societies”.

These structures institutionalised sectarianism and were a recipe for recurring instability

This kind of ‘realism’ denies the common experiences of workers in capitalist societies as well as the opinion poll evidence in Northern Ireland showing consistent support for integrating or mixing in schools, employment, housing and socially. Moreover, it fails to explain why politicians on all sides in the Executive endorse the same free market economics which materially disadvantage the working class majority. Academic Paul Dixon notes that “those in poverty, often located in the most highly segregated areas, have suffered most during the recent conflict, yet have benefitted least from the peace”.

Consociational government aims to produce a kind of voluntary apartheid in which each ‘side’ chooses among representatives from its own political ‘community’. For Paul Dixon it is the DUP and Sinn Féin, “the most segregation-oriented parties, [who] continue to benefit electorally from continuing communal antagonisms and segregation”.

In Derry in 2011 Sinn Féin’s Gerry MacLochlainn perfectly expressed ‘consociationalist’ thinking when arguing in favour of the erection of a new 170-metre long ‘peace line’ in the area. MacLochlainn told a meeting that “it is unfortunate that we have to put up these fences but there is a saying that ‘good fences make good neighbours’”.

The consociationalist arrangement also explains how people broadly support integration while at the same time the votes increasingly seem to go to the extremes. Northern Ireland Life and Times survey reports consistently indicate that 47% of the electorate consider themselves to be “Neither Unionist nor Nationalist”, with that figure rising to 55% of those under 44. According to Queens University academic Katy Hayward, “The electoral dominance of Sinn Féin and the DUP is not an expression of passion for hardline nationalism and unionism – it is a consequence of moderate voters’ fear of what hardline nationalism and unionism would mean for the fragile stability of this place. So centre-ground voters end up …voting for the party best placed to block the hardline position that they most fear. And as they do, the complexity, the messiness, the nuances of Northern Ireland is wiped over by the simple narrative of distrust and division and blame. Most in Northern Ireland don’t want to be forced to choose between Britain and Ireland – they shouldn’t have to.”

If and when the Stormont Assembly is resurrected, unless it moves away from the separate but equal ideology of consociationalism, it will continue to be riven by crises and will continue to do a profound disservice to the working class majority in Northern Ireland.