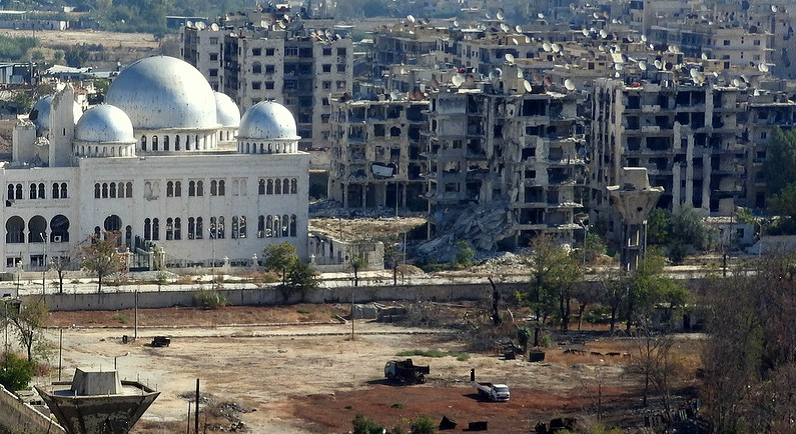 Jules Fitzsimons was among a group of peace activists who recently visited Government-held areas in Syria during 2017, James O’Brien talked to him about what he saw in the war-torn country.

“The people are cleaning up their streets. That’s what I saw in Aleppo,” says Jules Fitzsimons. “Everyday people clearing away the rubble, planting trees. As soon as the Syrian Government moves into an area they get straight to work, restoring electricity and water.”

Curious to speak to ordinary Syrians and hear first-hand their experiences of the country’s civil war, Fitzsimons travelled to Syria in March 2017. The trip was organised by an Irish peace group. It involved flying into Beirut in Lebanon before travelling by road to Damascus and then on to Syria’s largest city, Aleppo, half of which had been held by rebel forces until they were finally expelled by the Syrian Army in December 2016.

While the trip was not organised on behalf of the Syrian government, the group did meet with Syrian government officials. They also met with several other organisations including a group of young people in Aleppo who had set up a Non-Governmental Organisation (NGO) assisting children in the war damaged city.

“A few of the guys who did the trip were artists,” says Fitzsimons. “One of the guys, an Australian chap, had just said beforehand that he was going to go to Aleppo and asked if anyone wanted to give a few books to do an art class. He got a couple of thousand dollars, which enabled him to distribute a large amount of books and materials to Syrian kids, which was great.”

In early 2017 approximately 70% of Syria’s approximately 18 million people were living in Government held areas of the country. Speaking to some of the ordinary Syrians the Irish group got a glimpse of their view of the conflict. A barber in Aleppo explained to Fitzsimmons how the warren-like streets around his business and home had become a site of intense fighting, with some people from the area joining al-Nusra (a large faction among the rebel forces which is aligned with the Sunni fundamentalist terrorist organisation al-Qaeda) and others fighting them.

Fitzsimons recalls the barber explaining how “al-Qaeda/al-Nusra, had tried to take over the street and he had been involved in killing a bunch of them”. When the shop owners returned to their businesses after the siege, “they found many dead bodies inside”.

Fitzsimons was particularly struck by the resilience of the Syrian people. “I didn’t know what to expect when I got into Damascus for the first time. But we got in straight into rush hour. We were going to the university, just going down these big streets full of primarily young people. There was just loads and loads of people on the streets, just people in groups having ice cream”.

Of central Damascus he said, “There’s not that much danger but a random rocket could come and hit you. From the suburbs the rebels would send unguided rockets. They’d fire them but they’d also do random suicide bombing attacks.”

The Syrian civil war has been widely reported in the western media as a sectarian conflict pitting Sunni Muslims, who make up nearly 70% of the country’s population against Shia Muslims and in particular members of the Alawite Shia Muslim sect of which Syrian President Bashar Al-Assad is a member. However, Fitzsimons is adamant that the people he spoke to in Government areas were secular and anti-sectarian, seeing themselves as Syrian first and referring to their country as a “mosaic society”. Fitzsimons was impressed by this as “the [rebel] side is taking an extremely sectarian line but they refuse to do that.”

To make his point, Fitzsimons highlights the efforts made at all levels of society to ensure equal treatment:

“Both Christian and Muslim leaders will go to each other’s ceremonies and the people as well. There’s a guy here in Dublin who is from Aleppo. He left Syria last year as a refugee. He doesn’t support the Government but he doesn’t support the ‘rebels’ more. He’s a Muslim. He was saying he would – just as a normal thing – go to Christmas mass and so on.”

On the topic of support for the government, Fitzsimons says that the people he met were forthright in discussing their problems with the government, especially the rampant corruption. However, he explains how “everyone would have criticism of the Government and so on but in an incontestable manner they would say that the ‘rebels’ are worse.”

Moreover, they saw the civil war which had torn their lives apart as a proxy conflict: “They would say that there are some Syrians [fighting against the government] but they would primarily see it as people from the outside trying to destroy the country.”

When pressed on how the Syrians he spoke to felt the conflict had arisen, Fitzsimons explains how “they gave some examples over the past decade or concerning parts of the country where places like Saudi Arabia have been allowed invest into them, to make mosques and so on”. Through these mosques the extremist Wahhabis fundamentalist interpretation of Sunni Islam, which is the state ideology of Saudi Arabia had been allowed to get a foothold. The influence of the Wahhabis interpretation of Islam was also brought about through Syrians, particularly from rural areas of the country, working in Saudi Arabia in recent years.

Fitzsimons was particularly struck by the resilience of the Syrian people

Fitzsimons explains that people in the government controlled areas had a clear understanding of who was helping them, with the group meeting “one guy driving in a bin truck who was making geopolitical statements, with pictures of Assad, Nasrallah [the leader of Hezbollah], Putin and the Chinese premier, Li Keqiang, plastered on it.”

Fitzsimons is scathing of Western NGOs operating in Syria: “One of the things they boast about is how they’re helping Syrian people with water, which they’re not really. The Syrian government has already built the water infrastructure and what [the NGOs] have done is hooked up some generators to pump the water and that’s just in the al-Qaeda areas, which is less than a million Syrian people who are trapped there as hostages, not allowed escape. Whereas just a few hours’ drive is a city of two million [Aleppo] people who have no water because the public stations have been sabotaged by al-Qaeda.”

The negative view of NGOs arises not just from the work undertaken in Syria but from the role that many took in calling for Western military intervention against the Government. Fitzsimons says that these NGOs call for ‘action’ from Western Governments, “but they’ve already done the maximum [economic] action; they’re already fully sanctioning Syria”. In reality he believes that many NGOS are “calling for the total destruction of the Syrian state”.

“It’s bonkers,” Fitzsimons says of the current situation. “You go through cities that are shattered the same as you would see in Berlin 1945. Back then there was the Marshall Plan to rebuild but it’s the opposite now. There are sanctions on any company that tries to rebuild. It’s an opposite Marshall Plan to keep them destroyed”.

Yet despite the horrific effect of the war on their country, Fitzsimons found that the people he met in March 2017 were positive about the future “and they’re even more positive again since then” he added in reference to the more recent advances by the Syrian Army.