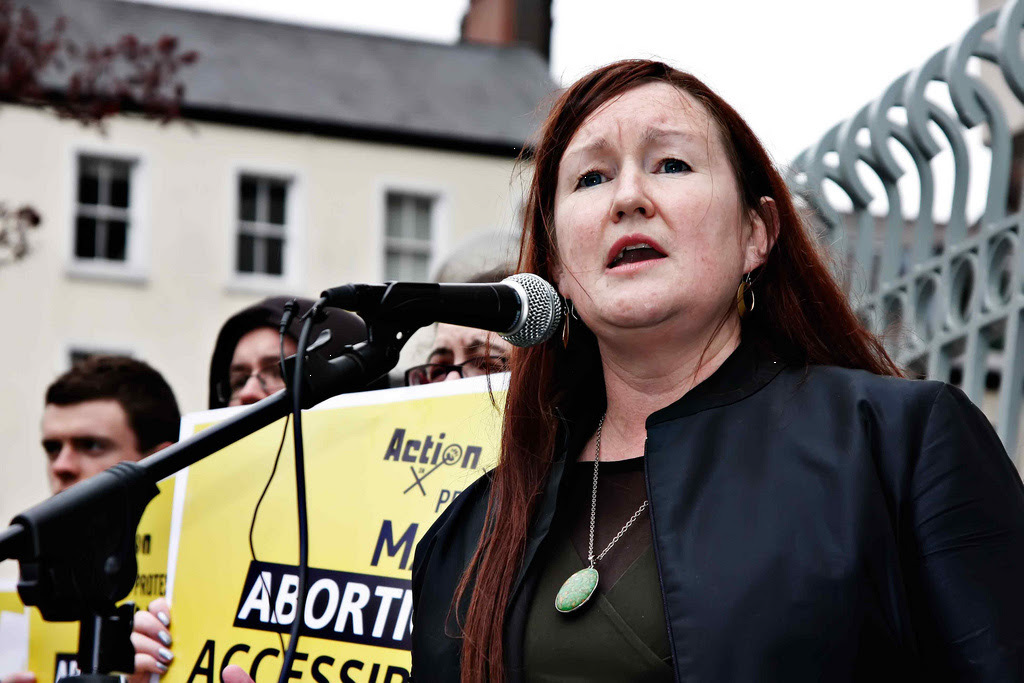 In January 2018 a new leadership team took the reins at SIPTU, among them Ethel Buckley, who discusses the future of Ireland’s largest trade union with Deirdre Dunne.

In recent years, Ethel Buckley has been at the forefront of high-profile SIPTU campaigns, supporting the Clerys workers, fighting for better conditions for female international footballers and organising low paid workers in the services sector.

However, her election as SIPTU Deputy General Secretary for Organisation and Membership Development will see the 45-year-old from Cork take on her greatest challenge yet; developing trade unionism in Ireland for an age when precarious working conditions and technological developments are reshaping the very nature of work.

LookLeft met Ethel in Liberty Hall, the SIPTU headquaters in Dublin, shortly after her election to discuss her political development and what she sees as the priorities for the country’s biggest union. She did not make light of the task she and her colleagues in the SIPTU leadership faced.

“The proportion of workers who are members of unions is dropping. This is not a good thing for society because there is a very clear link between income inequality, inequality in education and health outcomes and low trade union density. The opposite of course also holds true, a greater proportion of people organised in unions leads to reductions in inequality.”

Buckley added: “There has been an attempt to sell workers the idea that there is enough legislation to prevent employers from exploiting them. There has also been an attempt to sell younger workers an idea that unions are a thing of the past. In some ways I think unions contribute to that image by being overly-focused on our past. I am more interested in the future of the trade union movement than I am in the past.

“The history of the movement in Ireland does provide us with great inspiration from past leaders such as Helena Moloney, James Connolly and Jim Larkin. However, my main aim is to help workers to rise up and create new role models, new sources of inspiration in the fight for the future of work.”

Buckley began working for SIPTU in 2000. She believes that becoming a trade union organiser was a natural progression from years of activism on the left, in the community and within the labour movement. Her activity has remained focused on trade union work rather than electoral politics, and she is not affiliated to any political party, calling herself “a non-aligned socialist.”

“As a teenager I was first politicised by gender discrimination and that was the thing that attracted me to progressive politics. As I moved into my later teens I began to develop a class analysis but initially feeling the discrimination that a young woman does was what politicised me.”

She adds, “There’s still many battles that women in Ireland need to wage and win. I’m very enthusiastic about the stage of politicisation of young women in the country at the moment, in fact I don’t think it’s ever been better in my lifetime. I think for a time women, especially middle-class women, thought that the battles had been fought and won, and that they could abandon feminism. That clearly is not the case
and for various reasons I think these days teenage women and women in their twenties are very politicised and aware of the structural discrimination they suffer.

“A lot of them have been politicised by identity politics and issues around reproductive rights. It has been great to see a whole new wave of young feminists join the fight to repeal the Eighth Amendment. A key concern of mine would be that their energy is also focused on becoming politicised around economic justice and challenging the stark economic inequalities in our society.”

The struggle for gender equality is one that Buckley intends to not only highlight outside of the trade union movement.

“I am a feminist since I was a teenager and I intend to use the role that I have been elected to to work within the union to increase the participation of women as shop stewards and in the decisionmaking committees. We must be realistic and accept that, as with elsewhere in society, chauvinism needs to be tackled in the trade union movement,” she said.

“Even though Patricia King leads the movement as the General Secretary of ICTU (Irish Congress of Trade Unions), it is still very male-dominated and male-orientated. A role for women like me, and Patricia I believe, is to show other women that it is possible for them to effectively lead in the workers’ movement. Particularly for me, it would be great if I could show women that it’s possible to balance having a young family and being a trade union organiser.”

Buckley believes that the struggle for gender and economic justice is best approached as one rather than separate concerns. During 2017, she was central to highlighting gender inequality in Irish sport through the role she played in the highly successful campaign by the Irish Women’s National Football Team, backed by the Professional Footballers Association of Ireland and SIPTU, for improved conditions.

“The organisation of the national woman’s football team was a classic campaign for women’s rights. It had a massive impact. It seemed to kind of capture the zeitgeist of 2017 with women in all walks of life saying they had had enough with discrimination. The image of the team standing outside Liberty Hall with the green Respect t-shirts on is an iconic image. Their stand provided young workers with an inspirational role model, Emma Byrne, who was the captain of the team and effectively their shop steward.

“It the coming years I intend to remain focused on tackling inequality between women and men in sport”, she added.

However, it is the spread of precarious working conditions, where workers are maintained on short term contracts, often with irregular working hours or forced into bogus self-employment, which Buckley sees as her trade union’s largest immediate concern.

“I have spent many years organising low pay workers in the private sector, some of whom don’t know from day to day, from week to week, how many hours they’re going to get or what their earnings are going to be. Their working and housing situations are very precarious. It was to unite workers in such situations to fight for better conditions that my union was established over 100 years ago. The fight against casualisation and precarious working and living conditions is once again as important as it was then.

“Legislation won’t sort it out for workers. The best way for working people to make at least their working lives better is to organise in the workplace and in their community in trade unions. I truly believe that, and that is the reason why I committed my life to being a trade union organiser.”

One of Buckley’s key responsibilities as a SIPTU Deputy General Secretary will be union organising. Concerning that role, she says: ‘That is what I am most passionate about, organising people into the union, convincing people to join the union. I’m really inspired by some new organising techniques that are being used in unions internationally and I’m excited about encouraging a new generation of young people to organise into the trade union movement.”

Our agenda must be a broader agenda than just workplace issues

She added: “The slogan of the union that I’m a member of is ‘organising for fairness at work and justice in society’, we don’t see our role as limited to the workplace. Improving our members’ jobs in the workplace and increasing pay and working conditions for people through collective bargaining is a fundamental of our work. However, what’s also fundamental is a focus on the wider community that our members live in, the wider society and the wider labour market. Trade unions have to have a political agenda and we don’t make any apology for that.

“We attempt to utilise the power of our union to leverage a more just society and a more equal society. That’s why SIPTU is centrally involved in a broad coalition campaigning for a Local Authority-led public housing programme in response to the housing crisis, repealing the Eighth Amendment, LGBTQ rights, these are as intrinsic to the union as campaigning for better pay in the workplace. Our agenda must be a broader agenda than just workplace issues.”

If SIPTU is to continue to achieve such a wider relevance and develop it, Buckley believes it must engage effectively with communities and new forms of communication. Since 2010, SIPTU has reorganised internally along economic sector lines, bringing together workers according to their industries rather than geographic area. One of Buckley’s areas of responsibility will be promoting SIPTU Districts Councils that once again connect members within localities.

“I’m really looking forward to getting out on the ground and building our organisation in communities across the island through the District Council network,” she said. “The District Councils will be the campaigning wing of our union in the future. We intend to mobilise our members in their communities to tackle the issues that are relevant to the community, that’s a really exciting and challenging part of my work.

“Another area for which I am responsible is union communications. People receive their news and consider news in completely different ways than they did ten years ago. I think SIPTU has done fairly well in responding to the new forms of media but we can always improve and we will need to improve.”

She added: “How we communicate is key to education and training within the union. I passionately believe that the trade union movement needs a strong education wing. Not just practical education on how to represent people, to organise and negotiate, but political education as well, to tackle some of the gaps in the education that people receive outside of the movement.

“In a digital age we can do that in new ways. Traditionally people would have come into a union hall for a couple of days’ training but there are all sorts of new ways in which we can bring the union to our shop stewards. Through new media platforms we can effectively democratise union education.”

With many areas of responsibility within newly-established SIPTU leadership structures, Buckley will face many challenges, but she believes the opportunities outweigh the possible pitfalls.

She concludes: “I think this is a really exciting time to be coming into the leadership team of SIPTU because it’s a challenging time. There is no doubt that the union will need to change to react to new circumstances in the labour market and the new expectations of members. That’s the challenge that I put my hand up for and that the members have entrusted me with.