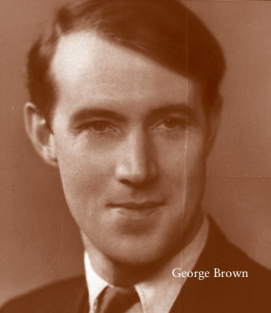 It was a hot Saturday afternoon when I arrived in Villanueva de la Cañada. I was travelling to visit the place where George Brown, Brigadista from my home village of Inistioge, County Kilkenny, had died during the Spanish Civil War.

Ironically, the first place I arrived at when stepping from the bus was an Irish Bar, so I stopped to raise a cold class of beer in his honour. Sitting amongst the chatting locals, eating tapas on a peaceful weekend, it was hard to imagine that there had ever been unrest in this place.

It was 1937 when George Brown died in the Battle for Brunete. The XVth International Brigade was diverted on route to the mountains, in order to provide support to the Spanish Brigade who had failed to take the town of Villanueva the previous day. A small pocket of fascists still occupied the town, with a machine gun on top of the church tower.

That same church now frames one side of a square, with a cooling, tranquil fountain to the centre. On the pink tiles at the apex of the church tower, storks had built a peaceful messy nest. I sat for a while on a bench, wondering at the bullet holes which might lie hidden underneath the clean, white stucco of the municipal buildings.

Arriving by bus from Madrid, I was immediately struck by the heat and formidable terrain of the plains below the hills and surrounding the town. Accounts state that the XVth [International] Brigade was totally unprepared for the soaring temperatures and unforgiving sun twelve hours each day. Without shelter or shade they used their water rations too rapidly and threw away tins of food to lighten their packs. They later paid the price for this with dehydration and fatigue.

George Brown was a political commissar and commander of his unit. They arrived into Villanueva in early evening and saw a group of women and children wandering towards them. At first, they assumed the group were fleeing the village, but, in fact, the fascist forces were using them as a human shield to exit the town. The fascists then used small machine-gun fire and hand-grenades to surprise the Republican forces. Innocent women and children were killed in the messy conflict which ensued. George Brown was wounded and then later shot by a fascist officer as he lay on the ground.

Villanueva is now a thriving little community, with pavement tapas bars and a much-expanded population. It is testimony to the new Spain; the new Europe; the electronic age. I sat in that little Irish Bar and used my phone to record all I saw; far removed from the bloody, dusty battle of eighty years ago. My imagination was stretched to believe that any of the conflict could have been real. One man, born in a tiny village in Ireland, with such conviction and integrity that he willingly gave his life to defend his ideals. All this a few hundred yards from where I sipped on my cold beer and watched children play under the shade of the trees.

Paddy Murphy was also a child of Inistioge. A life-long freedom fighter and politically courageous man, he founded the George Brown Memorial Committee when he was well into his eighties. He wanted George to be remembered and the commemoration to be used to draw parallels between Spain and current Irish and international events. Sadly, Paddy died before the 2016 event. I made my small pilgrimage to Villanueva in June 2016 to remember George Brown and in honour of my friend, comrade and fellow-musician, Paddy Murphy.

The men and women of the International Brigades had the understanding, vision and courage to recognise and fight the rise of fascism. Many, like George Brown, paid the ultimate price. Walking down the pretty, tidy streets of the small town, I listened to summer swallows swoop and soar. I tried to imagine the chaos of battle juxtaposed through time on those same streets. With each step, I wondered whether I was near the spot where George Brown fell.

Such sacrifice should not go unmarked. The late PaddyMurphy and Sean Walsh knew this, by ensuring the remembrance of George Brown, through the memorial event, they sent me on a journey to a small town in Spain, to take photographs, to write about my experience and to pass on a story. That is the nature of the past and of politics; we are all torch-bearers, carrying a message to the future and to the next person who may be ready to grasp it.

Amanda Richards is a member of the George Brown Memorial Committee which holds an annual commemoration event in August in Inistioge, County Kilkenny.