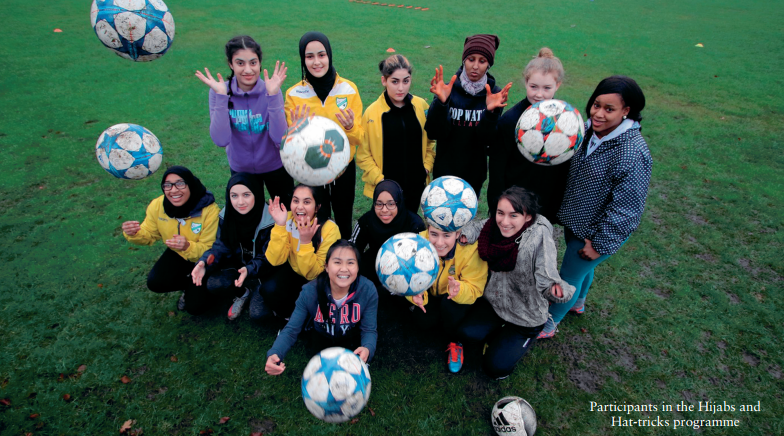 From organising soccer tournaments for Dublin’s African comunity, Sport Against Racism Ireland has developed into an organisation confronting all forms of discrimination through many different games. Ricahrd O’Hara talked to SARI co-founder Ken McCue.

Ken McCue, SARI Cultural Planner, is a founder member of the group and believes that they timed it just right. “It was a crucial time to do it. In many ways we reacted to [racist] graffiti on the walls in the Smithfield area of Dublin, kind of low level stuff. I mean, ask any Traveller, there was racism here before migrants came. We knew that some people would transfer their racist attitudes towards the migrants coming in.”

For Ken sport, politics and campaigning are integral to one another.

For Ken sport, politics and campaigning are integral to one another. A lifelong progressive activist himself, his family was steeped in the history of the left in Dublin, his grandfather a syndicalist who worked in the printing trade and a member of the Irish Citizen Army for a time. He adds: “I had a sporting background too. My father and brother were professional footballers. My father had captained Bohemians [football club in Dublin], so football in particular was in the family. I was also interested in music and I’d seen how successful Rock Against Racism had been in the UK.”

Initially called Soccer Against Racism Ireland, the group organised soccer tournaments pitting teams from the new migrant communities against one another and Irish teams. However, the organisation quickly sought to broaden its appeal beyond just soccer.

“We have 34 African communities represented in SARI”, says McCue, “In the beginning the Indian subcontinent, India, Pakistan, Bangladesh were hard to reach until we went into cricket really. That’s why we dropped the Soccer Against Racism and went to Sport Against Racism. So we would target the sport that the communities were interested in, whether it’s Chinese rope jumping, baseball, softball. Sport really is such a great integrator.”

With the Gaelic Athletic Association’s (GAA) position as the leading sporting institution north and south, it became a key target for SARI’s work. Ken said: “We targeted the GAA because we knew that they were in every parish on the island of Ireland. They had a very efficient system. My Dad used to say that the GAA was an amateur association run by professionals and the FAI (Football Association of Ireland) is the opposite. The GAA is in every parish in the Republic, you’ve got women’s football, camogie, rounders, hurling, football and then you have the cultural side of it as well. The club is the centre of the community.

“The work with the GAA came about when we approached [the RTE broadcaster] Gerry Ryan, and we convinced him that we would do this thing called, ‘Guess who’s coming to Dinner?’ The plan was to invite refugees from Direct Provision centres into your home to watch the hurling and football All Ireland finals and give them a bite to eat. So Ryan broadcast it and it was listened to by people around the country. It was huge, the response was incredible.’

He added: “I remember criticising the GAA for not going out into the likes of the migrant communities and the direct provision centres. Those kids won’t rock up to the door of the GAA club and say they want to play hurling if they’re from Kenya, you know. We had to get them to outreach instead of waiting for the communities to come in to them. I also pointed out the need to tackle other forms of discrimination like homophobia.

Former GAA President Nicky Brennan asked SARI to advise on drafting a plan to bring the organisaiton’s games into Ireland’s new communities. “It’s all very fine having a plan but it’s no good if it’s not implemented”, said Ken, “but I knew there was was a lot of goodwill in the GAA and it set up a committee to run the intercultural plan and it’s still running. They’ve made inroads into a lot of the games.”

McCue emphasises the impact the changes have made, for example encouraging clubs to hold meetings in mosques has allowed the GAA to pick up a number of talented young hurlers from a Pakistani background.

“We also started looking at how to get rid of any sectarianism in the GAA so we inserted a clause in the rules so that it became an anti-sectarian organisation. This meant it had to become more proactive in breaking down barriers, targeting all faiths, Protestant, Catholic, Dissenter, Muslims. Some of the girls in the ‘Hijabs and Hat-trick’s’ programme will tell you they weren’t allowed play soccer but they could play camogie and women’s gaelic football, there was no ban on the hijab in the GAA.”

In comparison to the GAA, McCue is highly critical of the FAI attitude to some incidents of discrimination. “There’s been a slate of complaints and they have a very poor record whereas the GAA sanction the clubs and they’re pro-active in dealing with it.”

He gives the example of Karpreet Singh, a young Sikh footballer asked to leave the pitch during a match for wearing his turban, “He was playing for his team, a referee called him over and told him to leave the field for wearing his turban. His Dad contacted me, so I contacted the World Sikh Council in Toronto and they had it all over their news.But the FAI wouldn’t bend on it and he was out of the game for a full year.”

He added: “Another example was when Joseph N’Do was playing for Bohs against Rovers in Tallaght Stadium and a sizeable part of the crowd were making monkey noises. It was live on TG4 so we brought a tape of the incidents into the FAI. However, in the referee’s report there was no mention of it so no action was taken.”

McCue believes that sport is a natural avenue for integration and that its universal popularity has allowed SARI to reach into all communities. “What SARI are doing is stretching it out to use football and sport as a way to tackle discrimination in society, not just dealing with racism but all forms of discrimination.

He highlights recent work that has been done with the Glentoran Academy to tackle sectarianism through football. “The programme is called Living Together through Football. Glentoran would have predominantly a Protestant support base, being in East Belfast, but would never have had an issue playing Catholics. They always had players from different traditions to their supporters but their academy in Glentoran has nearly 500 kids, and that’d be very close to 50/50 between both communities now and drawing them in from all over. I’ve seen kids from the Markets area and Short Strand walking around with Glentoran shirts.”