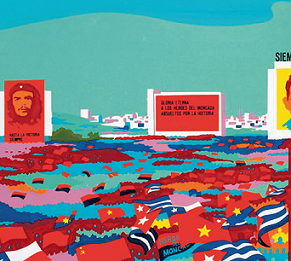 Within four days of my election to Seanad Éireann in August 1981 I was invited to join an Oireachtas delegation going to an inter-parliamentary conference in Havana, Cuba. I felt it a most suitable way for an unrepentant man of the left to be introduced to national politics.

Getting to Cuba involved flying to Madrid and then taking a Cuban flight to Havana. It was a long long haul but when you’re young, optimistic and excited those things don’t matter.

Our hotel was called the Havana Libre, having been renamed after the revolution. It was previously the Havana Hilton. To me it seemed luxurious and I grumbled about the cost to the taxpayer suggesting that, like sports people, we could all have shared rooms. In those days I probably underestimated the romantic aspirations of Irish politicians!

Fidel addressed the attendance early in the conference. He arrived in his, at that stage traditional, battle dress and spoke for the best part of three hours. He presented a view of the world which it was easy to agree with, most of the time. He talked about inequality, injustice, imperialism, and power. And he directed much of his fire at the US government, so much so that the small US delegation walked out. He moved on to Europe and, given that it was 1981 and ten hunger strikers had died, it was probably inevitable that he would launch into a eulogy to their bravery, as he saw it. He didn’t make any overtly political statements beyond saying how much Cubans admired self-sacrificing courage and going on to denounce the British government for allowing them to die. At which stage the UK delegation walked out.

Fidel was untroubled by the walkouts as were the remaining delegates and at the end he received a rapturous standing ovation from, as far as I could see, the overwhelming bulk of the audience. It was fascinating to see his support from delegations from countries in the so called developing world. Many were quasi dictatorships; few were what you would call left-wing, but all stood and applauded. It was spontaneous and it was sincere.

Some members of our delegation were unhappy with his references to the hunger strike. So it was decided to seek a meeting with him.

Days passed. The Conference moved on. Then at very short notice we were told that Fidel was ready to meet us. We were brought with much security through the many back corridors of the conference centre. There to meet us, be photographed with us, and greet us was Fidel. We sat down and a member of our delegation explained why we had asked to meet him in the light of his focus on the hunger strikes. He listened attentively via his interpreter, though I had the clear impression he had understood exactly what had been said, then he responded in Spanish.

It was clear he understood the essence of Northern Ireland’s problems. He knew there was a Unionist majority there and that Catholics had been badly treated and were a minority. He regretted the loss of life including those of the hunger strikers, and as he had said earlier admired their courage. But phrases like British withdrawal, or words like imperialism or colonialism did not enter the conversation. Fidel, it was clear, admired and respected the hunger strikers and believed that the British Government could have found a solution if they wanted to. But that was it. Whatever critics or friends may try to say now, Fidel did not feel it necessary to support the crude forms of Irish nationalism that surrounded the hunger strikers.

Enormous importance as a rallying force for the oppressed of the world.

On both occasions you couldn’t but be overwhelmed by the power of Fidel’s personality, by his eloquence, by his prodigious memory, by his deep compassion for the vulnerable, the marginalised and the downtrodden, and by his enormous importance as a rallying force for the oppressed of the world – especially for Latin America which was then moving into its era of coups and dictatorships.

Parliamentary delegations are often sheltered from local realities and anybody local I met could have been an agent of the state. But when you are taken on your own by taxi to visit the family of an acquaintance in a small and fairly primitive house on a narrow side street, when your acquaintance is a chemical engineer (as I am) and professes astonishment that you had to pay for your books, when your acquaintance’s sister is happily planning to study medicine, and his mother is attending night classes to learn English, it’s hard not to be impressed. And when your acquaintance