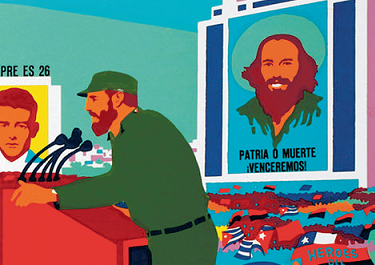 Comrade Fidel Castro was a political giant of the 20th Century. A man who never flinched once he began his revolutionary struggle to free the Cuban people from the US backed Mafiosi regime of Fulgencio Batista. After his triumph over this regime in 1959 his enemies never stopped in their attempts to turn the clock back and once again enslave the Cuban people in a capitalist vice which would be overseen by Washington.

Fidel recognised who the enemies of the Cuban people were for he had grown up under the Batista regime, backed by Washington and the Mafia. That is why when the revolutionary forces had consolidated their position in Cuba, Fidel took steps to ally his government and people with the progressive forces in the world who faced the common enemy – capitalism and imperialism.

Under Fidel’s government Cuba became a beacon of hope and inspiration to billions of people condemned to poverty and despair in Latin America, Africa and Asia. Cuba’s policy of giving its people full health care and education was an example to the world and it went further by sending medical teams and assistance to many countries.

In Ireland as well, the Cuban revolution was seen as an example of what could be achieved by revolutionary forces. I recall the impact that Fidel and his revolutionaries’ progress had on the thinking of myself and my comrades within the Republican Movement as many of us languished in Mountjoy Prison, Crumlin Road Jail, the Curragh Internment Camp or prisons in England during the late 1950s and early 1960s.

Studying the Cuban revolution was part of a wider process of coming to understand the connections between our struggle and those taking place elsewhere in the world. Fidel’s eventual triumph and path made clear that the fight for true freedom was one that would necessitate a broad social struggle against the forces of capitalism and imperialism – a struggle that had to be fought on a global scale.

Cuban international solidarity with revolutionary forces went beyond merely setting a shining example. When the people of Angola were fighting for their freedom against an attack led by the Apartheid regime of South Africa it was units of the Cuban Armed Forces who quickly put a stop to the fascist forces and their US backers.

While what Fidel achieved in Cuba became a most significant example to the many countries struggling under capitalism and imperialism in Latin America, Africa and Asia, the US learned nothing. By their ill-fated attempt to overthrow the revolution with the Bay of Pigs invasion of 1961 to their continued vile campaign of hate, sabotage, murder and of course a blockade aimed at starving the Cuban people into submission, the powers in Washington have attempted to undermine the will the of the Cuban people.

For decades the US defied resolutions from the United Nations General Assembly which condemned its blockade of Cuba. Other support for this illegal action only came from States such as Israel and the Virgin Islands. It is deplorable that some Irish banks also became part of this attempt to to isolate revolutionary Cuba by refusing to handle financial transactions which involved it.

It was most interesting in the period after Fidel’s passing to listen to the various so-called political commentators invariably spit out the usual line on Cuban repression and dissidents being imprisoned. None of these so-called experts ever give details to the activities of the dissidents who sought to murder Fidel, members of his government and party. It is widely accepted that there were over 600 plots to murder Comrade Fidel Castro, which gives some indication of the hatred that the governing gang in Washington and their lackeys in Miami had for him.

That he not only survived all these attempts but went on over many decades to give leadership and determination to stay with the socialist revolution was because Fidel knew what he stood for. He also knew that the enemy was ruthless and would eventually have to be fought and defeated in all areas of society.

When I think of Fidel I recall the words of his great comrade and another inspirational figure to emerge from the Cuban Revolution, Che Guevara, who stated – “If you tremble with indignation at every injustice then you are a comrade of mine.”