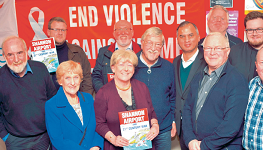 The first meeting of the Peace and Neutrality Alliance (PANA) to be held Northern Ireland took place in Belfast on 21st January.

The meeting, in the Unite offices on the Antrim Road, was called to discuss the likely impact of the election of US President Donald Trump on American foreign policy and military interventions abroad and was addressed by Murad Quereshi of the ‘Stop the War Coalition’ and Roger Cole of PANA. Part of the discussion focused on the role of Shannon Airport and the fact that over 730 US military flights landed there in 2016.

Discussions are currently being held with a view to establishing a Northern Ireland branch of PANA.