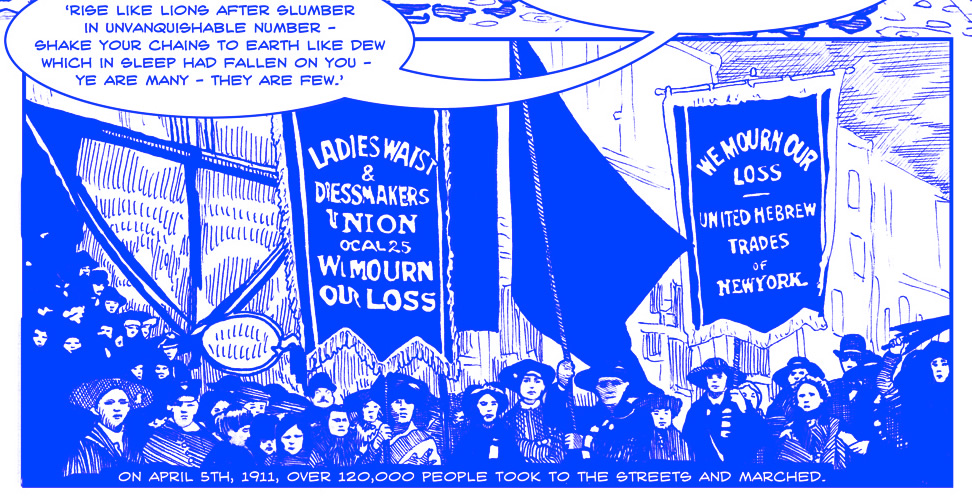 To commemorate the 193rd anniversary of the death of English Romantic poet Percy Bysshe Shelley on 8th July 1822, Kevin Squires reviews a recent graphic novel that weaves the story of Shelley’s radical poem The Masque of Anarchy with the life of Pauline Newman, a socialist organiser who was active in US labour struggles of the early 20th century.

Masks of Anarchy: The History of a Radical Poem

Billed as a history of Percy Shelley’s poem of righteous anger, The Masque of Anarchy – once described by literary biographer Richard Holmes as “the greatest poem of political protest ever written in English” – Masks of Anarchy is in fact more of a dual biography of the lives and times of two radical figures separated by almost a century.

Writer Michael Demson, a Shelley scholar, and artist Summer McClinton juxtapose the lives of the English poet Shelly with the US labour and social agitator Pauline Newman, for whom Shelley’s poetry and activism was a constant inspiration.

We are shown a life well lived, a poet who often produced verse in support of the oppressed – whether the masses in Ireland, striking trade unionists, or, in the specific case of The Masque of Anarchy, working class people protesting for democratic reform and against enforced poverty who were cut down at a mass meeting in Manchester. The Peterloo Massacre, as the event would become known, saw 14 protestors slaughtered and hundreds injured when military forces on horseback were deployed to violently break up a mass meeting of some 60,000 people in 1819.

The bloody incident would inspire Shelley to compose one of his most famous poems in response, but it would not see publication until the 1830s, a decade after the poet’s untimely death at the age of 29, at a time when it was felt its incendiary verses had lost their potency.

Nevertheless, Shelley’s canon, this poem included, remained a powerful call to the oppressed and was hugely popular with working class movements, especially the Chartists in Britain, and in the US labour movement of the early twentieth century. It is here that the book weaves in the lesser-known tale of Pauline Newman, a Lithuanian-Jewish immigrant to the US whose family fled anti-semitic pogroms in the Russian Empire, and whose story in her own words are published here perhaps for the first time.

Newman would become known as the ‘Joan of Arc’ of poor tenants fighting against rack-renting landlords in New York, and went on to become a scourge of the bosses as a result of her leading role in the International Ladies Garment Workers’ Union.

In Newman’s sections we get a real sense of the horrendous working and living conditions endured by ordinary people, especially migrants, at the turn of the century; dwelling in damp, overcrowded and unsafe slums, and employed in super-exploitative unregulated sweatshops, with even children often working 12 hour shifts, seven days a week.

It was these conditions that Newman would fight against, first as a journalist and later as a labour organiser and working class educator.

Her passion for the work of Shelley, The Masque of Anarchy in particular, would help inform and inspire her work; in it she saw disturbing parallels with the deaths of 146 women and child workers killed in the 1911 fire in the Triangle Shirtwaist Factory where she had once been employed.

The workers had been locked into a factory that was a giant firetrap and perished – sacrificed, as she saw it, to Murder, Fraud, Hypocrisy and Anarchy, the four villains of Shelley’s poem – and their deaths would become a catalyst for union organisation and hard won labour reforms.

An early twentieth century openly gay socialist, feminist, journalist, activist, trade unionist and organiser, Pauline Newman’s story is one that is deserve exposure to a wide audience, and it is a credit to Demson and McClinton that they have done so in such a unique and intriguing manner.

The same can be said for their treatment of Shelley, and just as union organising remains a vital issue, the themes of his poem continue, unfortunately, to echo down the centuries; his four villains and their minions haunt us still, even though we remain many, and they remain few.

Masks of Anarchy can be purchased directly from Verso. Several other graphic novels published by Verso are reviewed in the latest issue of LookLeft (#24).