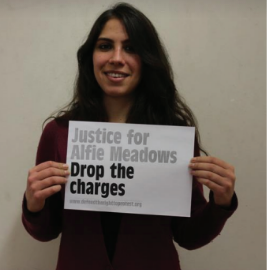 Riya Hassan is the European Coordinator of the Boycott, Divestment and Sanction National Committee (BNC), the Palestine-based nonviolent global campaign seeking to end Israel’s occupation of Palestine. A Palestinian citizen of Israel, Hassan now lives in London where she works for the BNC to “support groups and organisations in Europe in building and developing BDS campaigns.”

“The BNC,” says Hassan, is the coordinating body of the “broadest coalition of over 170 Palestinian civil society organisations that came together to issue the BDS in 2005. These groups represent the three components of the Palestinian people, so you have organisations of the refugees in exile, Palestinians under occupation in the West Bank and Gaza Strip, and Palestinian citizens of Israel.”

“The BDS campaign is rooted in a long tradition of Palestinian popular resistance against Zionist settler-colonialism, and is an approach that’s based on universal human rights and rejecting all forms of racism, including Islamophobia and anti-Semitism.”

“Essentially”, continues Hassan, “what BDS calls for is various forms of boycott against Israel until it meets its obligations under international law by doing the following three things: First, ending its occupation and colonisation of all Arab land occupied in 1967, including the Golan Heights, and dismantling the Apartheid Wall. Second, recognising the fundamental rights of the Arab Palestinian citizens of Israel to full equality. And third, perhaps the one that is fought against most viciously, is respecting, protecting and promoting the right of Palestinian refugees to return to their homes and properties as stipulated in UN Resolution 194.”

Hassan says that “the significance of the BDS movement is that it brings back all sections of the Palestinian people into the arena of struggle. It asserts that all three components of the Palestinian people and the oppression under which they all live all have to be addressed in order to achieve a just solution. Talking merely about ending the military occupation of Gaza and the West Bank does not end the oppression and the apartheid system under which Palestinian citizens of Israel live, and it does not take into account the right of refugees to return to historic Palestine.”

Hassan points out that “it’s important to note that the BDS campaign itself follows a long and rich tradition of using boycotts as a tactic in anti-colonial and anti-apartheid struggles globally. But it’s also worth remembering that boycotts have also been deployed as a tactic as part of the Palestinian struggle for rights and collective self-determination, dating back to the 1930s during the mass strike that took place at the time when Palestinians were protesting the colonisation that they could foresee happening.”

The most effective way for us to weaken Israeli apartheid, occupation and settler colonialism is by isolating it and making it a pariah state in the way that South Africa once was.

“Another important aspect of the BDS call,” she says, “is that it asserts that Israel is only able to sustain, expand and entrench its regime of oppression is due to the unique status Israel as a state enjoys internationally, and that the most effective way for us to weaken Israeli apartheid, occupation and settler colonialism is by isolating it and making it a pariah state in the way that South Africa once was.”

“Ten years after the launch of the BDS movement we can confidently say our movement is entering into the mainstream and that it has been proven to be one of the most effective forms of solidarity with the people of Palestine and our struggle for self-determination. The BDS movement now enjoys broad support internationally from trade unions, NGOs, student unions, churches, cultural figures, academics, professionals and academics associations. When it was first launched, BDS was on the fringes of the international solidarity movement, but now it is generally perceived as the most effective form of solidarity with the Palestinian people; the tools through which you can transform your solidarity into concrete actions that help us chip away at Israel’s oppression structure.”

“Not only have Israeli businessmen openly expressed their fear of the growing movement, but reports by international institutions have also shown how our movement is starting to impact the Israeli economy.”

By way of examples, Hassan points to a 2014 UN Conference on Trade and Development (UNCTAD) report shows that Foreign Direct Investment in Israeli fell by 46% that year.

“The authors of this report attribute this to two main reasons –Israel’s massacre in Gaza that summer, and the BDS movement. Furthermore, a 2015 World Bank report indicated that imports of Israeli products into the occupied West Bank fell by 29%, again mainly due to BDS campaigning. So we’re starting to see our movement – within Palestine and internationally – is having an effect on the Israeli economy. This gives us confidence, and the strength to intensify and develop and grow our campaign.”

“The movement has also made it clear to corporate criminals that they will pay the price for their complicity and maintenance of the Israeli regime or occupation, apartheid and settler colonialism.”

She highlights the example of French multinational Veolia, which ran the Jerusalem light rail, “an illegal rail system built to facilitate and expand Israeli colonial settlements in occupied Palestine” which “was forced to withdraw completely from the Israeli market after an extensive seven year BDS campaign, which cost it tenders around the world, estimated to be worth $20 million.”

Reflecting on the impact of BDS after a decade, Hassan says that we’re now at a stage “where mainstream media has regular features and discussion about BDS; politicians such as Hillary Clinton vow to fight the BDS movement if elected to the White House; Israeli academics are talking about a ‘silent boycott’ of Israeli academic institutions; Israeli representatives openly and describe and see the BDS movement as a ‘strategic threat’ to Israel’s regime of oppression. The movement has dealt real damage to ‘Brand Israel’, and we’ve managed to carve the space for discussing the nature of the Israeli state as an apartheid settler colonial state in ways that were not possible ten years ago, and this very much thanks to the BDS movement for opening the space for such discussions, and even this alone is one of the most important gains which we have achieved.”

“Although,” she admits, “we are not where we want to be in the sense of our levels of influence on the Israeli economy, these reports and statistics are an encouragement for our movement and are proof that our movement is actually working. Now we have the challenge in front of us of intensifying our campaign and making sure that in 2016 our impact is even greater. “

Hassan ended with a call for people in Ireland to get involved in the campaign, urging them “to join existing Palestine solidarity organisations that have been fighting and campaigning for years, to join their campaigns and reinforce and strengthen them.”

August 2015 – French multinational Veolia pulls out of operations in Israel. Veolia had been operating the Jerusalem Light Rail service to illegal Israeli settlements

January 2016 – Irish cement multinational Cement Roadstone Holdings divests from its Israeli subsidiary, Nesher Cement. Cement from Nesher was used in the building of the illegal separation wall, settlements and checkpoints in occupied Palestine

No, Spain is not banning private schools