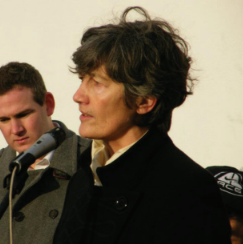 Richard O’Hara talks to the new left-wing Independent TD for Galway West, Catherine Connolly, on her priorities and hopes for the new Dáil.

Within days of arriving in the Dáil chamber, new Galway West Independent TD, Catherine Connolly, had already made an impact.

In a debate on housing she delivered a well-deserved slap down to the then acting Minister for the Environment, Community and Local Government, Alan Kelly for his arrogance, while her support of the Anti-Austerity Alliance’s Ruth Coppinger for Taoiseach also marked her out as politician willing to push the agenda of left unity.

On the Kelly incident, Connolly told LookLeft, “I couldn’t listen to Alan Kelly anymore, he has absolutely learned nothing (about the housing crisis). I mean Fianna Fail and Fine Gael on one level are giving the illusion that they had learned something, he didn’t even try to pretend he had learned something, he was telling us to put up or shut up. That was the language he was using.

“There’s still a failure to recognise that there’s a housing crisis because he didn’t build houses, besides any other extraneous factors, we simply haven’t built houses.”

A trained barrister and former clinical psychologist with the HSE, prior to being elected to the Dáil Connolly had served on Galway County Council since 1999 and as Mayor of Galway in 2005. Originally elected for the Labour Party, she broke with that organisation in 2006 and does not see herself joining another political party.

“Even as a member of the Labour Party I always valued my independence. I’m the same person that was in the Labour Party, I haven’t changed. I think an Independent role is very important,” she said.

“I think it’s a lonely role, it can be extremely difficult, but there are advantages to it. There’s no whip system and you can stand up and do your best to hold the system to account. And I’ve done that as best I could in Galway with the system and I’ll continue to do it as best I can. It is a difficult role; it would be easier to be in a party in a sense but it’s not my way.”

However, she is committed to working with others on the left towards the achievement of common goals. “I do think that we on the left have a duty to put forward a united front as best we can on basic issues,” she said. “I don’t think we can ever agree on every issue, but there are fundamental issues that we can, and I would find that frustrating that we don’t agree on that.

We on the left have a duty to put forward a united front as best we can on basic issues.

“I don’t think we should form a new party or anything like that – but there should be basic issues top of the list – housing, health, public transport we should be putting a united front on.”

To this end, Connolly has already worked with other left Independent TDs in the Dáil. “I co-signed a motion with Clare Daly, Mick Wallace, Joan Collins and Thomas Pringle. I’ve no difficulty supporting that group on the major issues. I’d like to see what the left are doing. I’d like to see the left come forward as a united front.

“We need to hammer the message home continuously. These are fundamental things that we should all be agreeing on. The right-wing parties have everything going for them – they have the numbers, they have the back-up, they have the media support – we should be supporting each other on those issues.”

On her decision to leave the Labour Party, Connolly says, “I never understood how they gave over the ground in Galway to the Green Party on the green agenda. The green agenda combined with social justice was winning for us in Galway back in 2004 and we had doubled our representation. They failed to grasp that and I think my disillusionment started there.”

Of her former party, she can be scathing. “I’m on record as saying I think they lost their soul a long time ago, at the time when they should have been leading.”

She added: “They’d be the biggest party in the country if they’d stayed out of government (following the 2011 election) but even if they had stood up to Fine Gael in government they wouldn’t have been decimated. I think the only ones that didn’t realise they were going to be decimated (in the 2016 election) were the Labour Party themselves. It was obvious at the door.”

Connolly has campaigned vigorously on issues such as the US military’s use of Shannon Airport, the Irish language and the environment, but with her background in healthcare, she places a particular emphasis on the damage done in this area.

“I was a member of the Regional Health Forum from 2006 up until I was elected (to the Dáil). Declan Bree in Sligo, was a companion of mine on that committee, we worked very effectively together. We had no power but we used it to get information and I must say it was very effective that way.

“So (we got information on) everything from Savita Halappanavar, which stands out for me, to the long waiting lists in practically every specialty, I mean it’s frightening, we would have had 30,000 people on outpatient waiting lists. Then I tabled questions in relation to how many patients were going into the private facilities, up to Northern Ireland, up to Mullingar, Dublin, all the private hospitals, Barrington’s in Limerick, so while the waiting list was building up then they would take a certain amount off the waiting list and channel them into the private system with no follow up.”

She added: “The continuous commodification really of health and the dismantling of the health service, lots of language being used like cost containment measures and bed refurbishment – that was a great one. The beds were closed for bed refurbishment. And that was back in 2006 before the crash and that was under the PDs who I think got away scot free with the dismantling of the public health service.

“For 16 years we have witnessed the running down of the public health system. They have failed to employ staff, they have used different language – and it seems public bad, private good. And actually when somebody is sick in Galway and very ill it is the public system to which that person will go.”

However, Connolly is hopeful that she and the wider left can roll-back some of the onslaught society has endured.

“Getting people homes is the best way to have a healthier society and it would be much better for the economy. I would love to see a change in the language; I would hope that we on the left would push that change in the language. I think we have in a sense, even by our presence, changed the debate – at least they’re talking about housing now.”

“Even though Alan Kelly hasn’t caught up, even Fine Gael and Fianna Fail are talking about social housing now and I think we forced that change. If we can force that change more, as well as holding the system to account, that’s how I see my role.”