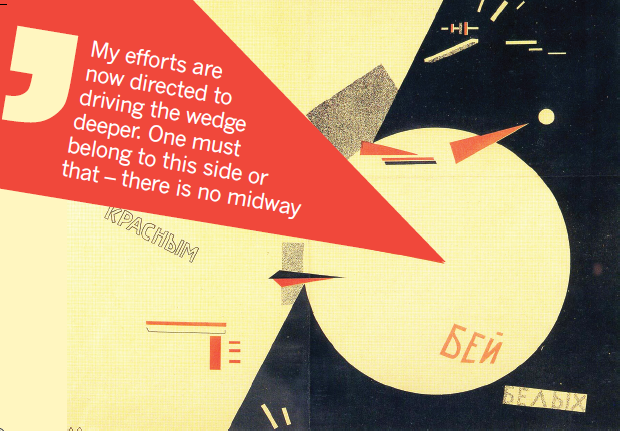 The avant-garde of the Bolsheviks was showcased in an exhibition of the work of El Lissitzky in Dublin this summer, Jane Burke reports.

E l Lissitzky, the Suprematist graphic designer and artist, emerged from the Russian avant-garde as a Jewish outsider to become a central figure in the visual culture of the State during the early Soviet era.

His propaganda poster, ‘Beat the Whites with the Red Wedge’, a major inspiration in modern graphic design, was hosted in the Irish Museum of Modern Art. The exhibition, The Artist and the State, ran from September to October, and juxtaposed Lissitzky with other political artists.

Other works featured include his children’s book series, in which red and black squares are used as part of an allegorical narrative to explain the Russian revolution and his Proun series, which was based on abstract geometric forms inspired by architectural structures. An album illustrating the State Organisation and National Economy of the USSR produced in English for the 1939 World’s Fair also features as well as posters inspired by the futuristic Russian opera, Victory Over the Sun.

Lazar Markovich Lissitzky grew up in Vitebsk, a city in what is now Belarus. In 1909, he was rejected from an art academy in Saint Petersburg as the law under the Tsarist regime allowed only a limited number of Jewish students to attend Russian universities. After the Revolution, with the repeal of anti-Semitic laws such as the ban on Hebrew lettering, Lissitzky explored his interest in Jewish art, traveling to Mahilyow to study the architecture of old synagogues, and illustrating Yiddish children’s books.

His involvement in the Jewish cultural movement and the secular Yiddish communism of the Kultur Lige would place him in opposition to Yevsektsiyas, the Jewish sections of the Bolsheviks, who believed all ethno-nationalist minority identities had to be suppressed.

To Lissitzky, the victory of the Bolsheviks in the Russian Revolution meant the liberation of the Jews and central to his philosophy of art was “das zielbewußte Schaffen” (goal-oriented creation) – meaning the artist could change society.

He advocated “constructive art, whose mission is not, after all, to embellish life, but to organise it”, a variation on the notion, once particularly strong in architecture, that art can change, elevate and improve man. This idea was shared with the wider Russian avant-garde, especially the so-called Constructivists who aimed to put their art in the service of the Revolution. Lissitzky would break away from Jewish art and towards this new movement, collaborating closely with Kazimir Malevich, who rejected the imitation of natural shapes and focused on the creation of distinct, geometric forms.

Lissitzky’s ‘Beat the Whites with the Red Wedge’ image depicts two sides in Russia’s civil war at the time, between the communists and the “Whites”; monarchists, conservatives, liberals and others who opposed the revolution. He wrote: “In Moscow in 1918 there flashed before my eyes the short circuit that split the world in two. This single blow pushed the time we call the present like a wedge between yesterday and tomorrow. My efforts are now directed to driving the wedge deeper. One must belong to this side or that – there is no midway.”

This has been read in two ways – as a statement of unwavering support for the Soviet Union or as a pragmatic recognition of the historic choices available for the Jews.

In 1921 he took up a job as the Russian cultural ambassador to Weimar Germany, working with and influencing important figures of the Bauhaus and De Stijl movements during his stay.

In the 1930s, the political shifts of Stalin’s rise had concomitant effects on the cultural avant-garde in the USSR. ‘Constructivism’ and ‘formalism’ became pejoratives and many of Lissitzky’s erstwhile peers faced the censor’s pen, or worse.

His former mentor, Kazimir Malevich was among these, suffering official criticism, confiscation of work and barring. Lissitzky, on the other hand, accommodated himself to the shift in official attitudes, and began to describe his work as ‘socialist realism’. Unlike many of the great Soviet artists, he maintained prominence in the nation’s cultural life until his death in 1941.

The exhibition space was also shared with six other artists under the theme of ‘the artist and the state’. These included a small selection of works by artists including Irish cultural nationalists such as Alice Milligan and Maud Gonne and contemporary international politically-engaged artists such as Rossella Biscotti, Núria Güell, Sarah Pierce and Hito Steyerl.

This decision to share such a small space with a scattering of pieces by many other artists either from different periods or who don’t share Lissitzky’s politics was questionable, particularly given the jarring stylistic incongruity between the artists. Placing communists, nationalists and a mix of all kinds of artists in the same exhibition because they were all engaged in political art did not translate into any kind of visual harmony.

Lissitzky’s story is one of an outsider who became the ultimate insider, from Jewish traditionalism to the Suprematist avant-garde to propagandist supreme. Today his work features as part of a contemporary nostalgia for the future, imitated and endlessly reproduced by a left that is struggling to find a vision of the future after the apparent end of grand narratives.

To the contemporary eye, Lissitzky’s visual language is instantly recognizable as having helped shape the modern world. Simultaneously, however, it appears as truly of a bygone era, not because of his faith in the now-defunct Soviet Union, but because he is being observed by a culture that can only envision a different type of society through environmental disaster or a bleak jobless ‘postcapitalism’ and one that can thus only romanticize the eternal outsider.