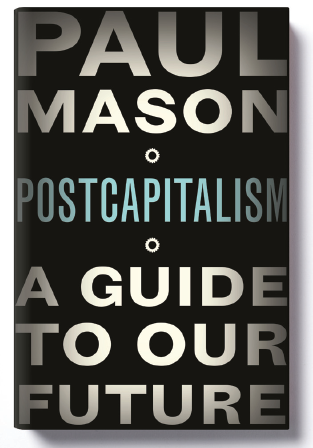 It’s hard not to like Paul Mason. A talented journalist, enthusiastically reporting from the frontlines of social crises in Greece, Turkey and beyond, he is an able analyst and explainer of politics, protest and economics.

Previous works have shown the breadth of his interests – from the history of working class organisation to the economic crisis of 2008. His latest book, ‘Post-Capitalism’, combines many of these ideas and attempts to provide an insight into the future of society, capitalism and beyond.

Mason’s argument is that new developments in technology are essentially incompatible with capitalism. Digital products, infinitely reproducible, sit uneasily with an economic system predicated on scarcity, while the steady growth of robotic production threatens to render vast swathes of the workforce unemployed. Alongside that, a new cohort of over-educated but underemployed youth grow up in a new paradigm of sharing information and digital goods. “Everything”, he says, “is pervaded by a fight between network and hierarchy.”

There are shades here of his 2011 book, ‘Why it’s Kicking Off Everywhere’, which extolled the networked radicals of the Arab Spring and European anti-austerity protests. There, Mason propounded a horizontally-organised, smartphone socialism against more traditional hierarchical organisations. But the protest movements he covered then have failed to convince by success. The vaunted Egyptian radicals, for instance, were out-manoeuvred by the better-organised Muslim Brotherhood, before they themselves were ousted by the army; hierarchy par excellence.

There is a sort of wishful thinking too, about the constant lionising of digital products such as Open Source software and Wikipedia, often imagined to be produced through horizontal, peer-topeer efforts. But this holds little relation to reality. Wikipedia is maintained by a Foundation with paid staff, and a relatively small number of editors do the running on the bulk of the content, with differences in power depending on roles. Similarly, work on Open Source software projects, the Linux operating system and the Firefox web browser, for instance, is governed by defined rules and roles and incorporates the efforts of paid contributors from major corporations as well as volunteer coders. These are inspiring and highly significant projects, but not the death-knell of formal, hierarchical organisation.

Mason’s zeal for an imagined world of peer-to-peer production means that despite his leftwing inclinations, the argument sits comfortably alongside a wider body of starry-eyed literature on ‘the New Economy’. He admits the overlap between his arguments and more conventional paeans to the immaterial economy, but asserts that the key difference is that he applies this paradigm to some very material approaching crises – a warming climate and an ageing populace chief among them. Ironically though, in grappling with such developments, the network comes up short.

With the disclaimer that the State must wither away and “the economic withering must be front and centre”, Mason proceeds to argue for its massive expansion. Pension provision, nationalisation of energy services, expanded regulation of the private sector in the interests of improving working conditions and lessening environmental impact; it is a bigger, smarter state that emerges to confront these crises, not a horizontal network.

But although the argument is not robust, it dies primarily from neglect. Instead of a focused look at transformations in the global economy, and the movements that point the way to a better future, Mason feels compelled to create a network of concepts and vignettes – about ‘the information economy’, Marx’s theory of capitalism, the history and future of working class organisation, economic policy in the Soviet Union, etc., etc., while neglecting to bulk out his argument or deal seriously with opposing views.

The very features that illuminate his journalism; exciting prose, an eye for anecdote, confound his efforts at sustained analysis and argument. We jump from Bangladeshi sweatshops to 19th-century Toronto barrel-makers, with a rest-stop in a Kirkcaldy newsagent. Enjoyable as this style may be in small doses, it does not serve the book’s ambition well. The discussion is important, but needs a little more organisation.