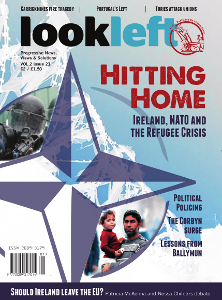 “Socialism offers a platform broad enough for all to stand upon who accept its principles.”

In their fight against democracy, the capitalist elites of Europe are taking on the appearance of King Canute – desperately scrabbling to stop the tide from coming in.

Just as the defiance of the Greek people to the destruction of their society was blocked, new resistance comes to the fore in Spain and Portugal. Meanwhile the election of Jeremy Corbyn has re-energised progressive politics in Britain, with an alliance of the institutional labour movement and a young movement of the hitherto disillusioned.

Political elites will do all they can to quell this resistance, but the waves keep coming. For the eft, it is an optimistic moment, as socialist politics are taken up and revitalised. In such a time, caution should temper hope.

Throughout history, movements have emerged to challenge elites, expressing the rage of the disadvantaged over specific depredations. But just as movements rise, they also fall, as their battles are lost or won. For those who wish to see a change in the fundamental power divisions that give rise to such grievances, we must look to such movements with two questions: how can they win now? How can they lay the foundations for greater victories later?

When we see and join in the struggles around us, we should bear in mind that they will not be the last ones. In the Republic, we now often hear a ‘Nordic-style’ society expounded as the alternative to our current woes. But movements against austerity should be aware that social compacts such as these, like all significant victories for working people, were not won in a single election cycle, but through generations of hard work from trade unionists, socialists, and activists.

Four decades of neoliberalism have sapped the strength of trade unions, propelled political parties rightwards and dissipated the hold of leftwing ideas. Reversing that trend and pushing onto the offensive means that we act with an eye not just to next year, but to the next decade. It will mean that we create organisations from which the next waves of struggle can be launched, stronger than the last, and building again in turn.

Where does unionism go now?