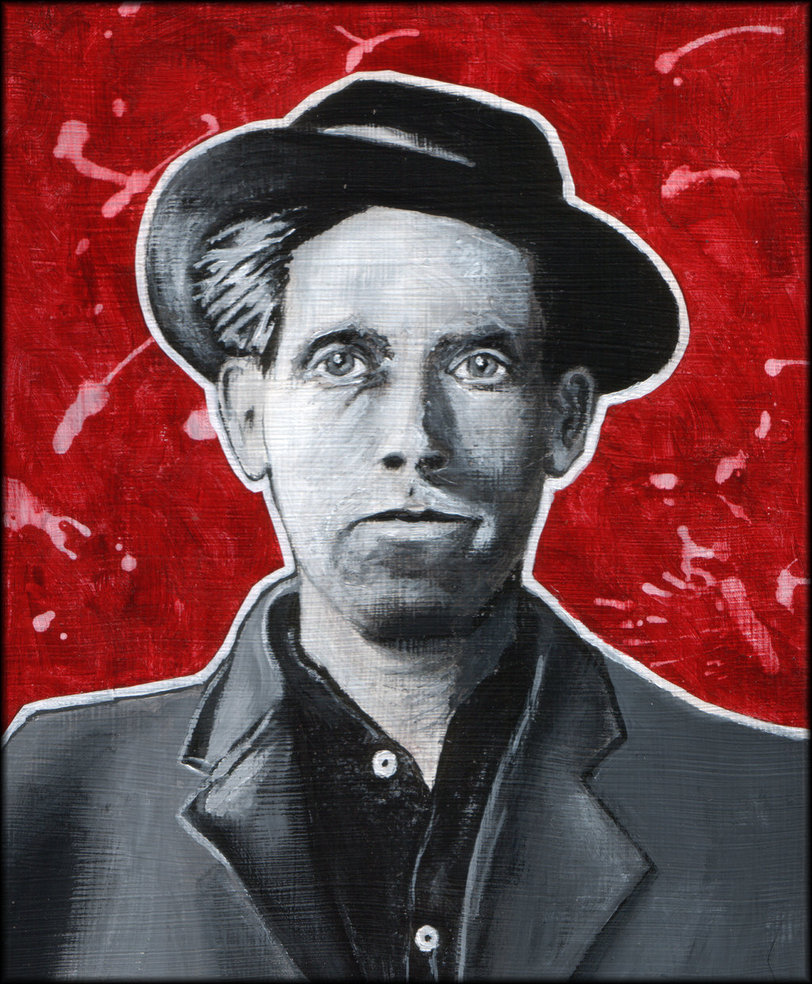 This year marks the centenary of the execution of trade union activist Joe Hill in the United States. He is perhaps better known on this side of the world as the subject of the folk ballad sung by Luke Kelly.

The ballad of Joe Hill was written by Alfred Hayes in 1936. Hayes was born in London in 1911 but emigrated to the United States with his family as a three year old and grew up in New York City. After graduating from New York’s City College he worked for a number of newspapers in the city.

In 1928 Hayes joined the Young Communist League and rose within the left wing fold as a poet of the working class with his most celebrated piece being Joe Hill.

Hayes wrote it as a poem in upstate New York at a left wing retreat called Camp Unity during the Summer of 1936. Hayes met Earl Robinson there and upon hearing Hayes recite his poem Robinson instantly put the words to music as part of a campfire session celebrating the trade union icon. By that September the song had been published in The Daily Worker and became a popular song with members of the Abraham Lincoln Brigade fighting Franco’s fascists in Spain.

Hayes joined the U.S army in 1943 and during World War II served in Italy. Upon his return in 1945 Hayes ventured west to Hollywood where he carved out a successful career as a scriptwriter.

Haye’s song had been a popular one with the folk revivalists of the 1940s and 50s but it wasn’t until Joan Baez sang it at Woodstock did the song enter the mainstream. Luke Kelly sang it on The Dubliners 1970 album Revolution thus bringing it to the fore of the ballad scene in this part of the world.

The subject of the song was born Joel Emmanuel Hagglund in Sweden in 1879. Joe left for the United States in 1902 and travelled the country extensively in search of work and that golden opportunity of the American dream, but he soon found that dream was a nightmare for many working men and women there.

Joe joined the IWW (Industrial Workers of the World) and helped organise strikes. He thought himself piano violin and guitar and roused workers with songs he wrote such as Casey Jones and The Preacher and the Slave.

Hill was incredibly active, whether it was organising strikes with dockworkers in San Pedro California, helping rebels in Baja California to overthrow the Diaz dictatorship or aiding workers with the Fraser River strike in British Columbia. His activities ensured he was blacklisted wherever he went so Joe just kept on moving around the States.

Hill made his way to Utah in 1914 and settled in Park City where he got a job at a local silver mine. He wasn’t long in Park City when he was arrested and framed for the murder of a local grocery store owner and his son. Masked robbers had broken into the store and after a brief gun battle they left the store owner and his son dead. That same night Joe turned up to a doctors clinic with a bullet wound. The doctor grew suspicious of Joe’s gunshot wound and informed the police who promptly arrested him.

Joe and his fellow countryman Otto Appelquist had rivalled for the affection of 20 year old Hilda Erickson. The two men were lodging in the Erickson house and both fell in love with Hilda but the two friends became enemies and on the night of the grocery store murder Otto shot Joe in a fight for Hilda.

The real culprit of the grocery store murders was an out of state career criminal who would later fall in with Al Capone’s gang. Even though the police had strong evidence to pin point the crime on this particular character they instead chose to frame Joe.

On November 19th 1915 Joe Hill faced a firing squad. His body was sent to Chicago where up to 30,000 people attended the funeral. Joe was cremated and his ashes divided into 600 envelopes that were sent to IWW branches across the globe.

Alfred Hayes’ song remains a regular at ballad sessions to this day thus keeping the memory of Joe Hill alive.

Alive as you and me

Him standing by my side

‘They framed you on a murder charge’

‘The copper bosses shot you Joe,

They filled you full of lead’

‘Takes more than guns to kill a man’

And standing there as big as life

And smiling with his eyes

Says Joe ‘What they forgot to kill

‘Joe Hill ain’t dead’ he says to me

Where working men are out on strike

From San Diego up to Maine

In every mine and mill

Where working men defend their rights

Its there you’ll find Joe