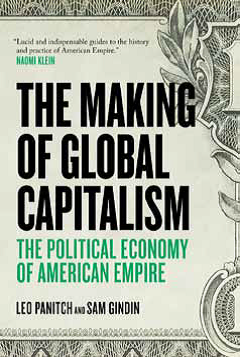 The Making of Global Capitalism lays out a thesis of the structure of modern capitalism and its institutional structures, not only recounting what happened, but explaining how and why these institutions were created. In particular, they argue that the United States is the caretaker state of a global world order.

Leo Panitch is a professor of political science at York University in Canada. Sam Gindin spent much of his life as a trade union researcher and was president of the Canadian Autoworkers Union from 1985 until his retirement in 2000. They have worked together on a number of occasions but “The Making of Global Capitalism” represents their most substantial collaboration.

The book is periodised into several stages. The first stage is the period prior to World War I in which the US is able to develop a dynamic capitalist economy and practice a classical imperialist approach within the Western Hemisphere with only occasional interference from the European powers. The second major stage, is the period between WWI and WWII.

The advent of the Great Depression, coupled with the lingering economic problems of WWI, led to deep instability in Europe, giving rise to both a widespread socialist movement and fascist reaction. In the United States however, labour unrest was dealt with through the ‘New Deal’ which established Keynesian-influenced institutions by which the State could direct the economy. After the Second World War, the crippling of Europe allowed the US to adapt its domestic approach to a global scale, through the Marshall Plan, the Bretton Woods agreement and the IMF and World Bank, with the US’s central role leading eventually to the adoption of the dollar as the world reserve currency. In parallel, the US continued to expand its military power.

Not only was the US providing a framework for a world capitalist system which did not have the same international antagonisms which lead to WWI and WWII, but it was actively attempting to firewall the expansion of communism worldwide, and especially into Southeast Asia. This lead to involvement in the Korean War, and continued with the military and financial support by the US of several dictatorships as well as the full-scale military assault of Vietnam. This period of US military expansionism as the sole imperialist force coincided with the transition to a new period brought on by the crisis of Keynesianism.

In the crisis of Keynesianism, marked by the stagflation crisis and rising worker militancy in the unions, the seeds of a new world economic approach begin to germinate. This is the neoliberal period which began to take form already in the early 1970s and largely characterises the present period of international capital.

The book ends with the international financial crisis of 2008 and the various institutional approaches taken to resolve the crisis. Despite the belief of many pundits and economists that the financial crisis would lead to big institutional changes and the recognition of the failure of neo-liberalism, it has instead produced the opposite result; strengthening the US dollar and the world financial institutions, while no challenger of any note has arisen to US military hegemony.

The authors’ view of the world capitalist system mirrors the conjectures of German Marxist Karl Kautsky before the First World War. Kautsky envisaged a system, ‘ultraimperialism’, where competing states are superseded by a powerful international institutional cartel which helps to protect capitalist interests over and above national militarist interests or the interests which are limited to native capitalists. Panitch and Gindin argue powerfully that the rise of international financial capital and the various institutions which support it, along with US military hegemony, has provided just such an arrangement.