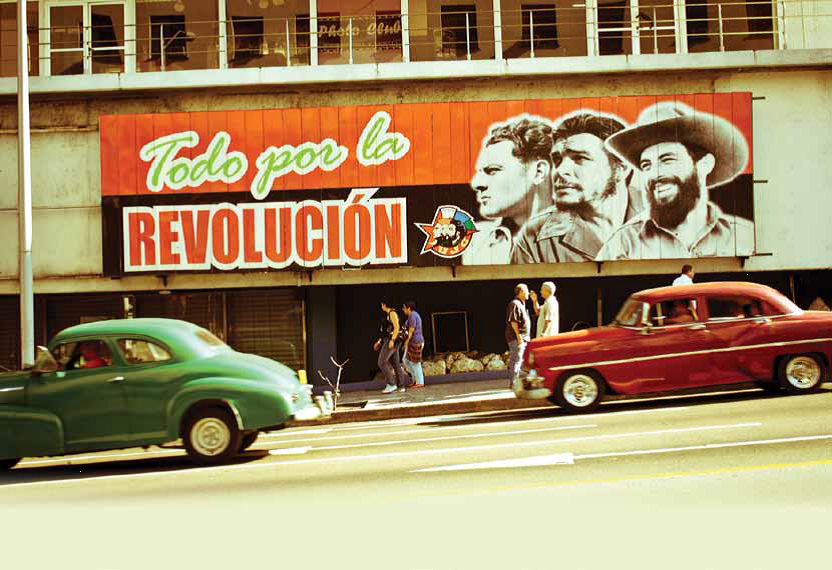 As the United States finally begins to relax its siege, Dr. Hermes Herrera Hernández, Cuban Ambassador to Ireland, talks to LookLeft about the negotiations and the future of Cuba’s economic and social model.

When the most deadly outbreak of the Ebola virus yet hit the West African countries of Liberia and Sierra Leone in 2014, it was the socialist Caribbean island of Cuba which sent the largest number of health professionals to assist the populations. Over 400 of the country’s physicians, nurses and medical technicians were at the forefront of containing the epidemic.

Cuban’s humanitarian intervention in Sierra Leone is not unique – the nation of 11 million has over 50,000 health professionals working abroad and is well known in the developing world for its longstanding commitment to providing healthcare access. As Margaret Chan, director of the World Health Organisation wrote, “Cuba is world-famous for its ability to train outstanding doctors and nurses”.

According to the Cuban Ambassador to Ireland, Dr. Hermes Herrera Hernández, this long-standing policy of ‘medical internationalism’ arises from the country’s prioritisation of human needs over private profit.

“Unfortunately, in many countries, medicine has become a market. We feel medicine is a humanitarian profession. We try to convince students of this, that they should take a salary but not to be rich and not just work in the cities, leaving the rest of the population without medical care.”

The approach to healthcare, at home and abroad, is just one aspect of Cuba’s unique economic and social model, which prioritises health, education and culture over wealth and GDP.

“We have a socialist system, taking into consideration the needs of the population and the distribution of resources, focusing on health, education, science, culture and sport and many other areas.

“We think the only way is to have a universal system of education, combined with science, culture and humanities. While many countries reduce funding to these areas as a solution to the financial crisis, we did the opposite. We aspire to have the most educated people in the world.”

Hernández is a Professor of Economics. He has previously served as the President of the University of Havana and as a Vice Minister of Culture. In his diplomatic career he has served as the Cuban Ambassador to UNESCO, the United Kingdom, the Vatican and Greece. This varied career provides him with a unique insight into Cuba and its international relations.

He points to US Secretary of State, John Kerry, who spoke of the “impressive” work of Cuban medical professionals in October 2014, as an important indication of the thaw in relations between Cuba and its northern neighbour. “It is important because they have never before recognised our medical work”, he says.

It was a small sign of a thaw in relations between the two nations, a thaw which deepened in December 2014, when a normalisation process was announced by Presidents Raul Castro and Barack Obama, beginning with an exchange of prisoners, agreements to reopen embassies and the removal of Cuba from the list of countries the US claims are ‘state sponsors of terrorism’.

Dr. Hernandez finds the latter particularly ironic, saying, “We have been a victim of terrorism for more than 50 years!” The prisoner exchange included the release of the final three members of ‘the Cuban Five’ – Cuban agents who had infiltrated right-wing exile groups that were engaging in subversive and terrorist activities against the Cuban people.

Although there is no unemployment in Cuba, the economy suffers from a lack of resources, investment and new technology. Hernandez sees the loosening of restrictions on Cuba’s international accounts and measures to allow American businesses to establish joint enterprises in Cuba as priorities. Foreign investment will not be permitted in the provision of healthcare and education services, but all other sectors, bar security, will be opened up.

Deep sea exploration is a particularly attractive prospect, as foreign companies could provide the technology to locate and exploit oil and gas resources. The collapse of the Soviet Union, combined with the US economic blockade, has meant that Cuba has been forced to make do with very limited oil supply. In the long run, the country looks to expand on experiments with solar, wind and its successful biomass industry.

In general, Hernandez says, the country is not blessed with ample natural resources, and, as seen in the ‘export’ of doctors, they see their future in a highly-educated population, and advanced industries, such as pharmaceuticals and biotechnology. At present, Cuba is a world leader in producing generic drugs for the treatment of HIV and cancer drugs.

The thaw in relations with the US will be welcomed, Hernandez feels, both among the Cuban diaspora and the American population at large.

“The majority of the population in America is in favour of changing relations with Cuba. The majority of Cuban-Americans are in favour as well. But there are some radical right-wing groups who are funded by [the US] Congress and they are afraid of losing this, so they oppose the normalisation policy.”

Hernandez believes that within Cuba those opposed to the social model that has emerged from the 1959 Revolution are in a small minority. However these anti-communists have a surfeit of foreign funding.

“Groups inside Cuba are not important in terms of numbers or support in the population,” he said, “They are small groups, supported from abroad. They have the right to run for election, but they do not have the support. What they have is money from the United States.”

Hernandez argues that the Cuban democracy, though not well known abroad, may be superior to that found in capitalist democracies.

“When there is a new candidate for a new election like Obama several years ago, the question asked on the news was – what is his capacity to raise funds for the campaign? In Cuba, every candidate has the same opportunity. We think it is better than electing people based on their capacity to raise money. ”

Cuba is dogged with accusations of censorship, but Hernandez defends the system of nationally-owned media and points to the problems of private ownership of media.

“The media in Cuba is nationalised. Critics of the regime can write to newspapers and the newspapers will publish them, but you cannot own newspapers. We are able to give space for different opinions, but we are not going to allow media to be privately owned. That is a big problem all over the world – the media can form public opinion in connection with the interests they have.”

The best sign of the model’s success is its support among the population, and perhaps most exciting for the future of the Cuban model is the growth of similarly-minded regimes across Latin America. The country is an enthusiastic participant in the ALBA organisation, which groups together Venezuela, Ecuador, Bolivia, Nicaragua and some islands. Hernandez is enthusiastic about the continent finding its own direction after decades of suffering under coups and dictatorships sponsored from Washington.

“Before they could dictate to governments, now the governments disagree. They will not change their policies, but they do have to respect South American countries more than before. The United States is losing ground in Latin America because of its undemocratic approach, but it is a long struggle, a complicated process.”