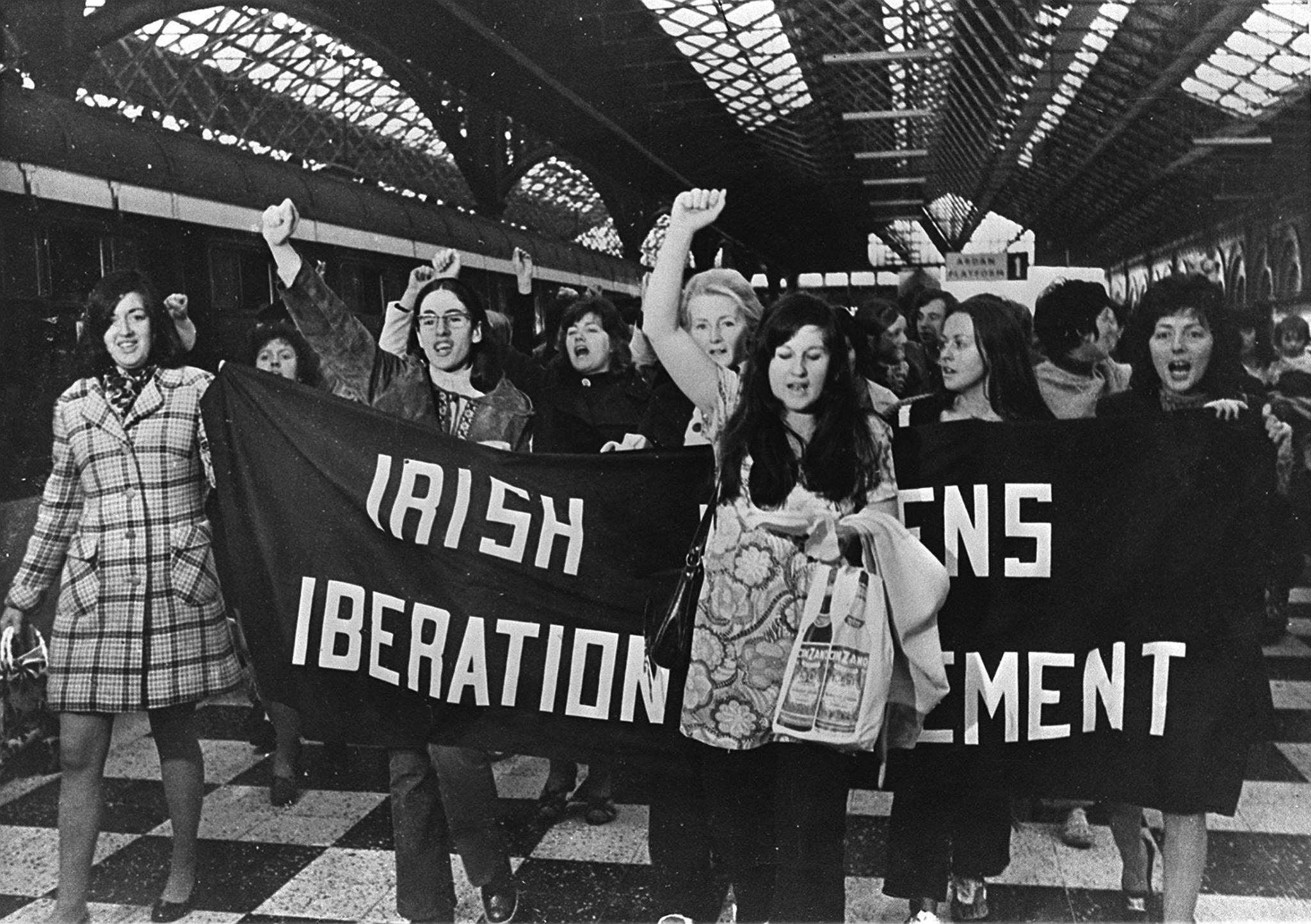 Gathering the history of the 8th Amendment into one room is no mean feat. So said feminist and LGBT activist Maura Molloy at the launch of Women to Blame, a multimedia narrative of 40 years of struggle in Ireland for contraception and abortion. According to one of its’ five organisers, Pauline Conroy, the show demonstrates “different generations of women taking opportunities to express themselves on their right to bodily autonomy and to have reproductive justice. Their actions have ranged from actions of defiance, protesting censorship, innumerable court cases across Europe, to campaigns on five referendums”.

Two phrases used in our promotional material underpin the project: one is “fragmented histories”; the other is “to prevent a public forgetfulness”.

Some years ago, film director Cathal Black, who’s short film on the Irish Women’s Liberation Movement features in the show, tried unsuccessfully to produce a documentary on second wave feminism. He met Mairin De Burca, a founder member of that campaign, who asked him: Why has no one done this before? We’ll all be dead by the time they get around to talking to us about one of the most successful political movements in modern Irish history – its legacy is still being felt today.

Anyone who has seen Women to Blame could ask the same thing: Why haven’t we done this before? Anne Speed of Irish Women United and the Contraception Action Programme of the 1970s has suggested it’s because we’re really bad at recording our own history. One thing is for sure, with all that’s been thrown at us in the last four decades, we’ve hardly had any time to write anything down!

Certainly, De Burca’s question and Speed’s answer are relevant to last year’s campaign to have the new bridge over the Liffey named after Rosie Hackett, a young woman trade unionist involved in the Lockout of 1913. Most Dubliners had never heard of Rosie or the Irish Women Workers union which she belonged to and helped to found. Those of us involved in the Bridge for Rosie campaign had difficulty verifying even the simplest facts of her comrades’ lives. The information wasn’t there, or if it was, we found it contradicted elsewhere. So a women’s union which won an extra week’s holidays for all workers might have been a victim of “public forgetfulness” had it not been for a happy accident: the 1913 Lock-out commemorations coinciding with the building of a new bridge over the Liffey but above all with the determination of four young women who would not let Rosie Hackett remain a non-entity.

This is the diffficulty with women’s history: it can be the great unknown until a short reference or a random conversation sets you digging deeper than before. The IWWU, the IWLM, Irish Women United, the Contraception Action Programme, the Anti-Ammendment Campaign, The Women’s Information Network – they tend to be footnotes in the history books rather than their subject.

The story of the struggle for contraception and abortion is fragmented and scattered. Women to Blame is an act of retrieval,  not just reclaiming bags of hidden memorabilia, but reclaiming that history. This is our contribution to bringing that history in from the margins, making it whole, making it mainstream.

Una Mullally wrote in the Irish  Times recently that you don’t get anywhere by being nice. And most of the campaigns previously mentioned were built on acts of civil disobedience. Without Rosie and her sisters women wouldn’t have the vote; likewise without the courage of the Contraception Train and the Contraception Action Programme of the 1970s with its caravan dispensary in Ballymun, we wouldn’t have legalised contraception; without the bravery of the Women’s Information Network helpline, women and girls in the 1970s might not have got the abortion advice they needed. There’s a lot to be said for not being nice.

We wanted a visual narrative with images of the time that could speak for themselves. So our words are few. We wanted this exhibition to travel so the story could be told outside of Dublin. We wanted to bring the various campaigns together and piece all the elements of the struggle under one roof. The scale of that particular task was huge. In the end we managed a small sample. But that has been digitised and forms the basis for the bigger archive project we had in mind. For those unhappy that we didn’t get around to your material, we can  only say you’ll feature in the next chapter.

A year or two ago as a Pride parade rolled by in all its rainbow glory, a fellow activist said: we could never have a parade like that for abortion. It just isn’t a jolly subject. Of course she was right. Abortion can often be a difficult choice but for those women lucky enough to live in countries that recognise their rights and consequently provide them with the medical resources they require, it can still be a positive option. For Irish women and girls, still battling for their rights, deprived of those resources the need to travel abroad invariably creates difficulty. For those without resources, it causes deep hardship.

But there has been a shift in how activists are approaching the issue of abortion. Just look at Speaking of IMELDA which demonstrates so well how the fight for reproductive justice can involve humour can make you laugh while also carrying our argument into arenas where serious debate might fail. Look at the Abortion Rights Campaign which has so successfully linked art and activism. While we would never claim that Women to Blame is “jolly” it does reflect that change, not least in its shift from black and white to technicolour!

Finally, Women to Blame might give younger activists the impression that the Anti-Amendment Campaign with all its associate groupings was a pretty impressive force. And the question might be asked: how could you have let the 8th Amendment in?

In reality, we were in the minority, facing the might of the Catholic Church, Fianna Fáil, other political parties and a public largely in their sway. We lost but in the process we created a rich history from which lessons can and have been learned.

Sometimes we forget the deep and lasting political alliances and friendships that were forged –  and sometimes lost – during those battles.  We forget the laughter, the comradeship and the small victories down through the years. Women to Blame is a reminder of all that

But before we drown in a sea of nostalgia, the words of one 1970s feminist will set us right. Marie McMahon warns: “It’s said that Ireland is one of the safest places to give birth. But is it? Anyone reading the story of Savita Halappanavar and Dhara Kivlehan and on the plight of Ms Y must, at the very least, question the safety of our medical system. We used to focus on the State as a danger – but now our health system also poses a danger to the lives and health of pregnant women and girls. Women to Blame shows that over a long period we’ve made some progress but we still have a long way to go.”

It features visuals by kind permision of the Irish Times, the work of photographers Clodagh Boyd, Rose Comiskey, Paula Geraghty, Emma Loughran and Derek Speirs. Film director Cathal Black has provided interviews with leading lights in the women’s movement as has filmmaker Ruth Jacob. Reproductions of leaflets, posters, cartoons, magazines, news cuttings give an overview of a major struggle in modern Irish history.

It is supported by the Irish Times; the National Women’s Council of Ireland; Catholics for Choice (US); the British Pregnancy Advice Service; Mandate; Unite the Union; the European Women’s Lobby; the Abortion Rights Campaign; Irish Family Planning Association; SafeIreland; Union of Students in Ireland; Action for Choice; the Rape Crisis Network