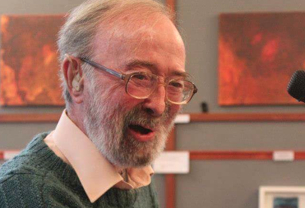 Founding member of the Northern Ireland Civil Rights Association and the Workers’ Party, Des O’Hagan, tells Justin O’Hagan about the Soviet Union, not getting into the USA and the importance of giving younger activists the lead.

Des O’Hagan’s six decades of political activism has seen him imprisoned, shot at, travel the globe and study at the prestigious London School of Economics. Throughout this lifetime in politics, the former director of education and leading member of the Workers’ Party has been driven by a commitment forged as a youth among the small red brick back to back houses of the Lower Falls Road in Belfast.

“My grandfather, Michael McKeown, was head of the dockers’ union. He was involved in the 1907 strike led by Jim Larkin opposing the blacklegs. My mother was very political. She was a devout Catholic but she hated Franco with a vengeance and was a strong supporter of the Spanish Republic. Her family had lived next door to James Connolly on the Falls Road. And her father was a friend of Connolly.”

Born in 1934, O’Hagan joined the Republican Boy Scouts organisation, Na Fianna Éireann, when he was 13. When he was 15 he joined the IRA, claiming he was older due to the minimum age of membership being 16.

His Republican activities saw him imprisoned in Crumlin Road jail from 1956 to 1960 for “attempting to remove a prisoner from her Majesty’s custody out of the City Hospital.”

During his time in prison O’Hagan developed his keen interest in society and working class politics. On his release he enrolled in the London School of Economics. Graduating in 1964, he returned to Belfast and a job as a Senior Lecturer in Sociology in Stranmillis College.

As the Republican Movement moved towards greater political involvement, O’Hagan became active again. He was among the founding members of the Northern Ireland Civil Rights Association (NICRA) in 1967, with the likes of Edwina and Jimmy Stewart, Bobby McKnight and Liam McMillen. He believes the Republican Movement’s involvement in leftwing politics was borne from its leadership’s own experiences rather than other influences.

“The politics were always there with Cathal [Goulding] and Tomás [MacGiolla] and Seán [Garland]. They were intent on developing socialist politics. People talk about the influence of the Communists and people like (Roy) Johnston and (Desmond) Greaves from outside. The idea being that the Party would not have evolved without those people. That’s rubbish, absolute rubbish.”

Along with members of the Communist Party such as Betty Sinclair and leading Republicans including Liam McMillen and Malachy McGurran, O’Hagan played a central role in organising NICRA’s campaign of major demonstrations demanding an end to discrimination in housing and politics in Northern Ireland. According to O’Hagan, by 1969 NICRA had been built into “a serious political machine.”

His activities had brought him to the attention of the authorities and O’Hagan was one of those arrested and interned without trial in August 1971. His articles documenting life in the Long Kesh internment camp were smuggled out and serialised by the Irish Times as Letters from Long Kesh. These letters played a significant role in exposing the torture and ill-treatment of prisoners at the camp and drawing international attention to them.

On his release from internment O’Hagan played a critical role in the political development of Sinn Féin (Official). He was appointed the organisation’s Director of Education in 1972. In this role he oversaw the movement’s ‘college’ which was based in a group of renovated cottages outside the village of Mornington in County Louth. During this period he also began to travel to the Communist states.

“I was very happy in the Soviet Union. I met an awful lot of wonderful people – students, lecturers at the University of Moscow”. He dismiss the characterisation of the USSR as a ‘police state” saying he traveled freely during his visits there and to other communist countries.

“There was always a constant newspaper barrage condemning the Soviet Union but I found them wonderful people.” However he warns that one of the key lessons he took from the fall of the USSR was the impact of “corruption.”
“I remember in Red Square there was a Party shop and we went into it. It wasn’t that great. But the people who couldn’t go into it thought ‘here, what’s this?’, and I remember a guy walking past and spitting on the ground as we were about to go in and I looked at him in amazement.”

O’Hagan has less experience of the USA. After being requested to travel to the States to address Official Republican supporters there, he recalls, “I went down to the US consulate in Belfast to get the visa. The man at the desk said to me, ‘No matter how long you live, no matter what changes take place in the United States, you will never get entry into America. You’re a communist,’ I’m banned out of America. I consider that to be a great compliment.”

The veteran activist remembers the 1970s as a period when “there was a very confident attitude” in the international socialist movement. At home however the split within the Republican Movement had bred great distrust.

“We knew that we were vastly different from the Provos, and hostile to them. They were engaged in a campaign of sectarian murder as far as we were concerned. There was no doubt in our ranks that the Provos were the enemy of socialism, the enemy of civil rights and development.”

From the 1970s onwards Des wrote a number of influential pamphlets and articles on the concept of republicanism, and how its revolutionary principles had developed since the French Revolution. In these works he drew a clear connection between the ideals of the French Revolutionaries and United Irishmen and the later development of socialism. He defined the essential values of republicanism as “democratic, secular, socialist and internationalist.”

The Official Republican agenda seemed to be proved correct by the rise of the Workers’ Party in the Republic during the 1980s. By 1989 the party had seven TDs and Proinsias de Ross elected as an MEP for Dublin with over 70,000 first preference votes.

However, by 1992 six of the party’s TDs, including De Rossa, had left. O’Hagan remembers this period as a “tragic betrayal. I think what it was, we became overly dependent upon the Dáil and these new TDs, they were going to lead the way forward. We should have sat on them. The damage of splits is just incredible. It rips the soul out of things. I saw that, felt it so deeply.”

At the time, In The Future is Socialism, O’Hagan wrote that those who were now declaring “Socialism is dead” were making “great play” of “expanding democracy, alternative economic agendas, women’s issues, green issues etc. Certainly all critical matters but in fact they have been used to displace the fundamental questions – who shall control the state and critical institutions.”

Despite the setbacks O’Hagan still believes there is a future for the anti-sectarian, socialist “ideals of republicanism” among all sections of the Irish working class.

“There are people who call to my house who are from staunch loyalist working class backgrounds, who are active. I knew (former Progressive Unionist Party leader) Davy Ervine very well. A good fellow, Davy.”

He adds, “Davy was hard left. They identified with us and that wasn’t easy to do.”

However, O’Hagan is concerned with a new growth of sectarian sentiment among young people in Northern Ireland. “The flag waving, the deeper division in the community. It all depends on who’s doing the leading. If Davy had been alive [the PUP] wouldn’t have been involved in that nonsense.”

“People need to become aware of what’s actually taking place in society. That they see there are evil people who are intent upon destroying the fabric of society. We’ve got to develop consciousness. We’ve got to have people saying, ‘I’m not going down that road. That’s the road to doomsday’. That’s a major battle.”

However, he sees the growing number of young people becoming involved in the Workers’ Party in Northern Ireland as one source of hope.

“The young people must be allowed to lead and not be in any way held back by any old shibboleths or nonsense. Young people, if given their heads and given encouragement, and told, ‘go ahead, get in there, fight hard’ then they’ll do that. It should be young people leading the battle.”

Despite the fall of the USSR and the political setbacks he has seen in that battle, O’Hagan still stands for a socialist society. “I think there’s no reason for the abandonment of the belief. What’s the alternative? Socialism or capitalism? Neo-conservatism? So what are the choices?”