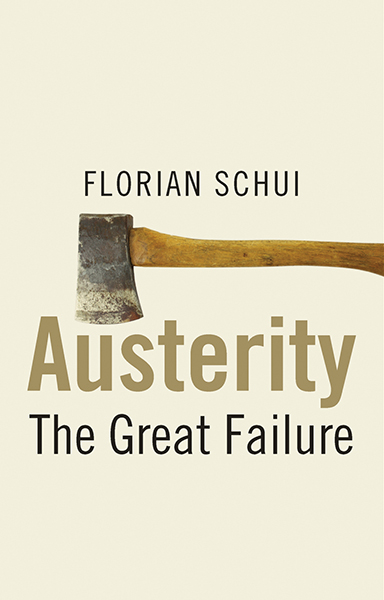 One of the few sections of the economy that has seen growth over the last five years has been the industry in books on ‘Austerity’. Florian Schui’s Austerity: The Great Failure is a welcome but curious addition to the literature.

Austerity considers the role of austerity or ‘abstinence’ in the history of economic thought. In less than 200 pages he covers “the last 2,500 years of debate on abstinence”, a startlingly broad period.

The book’s basic argument is very simple: Consumption is good, abstinence is bad. He argues that enabling people to consume more improves their living standards and this is a good thing. While this pro-consumption argument is a refreshing tonic to the sanctimonious anti-consumerism and hopelessness of much of the contemporary Left, the wide historical range of the argument poses the curious contradiction at the heart of Schui’s book; he looks at economic history through an ahistorical lens.

When looking at pre-capitalist civilisation, is it meaningful to reject abstinence for the sake of consumption? As Schui freely admits, the most striking aspect of these societies is their “remarkable stability”. For most people lving before capitalism, their consumption was more or less equal to their productive capacity. People saved little and consumed up to the limit of what they could produce. It was only with the emergence of capitalism that humanity’s productive capacities and thereby our potential for increased consumption enters a phase of rapid growth, giving the choice of consumption or abstinence a real economic meaning.

For Schui, given this option, the choice is clear: consume! He presents the argument for abstaining from consumption as being essentially “about moral judgements”. But most economists who think we should save more don not think this for moral reasons. Rather, they argue that growth depends on investment and investment depends on savings. Whilst Schui does address this issue in his discussion of Keynes, the book contains very little discussion of investment or investors.

Instead, Schui focuses on debunking the positive outcomes attributed to abstinence and increased saving. He correctly argues that increased savings cannot be a route out of a recession but increased consumption can. But he appears to draw a less believable general lesson from this; that high savings rates are always bad and higher consumption is always good. Indeed in his discussion of  the  transition from feudalism to capitalism he seems to argue that increased consumption of luxuries (rather than changing property relations) explains the rise of capitalism!

His focus on the positive aspect of consumption is perhaps most curious in his discussion of environmentalism. He neatly argues that the road to a sustainable economy will be created through technological innovation and not through the “ostentatious abstinence” that we see among some elements of the middle and upper classes in Western societies. But he fails to explain where the incentives for this kind of technological innovation will come from. Schui also proposes a series of moves to an “ethical austerity” without appreciating the obstacles the their realisation. These moves include reorienting the aim of social production from endless economic growth towards less work, more security, less inequality, more democracy and civil liberties and greater investment in green technology. His proposals are a much better set of guide posts for a reinvigorated Left than much of what is presented by many of today’s radicals. But due to the ahistorical and essentially ethical nature of his argument, he fails to appreciate that these reforms are not minor alterations but describe a road towards a different type of society.

The book is a highly informativve, exceptionally well-written and enjoyable read. Schui’s enthusiasm and hope is contagious, but in flipping the pessimism of the “austerians” he goes too far and fails to appreciate the uniqueness of capitalism, how it is structured around the interests of investors and how difficult it is to change.