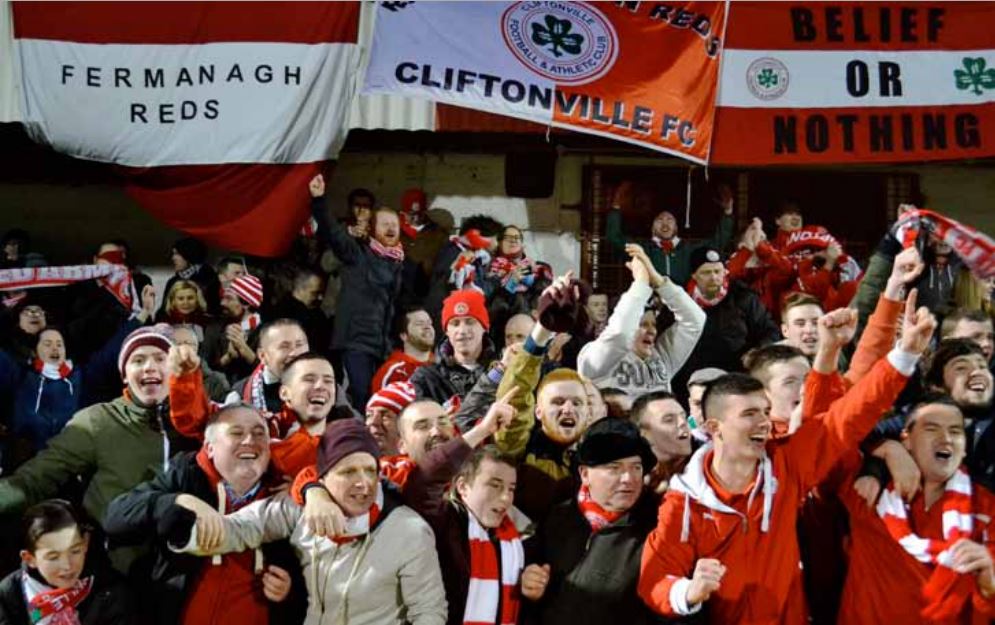 Chris Bailie and Paddy Wilson take a look at how the fans of Cliftonville football Club in North Belfast have attempted to tackle sectarianism in Irish League football and make space for a radical, inclusive style of support.

The 13th April 2013 was a red letter day for Cliftonville. That day provided them the opportunity to seize the fourth title in their history. With a match at their home ground, Solitude, against Linfield, the team that has dominated Irish Football Association (IFA) competitions for generations, they seized the opportunity in style with a 3-2 victory.

The journey that the Red Army had been on with the team up to that point is one that is very closely tied to the area in North Belfast in which Cliftonville FC is situated. According to Brian Smyth, a long time supporter of the club; “Cliftonville before the Troubles was an amateur, middle-class Protestant side with a relatively small support.”

This was representative of the local population prior to the 1970s, one that had more of an affluent, unionist character. However, the onset of sectarian violence quickly changed the demographics of the area, creating a largely nationalist population.

As a result, with Solitude now on their doorstep, the club began to attract a more nationalist crowd. Paul Kerr, who started attending matches in 1979, recounts his experience of the time; “The modern day Cliftonville FC is a product of the Troubles, particularly its supporters. The Red Army, born circa 1977 would not exist if it were not for the demise of Belfast Celtic, (a West Belfast based club which folded in the 1940s), itself a victim of a sectarian society.”

The development of a support base from mostly Nationalist areas of Belfast came with a burst of success towards the end of the 1970s, including securing the Irish Cup in 1979. Along with the success, it also served a social purpose during the violence of the 70s, 80s and 90s. As Kerr sees it, “success in the late 1970s allowed working class Catholics to manifest themselves on the football terraces.”

Supporters have taken it upon themselves to attempt to make the terraces more welcome for everyone, regardless of religious background, race or sexual orientation.

However, with the increased support from nationalists, came the almost inevitable sectarian backlash. Experiences shared by many older fans include having death threats issued by Loyalist paramilitaries against Redsmen attending the supposedly ‘safe and neutral’ ground at Windsor Park. These threats had substance, as a hand grenade attack by the UDA in 1991 made clear. Sectarianism was also evident among the Cliftonville fans themselves, and as with the other Irish League teams, there is still a problem with abuse and bigotry at match days. Kerr recalls a particularly heated match in the 2013/2014 season:

“The experience of sectarian hatred is not as common nor as heated as it was during the Troubles, but as long as it exists in society then it will find a voice inside the football ground. I walked out of Windsor Park mid-way through the second half last season. If you want to see an example of our divided community, go to a Cliftonville/Linfield game at Windsor Park.”

Smyth agrees, but is critical of governmental and IFA approaches to solve the issue: “Whenever it is highlighted now, you often get politicians from whatever sectarian camp jumping on board and condemning the other lot. Whilst forgetting that they are very much part of the problem and their responses are often self-serving and they offer no solutions, just sectarian soundbites. It infuriates me.”

The club and its supporters have taken it upon themselves to attempt to make the terraces more welcoming for everyone, regardless of religious background, race or sexual orientation. Kerr notes the very active youth scheme takes children as young as ten and uses sport as an avenue to break down sectarian divisions.

But it’s the fans who have led the charge in this respect. Paul Kerr notes: “One thing I see happening at games are hard-core Redsmen standing up to the once-a-year hang-ons who think Irish League football has not moved on from the Troubles.” This mostly takes the form of sectarian chanting and singing drowned out by purely Cliftonville songs.

Smyth was also involved in making the club open and welcome to LGBTQ fans by making a rainbow flag emblazoned with the club crest. It is frequently on display both home and away

“The Pride Flag, yes it probably got a few people wondering, but as I’ve said earlier this club is open to everyone and it’s about reaching out to a community that has taken a battering from certain politicians and religious groups.”

It’s through actions like this, where fans take it upon themselves to tackle hatred and sectarianism wherever they see it, that they lead by example as Northern Irish society as a whole tries to come to terms with its divisions.