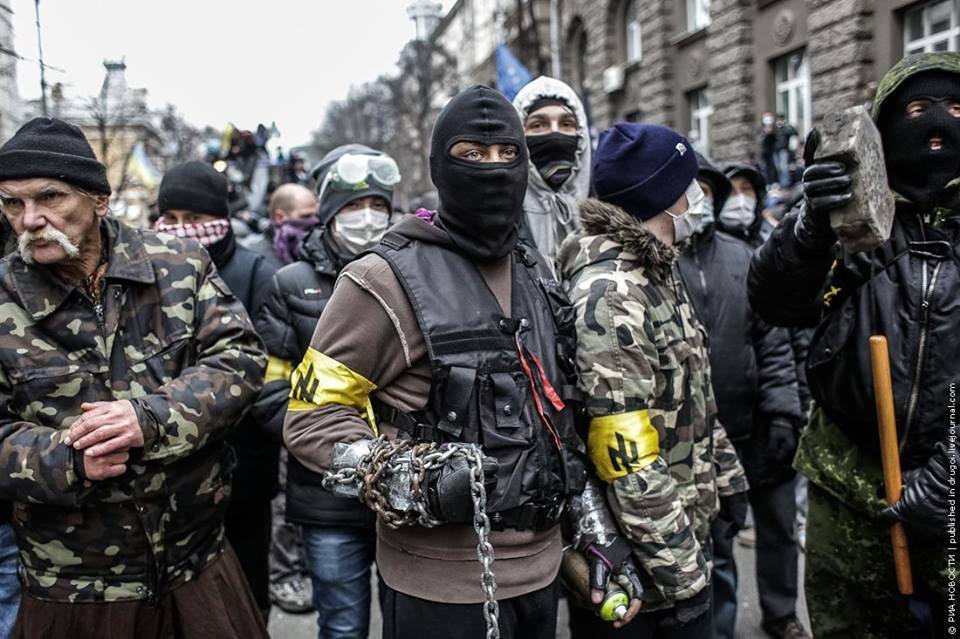 In early 2014 the Ukrainian government was overthrown by a pro-EU protest movement that centred around an encampment and violent street protests in the Maidan Square, the main focal point of the country’s capital city, Kiev. Gavin Mendel-Gleason interviewed Dmytriy Kovalevich, an activist in the leftist organisation Borotba, about the civil conflict which followed and the political position in Ukraine now.

What is Borotba and how did it come about?

Borotba (“Struggle”) is a radical Marxist association, organised in 2011 in Kiev. Members came from various left groups including a split from the Communist Party of Ukraine (CPU), particularly its youth organisation, and individual left activists from Trotskyite, Maoist, anarcho-communist and trade union backgrounds. The main stated principles of the association are anti-cap- italism, anti-fascism, internationalism, political radicalism and the struggle for gender equality.

What do you think of the so-called ‘Euromaidan’ protests which led to the overthrow of the Ukrainian government in February 2014?

We initially warned about the threat of the sharp rise of radical nationalism and fascism in Ukraine, since we had witnessed the promotion of such far-right groups by certain capitalist forces. We consider the new authorities, which came to power last year, as a coalition of far-right groups and neoliberals. The aim of the far-right is the suppression of mass popular political opposition, Left and communist movements, while the aim of the neoliberals is to impose austerity measures, plunder Ukraine through new schemes of privatisation and open the country for the further expansion of NATO.

As soon as the former president delayed the signing of a free-trade agreement with the EU, which was accompanied with IMF loans, demands for privatisation and social cuts – the next day Euromaidan was launched by a number of far-right groups, particularly those who consider themselves the descendants of Nazi collaborator movements, western-funded NGOs, as well as some members of the middle-class and small entrepreneurs. It was immediately supported by the US embassy, mainstream media and a number of leading oligarchs who switched their loyalty from the existing government. The commandant of Euromaidan was the notorious far-right politician Andriy Parubiy, the founder of the neo-Nazi Social-Nationalist Party. Paramilitary well-trained far-right militants became a kind of storm-troopers, who managed to bring a new clique to power, while the media and NGOs provided support. For sure, due to a series of violent provocations and mainstream media promotion, Euromaidan managed to mobilise some layers of society, since there was already mass indignation over widespread corruption. The leaders of the movement exploited abstract rhetoric about ‘western values’ and future possibilities of having salaries and services like in Germany or, at least, the prospect of visa-free travel to the EU.

Do you think there was US involvement?

For sure, we have seen the outright support of EuroMaidan by high-ranking US officials, who visited the protest and promised its leaders all necessary aid. There were a number of meetings between NATO, US and EU officials and the Euromaidan leaders. There was a direct help by such NGOs as the US National Endowment for Democracy. Now we see the result with a US state department worker appointed as the Ukrainian Finance Minister. The US also provides military aid and loans to the government, which wages a war against its own citizens.

Do you think Russia is involved in sponsoring the insurgency in the Donbass (south-east of Ukraine) region?

Yes, Russia has its own policy. It provides aid to insurgents; though it is using it as a kind of leverage, giving it to those militia units which are more obedient to Russia’s agenda. The Russian authorities also fear the uncontrolled rise of the rebels; especially those with a strong anti-capitalist agenda. In general, Russia’s limited aid is seemingly designed as follows: neither let the new regime’s forces totally crush the armed opposition, nor let the rebels signifi- cantly advance. Most of the weaponry used in the conflict is of Ukrainian origin, since the rebels managed to seize arsenals stationed in the Donbass and some military units turned to their side. Although, some sophisticated weaponry might be of Russian origin.

What are the key reasons that violence erupted?

Ukraine is a rather peaceful nation, which managed to evade conflict since the end of World War Two. So, it was not an easy task to provoke the violence and set Ukrainians against each other. Still the majority of Ukrainians consider the conflict as a kind of absurdity. Each time when the conflict tended to fade away a sudden incident happened, with still un- identified culprits, which escalated the conflict again. This concerns shootings in the Maidan Square – when people on both sides were killed simultaneously, igniting the conflict. Then an attack by Maidan supporters on Anti-Maidan supporters and the massacre in the town of Korsun, where Anti-Maidan supporters from Crimea were stopped and lynched. The next wave of violence was provoked by the attacks of far-right nationalists on Lenin monuments in many cities in the east and south of Ukraine. The last point which actually provoked the civil war, was the Odessa massacre on 2nd May, 2014, after which the opponents of the new regime decided to take up arms. And the further the civil war goes on, the more the motivation of personal abuse and desire to avenge comes to the forefront. In fact entire battalions of the rebels were created by Ukrainian army shelling, which destroyed homes and killed their relatives.

What is it that Borotba would like to see?

The post-Maidan regime has no political independence to make decisions over the future of the country; their role is mostly to exclude the majority of Ukrainians from decision-making. However, we hope that most Ukrainians realise soon that the country is being destroyed by the coalition of Nazis and neoliberals in power; that their lives are just cannon fodder for big business. Thus, we may expect that the current situation may lead to the rise of class issues as priorities for ordinary people.

What do you make of the new regime’s moves to outlaw the Communist Party of the Ukraine (CPU)?

We demand the end of attacks of CPU activists and the release of those charged with ‘terrorism’ and ‘separatism’. The point is also that the CPU and Soviet symbols are under attack for the very name ‘Communist’. Even the liberal Left is being attacked, since Nazis and nationalists don’t discern between them.

Moreover, the draft bill (outlawing the CPU) submitted to the Ukrainian parliament also implies banning communist ideology, which is identified as the theory of class struggle. Thus, the very call to workers’ struggle for their rights may be criminalised as a result.

Why is Borotba separate from the Communist Party of the Ukraine?

We were rather critical of the CPU. We saw it as a party which exploited the mass nostalgia for the Soviet Union, while co-operating with big capitalists and oligarchs. We also saw the leadership of the CPU as oriented only to elections. The flaw of this policy was clear when despite a certain level of popular support, the CPU was not able to withstand the attacks of nationalist paramilitaries andlet them throw it out of parliament. Additionally, the views of some of our members may differ from the CPU leadership, though we co-operate over many issues.

Do you see a path forward for Ukrainian socialists?

We are witnessing the economic collapse of the country. The nationalist and military hysteria cannot last too long under such circumstances. There finally should come some sobering and the anger may turn against the new authorities, the NGOs, the middle-class and their masters. Socialists and communists should dare to lead the struggle against the petty bourgeoisie not just the richest 1%. The source of suspicion for many workers towards many Left groups, especially liberal Left ones, is their focus on their own middle-class interests. We see it now in Ukraine that many on the Left prefer to occupy their positions and are scared about the prospect of the lower classes attacking the ‘native’ middle- class. However, we expect that nothing will remain the same, there will be radical changes either for worse or for the better: in other words the choice is the same: socialism or barbarism.

What can Left activists internationally do to help the situation in Ukraine?

Everybody decides for themselves how to help in this situation. There is a humanitarian crisis. There are refugees living in very poor conditions. There are Left and communist activists who are attacked or persecuted jointly by fascists and the government. There are Western governments which provide aid and loans to the Ukrainian government for the continuation of its war while cutting social spending at home. There is media misrepresentation of the situation in Ukraine, aimed at whitewashing our Nazis, the brutalism of the government – so, there is a need to break through the wall of media silence or misrepresentation. There are already a number of campaigns in Western countries – solidarity with the antifascist resistance, humanitarian aid, media campaigns, antiwar rallies. We are thankful for all such efforts and solidarity.