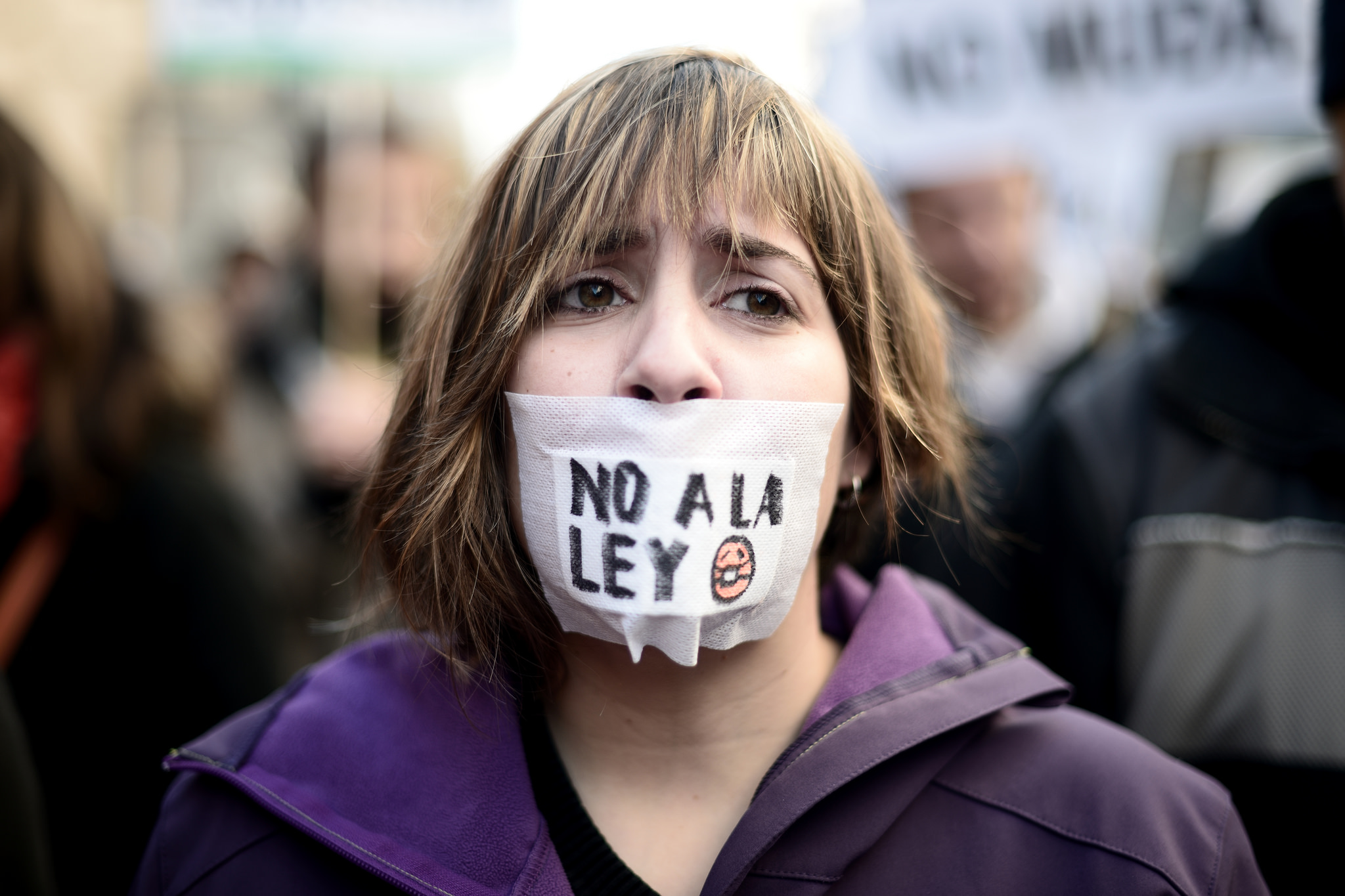 The Spanish State is attempting to dampen down protest movements that threaten the governing elite with a draconian legal crack down, reports Dara McHugh

In Spain as in Greece, years of austerity have led to significant losses in support for the centrist parties and the rise of a radical challenger. Podemos, a new party fronted by charismatic political scientist Pablo Iglesias, has drawn strength from the country’s vibrant anti-austerity movements and positions itself as a Spanish Syriza.

With a collapse in political support for both the governing centre-right People’s Party and the centre-left PSOE, Spain’s government have stridently opposed a debt writedown for Greece within the Eurogroup, demanding that Greece repay all that it ‘owes’. According to Pablo Elorduy, a journalist with the progressive newspaper Diagonal:

“If the tide is successfully turned against neoliberal orthodoxy, the ruling Partido Popular (PP) will have no justification for their antisocial policies. The Spanish Government does not want the example of Syriza to be able to precipitate the arrival of an anti-austerity party to power in Spain.”

This hostility occurs in the context of upcoming regional, municipal and national elections, with Podemos, or Podemos-aligned groups, expected to make significant gains.

The Government has also increasingly cracked down on the country’s social movements, which blossomed since the 15-M movement of 2011. A repressive censorship law, the ‘Ley Mordaza’ or ‘Gag Law’, will criminalise many forms of protest and impose draconian fines on offenders.

The label of ‘terrorists’ is being applied to social movements, especially anarchist or nationalist, with very harsh sentences for crimes related to mobilisation

This is an extension of what activists call ‘bureau-repression’, laws used to repress the movements, where stringent fines are imposed for activism and organisations can only appeal in court by payment of larger sums. As Ter Garcia of Diagonal comments, “this has meant a debilitating attack on the finances of those participating in meetings and demonstrations.”

Similarly, the criminalisation of social movements is deepening. The Spanish Supreme Court recently upheld two-year sentences against activists who threw pies at a politician in 2011. A man who raised his arms in support received a one-year sentence. Trade unionists and anti- eviction activists are increasingly facing criminal prosecution with the threat of jail sentences.

Penal reforms expanding the label of ‘terrorism’ are under way. Ter Garcia explains: “The label of ‘terrorists’ is being applied to social movements, especially anarchist or nationalist, with very harsh sentences for crimes related to mobilisation such as public disorder or damage to ATMs. This is a common scenario in the Basque Country, but now it is occurring in the entire state.”

According to UN human rights experts, the law “includes broad or ambiguous definitions that pave the way for a disproportionate or discretionary enforcement of the law by authorities.”

PSOE, the main opposition party, supports the penal reforms and is unwilling to pledge to revoke the Ley Mordaza if elected. For the Left and social movements, this is seen as further vidence of the party’s loyalty to a corrupt and unaccountable political elite, what Podemos refers to as ‘la casta’, or ‘the caste’. Corruption is the second-biggest concern of Spain’s electorate, and both the centre-left and centre-right have become embroiled in serious and ubiquitous scandals, with, according to Le Monde Diplomatique, 2,000 corruption cases under official investigation, “involving at least 500 high-ranking civil servants and an estimated annual cost to the state of €40 billion”.

Against this caste, Podemos advance ‘the people’, claiming to come from “neither from the Left nor from the Right, but from below”. The party has been criticised from the left for diluting its economic policies and the leadership seem to have their sights set on the centre-left vote. Regional elections will give Podemos its first domestic seats and present it with important strategic choices. For instance, if, as in the March elections in the southern region of Andalusia, the PSOE win the elections but come short of a majority and look, as before, to its left for a coalition partner, Podemos will be faced with the challenge of pursuing its policies while distinguishing itself from ‘la casta’ it wishes to challenge.

Nationally, this question will asked again, but even more emphatically.

No, Spain is not banning private schools