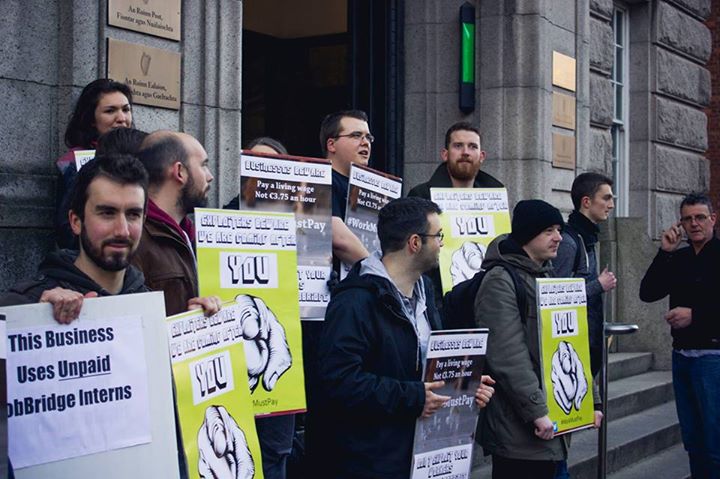 Over the past year a growing grassroots campaign for jobs justice has been winning small but significant victories in a guerrilla war against the JobBridge cheap labour scheme.

Established last year, the Work Must Pay campaign has been taking on exploit- ative employers who have been using the Jobbridge scheme to replace entry level jobs with virtually unpaid labour.

According to campaign spokesperson Laura Duggan, the group directly targets companies that use the scheme by staging pickets outside their places of businesses and informing the public about their use of JobBridge to fill positions that ordinarily would require paid labour.

“We aim to bring the message home to employers that using JobBridge is un- acceptable. It undermines real jobs, and creates a situation where a fair wage becomes something young workers can only aspire to instead of expect, while bosses profit off what are basically interns working for €3.75 an hour.”

The group is a broad left initiative made up of members of Unite Youth, the Connolly Youth Movement, Sinn Féin Republican Youth and CWU Youth and non-aligned young people.

Work Must Pay have scored a number of victories which have seen businesses in Dublin including a Japanese restaurant, a pharmacy, a popular cafe and a hardware shop remove advertised JobBridge positions after the campaign turned up to embarrass them and urge the taking on of properly paid staff instead.

Additionally, says Duggan, “numerous companies have removed positions from JobBridge after being contacted by the campaign without us even needing to turn up.”

Duggan says she is optimistic about the campaign’s growing influence, which “is spreading, with several local initiatives achieving similarly successful results around the country.”

However, the campaign believes the ultimate responsibility lies with the Irish Government who implement the scheme. “The Government must scrap this insti- tutionalisation of internships and ensure that employers pay a decent, living wage for all workers,” Duggan said at a recent demonstration outside the Department of Jobs, Enterprise and Innovation. “Young people should expect to be properly paid for their work, not treated as a source of cheap labour.”