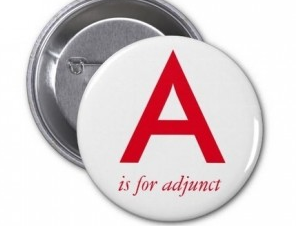 In October 2014 an adjunct professor in San Jose State University posted the following question on a social media site: ‘What would happen if adjuncts across the country all walked out on the same day?’ This Wednesday, 25th February, she will have her answer.

For the past few months a campaign largely coordinated through social media has been picking up momentum as adjunct faculty on campuses across the US have been preparing to stage walkouts and teach-ins. Their aim is to raise visibility both within and outside their institutions for the poor pay and working conditions that exist for so many academics across the third-level sector, including Ireland.

What is an adjunct and why are they walking out?

‘Adjunct’ is an American term that has only crept into Ireland in recent years – largely through the human resource departments of our leading universities. One university policy defines it as: ‘a researcher or teacher who is paid for a specific purpose in teaching or research and on a ‘fee-per-item’ basis, which may be annualized to a fixed annual salary’. What this means is part-time work, often paid by the hour and on contracts that are generally fixed from nine months to a year. The upshot is that adjuncts not only struggle with low pay but also with chronic insecurity about their future.

While adjunct work has always been part of the US university system, the proportion of work carried out on this basis has been growing consistently over the past two decades. In 2011, half of all faculty in degree-awarding institutions was part-time, up from 22% in 1970. More importantly, these part-time positions are no longer just a phase for young academics to pass through, a kind of ‘apprenticeship’ that must be served before securing something more permanent; adjunct work is no longer the exception in university departments but the norm.

At the same time, the fees paid by students to attend university in the US have risen dramatically – up 439% between 1982 and 2007 and largely paid through student debt (at $3 trillion it now exceeds credit card debt in the US). Clearly this money has not been directed towards the creation of more permanent teaching and research positions. Instead, there has been a rising proportion of university managers, expensive global campaigns to recruit students and large capital investments in state-of-the-art sports facilities, student residences and the buying up of real estate. The increasing casualization of academic work is not, then, simply due to a lack of money to finance permanent, fairly paid positions, but the way teaching and core research have been de-valued. In this sense, the plight of adjuncts is closely connected to more general transformations in higher-level education.

What has this got to do with Ireland?

While we are used to hearing about the important role our universities play in the knowledge economy, there is another, less positive story to tell. While the extent of casualization in Irish universities is not known precisely, it is clear that we have not escaped what has become an international tendency.

Understood as a place of research and learning rather than work, its not surprising that the changing working conditions within the university have received little attention. Members of a group called Third Level Workplace Watch have recently carried out exploratory research. It revealed that Irish third-level institutions routinely rely on casual work, including temporary, part-time and hourly-paid work, to carry out the core functions of the university. These workers are generally low-paid, with nearly half of the sample earning less than €10,000 a year. Nor are these workers are fresh out of PhD programs. On average they have been working in academia for over seven years.

It is optimistic to imagine that this situation is going to change with the economic recovery, not least because the shift towards casualization began some time before the crisis; reductions in public funding are only part of a wider re-organization of the sector. On one hand, third-level institutes and universities are forced to compete for external funding and investment that is indexed to measurable ‘output’, while on the other they are trying to cut costs in areas that are not considered ‘productive’. Providing permanent, fairly remunerated positions to teachers and researchers does not fit within this vision of the ‘lean’ university.

Can we organize an adjunct walkout day in Ireland?

As the organization of the national walkout day in the US has shown, there are particular challenges facing part-time academic workers who want to challenge this situation.

First, while there has been widespread support for actions on the 25th February, part-time faculty are often afraid to make their grievances visible; if they are seen to be making trouble they can easily be overlooked when more hours are made available, or a new position opens up. This kind of fear is particularly understandable when we consider that most academic departments are small and appointments are made on an informal, ad hoc basis.

Second, while traditional unions have for the most part been sympathetic to the plight of adjuncts, they have not been willing or able to represent their particular interests. This is partly because unions are organized around permanent workers rather than the realities of casual, part-time workers. But it is also because unions are tied into existing agreements that limit their capacities to support adjunct workers. In the US, for example, many of the unions have advised employees against taking part in the walkouts because of ‘no strike’ clauses in their contracts with public universities.

It is worthwhile remembering that adjunct insecurity is a reflection of broader changes within the third-level sector, and that their work remains central to the functioning of the university. While adjuncts are likely to take on more and more teaching duties in the future, the cost of university education is likely to increase. As student tuition fees are channeled elsewhere, the quality of teaching will continue to be undermined as part-time teachers may not be paid for grading, for office hours or even for devising entire courses from scratch. There is clearly a need to challenge this situation and real possibilities for adjunct teachers and students to find common cause.

There are also possibilities for adjuncts to win support from permanent academic staff. Senior academics are for the most part also experiencing the general devaluing of core research and teaching. It is encouraging then to see that many permanent staff in the US have signed up to the National Walkout Day, with one professor of law at the University of Denver writing: “Those of us who are tenured and tenure-track faculty should care in an even more immediate way, as the fate of the adjunct is intimately tied with the fate and shape of our own institutions.”

For any one interested or affected by these issues there will be an open discussion this Wednesday evening in the Teachers Club hosted by Third Level Workplace Watch to mark National Adjunct Walkout day. They will be asking the question: Can we organize an adjunct walkout day in Ireland?

This is a guest post from Third Level Workplace Watch.