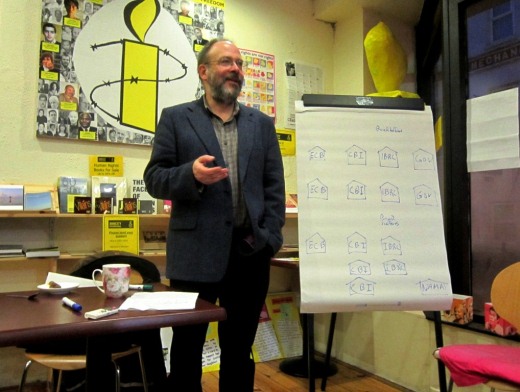 Ireland is in the midst of a depression. The latest statistics show that one in four Irish people are suffering enforced  deprivation, a percentage which has more than doubled since the onset of the crisis. Median income has fallen by almost 15%. Unemployment is still well into double digits and would be higher were it not for phenomenal levels of  emigration. GDP is almost €16 billion lower than it was before the depression started. Over the six years of the  slump, investment has fallen by 47%. The effects of depression in Europe have also been severe, though very unevenly distributed.

Globally, capitalism is still in crisis. Ireland has not turned the corner. At best it is on the upside of a long, slow, shallow curve. The depression was not triggered by an ordinary turning of the business cycle, but rather an epochal crisis of capitalism. Capitalist societies periodically suffer major crises.

Examples of such crises include the Long Depression of the late nineteenth century, the Great Depression of the 1930s, the Great Stagflation of the 1970s and, arguably, our current crisis. The causes of these crises originate in the collapse or the malfunctioning of the basic institutional structures which underlay the previous period of capitalist growth. The current crisis is a crisis of global neoliberalism. Nevertheless, contained within it are the regional crisis of Europe  and the more local national crisis in Ireland. A recovery from the crisis, if it is indeed possible, will only come about  when the institutional sources of these three nested crises are all addressed.

Global neoliberalism can be summarised as an interactive combination of globalisation, neoliberalism, financialisation, and weakened labour. At a global level, these institutions at first led to the recovery from the Great Stagflation. However, these same institutions also led to stagnant wages, excess capacity and consequent sluggish investment. Sluggish investment, along with restored profitability, fed financialisation and blew up a series of asset bubbles which initially sustained demand, but eventually triggered financial collapse.

At the European level, globalisation and neoliberalism led to a monetary union without the necessary activist fiscal union, and a Central Bank focused entirely on inflation-fighting rather than unemployment and refusing its role of lender of last resort. This outcome was determined by the declining fortunes of labour and the increasing influence of finance. The euro effectively fixed exchange rates within a diverse Eurozone, leading to trade deficits (and surpluses). Trade surpluses were recycled to blow up asset bubbles. Trade deficits especially in the South of Europe became chronic. The transnational crisis triggered a corresponding financial collapse in Europe which was transferred onto the public purse, inflating deficits and national debts. The lack of fiscal union and an activist Central Bank prevented an effective response at a European level to the emerging crisis.

In Ireland, a weakened labour movement did not lead to stagnant wages, but did contribute to rising inequality and a low tax regime justified by neoliberal ideology. Inequality contributed to rising levels of household debt, as did a  housing bubble blown up by the insertion of Ireland into an international financial regime. The collapse of the  housing bubble triggered a financial crisis, a fiscal crisis and ultimately an unemployment crisis. This was fed by household debt and the transnational crisis. Addressing the multiple dynamics which led to these nested crises is necessary to overcome the resultant stagnation.

At the global level, this would involve an increase in the power of  labour and rising wages, increased public investment, especially in a green energy transition, a larger, more activist state, and public banking. At a European level, this would involve the establishment of a transfer union and the  adoption of an employment policy by the European Central Bank – or the dismantling of the Euro. In Ireland a redistribution of income is needed along with a write down of public and private debt. Fiscal health should be  established on the basis of taxes on high income and wealth.

In the absence of such an institutional transition, Ireland will remain vulnerable to the outworking of the unresolved institutional dynamics of these global crises. Ireland will remain crippled by debt, austerity and a dysfunctional  financial sector. It will be subject to the criminal economic inactivity of the Eurozone authorities and stresses caused by the failure to resolve the Eurozone crisis. It will remain trapped in an international neoliberal crisis of falling  working class living standards, a shrinking state and out-of-control finance. The major establishment responses to  the crisis so far simply call for anintensified global neoliberalism. While this may succeed in driving down workers’ standards of living, breaking the remaining influence of unions, and further disenfranchising popular opposition, it is unlikely to succeed in restoring growth. This failure and the ongoing crisis opens the possibility of a Left response which goes beyond an opposition to austerity and proposes fundamental reforms.

The most fundamental of reforms of course would be a transition to an entirely new basis for production and distribution and the discussion of the socialist alternative should be more prominent than it has been. Nevertheless, there are institutional reforms which can both be defended as potentially effective in overcoming the crisis and  raising the possibility of a democratisation of the economy. Such a programme would revolve around seizing control of the nation’s money and finances and proactively addressing the problem of employment. This would involve repudiating a substantial portion of the national debt, the establishment of public banking, and the writing down of a great deal of private debt. Such a programme could not be cleared with the European Central Bank and would necessitate leaving the Euro. A sovereign currency could then be used to buy unused resources, the most prominent of which is unemployed labour. This could take the form of a job guarantee.

There is a great fear of leaving the Euro. Indeed this fear is currently a more effective obstacle to the serious consideration of this kind of programme than knee-jerk opposition to nationalisation, in this case of the banking  system. This underlines the effectiveness of the transition to the Euro in copper-fastening the neoliberal programme in Europe and removing substantial areas of economic policy from any semblance of popular control. Could such a programme be undertaken then at a European level?

Debt repudiation, public banking, private debt write down, and a Europe-wide job guarantee are theoretically possible. The major problem, however, with proposing such a programme at a European level is that European  institutions are unsuited to taking this kind of decision. It would not be going too far to say that European institutions are deliberately designed to be unsuited to taking this kind of decision.

An almost revolutionary democratisation of European governance structures would be necessary as a preliminary step in this achievement. In these circumstances, the proposal of far-reaching European reforms runs the risk of being discouraging and demobilising in and of itself. Where could a Left movement in Ireland intervene to demand such a programme?

A kind of compromise strategy could be imagined where the credible threat of implementing this strategy on a  national level by one or a few countries could be brought to the table in Europe. The possibility of a contagious  collapse of the Euro system would have the potential to drive a response at a European level. In fact, it is hard to imagine any other European strategy which has any possibility of success. Both an effective national response to the crisis and a potential European response depend on overcoming fear of leaving the Euro. The transition would undoubtedly be fraught with difficulties but these must be weighed against the longer term benefits of opening up the possibility of a progressive popular response to the ongoing economic crisis.