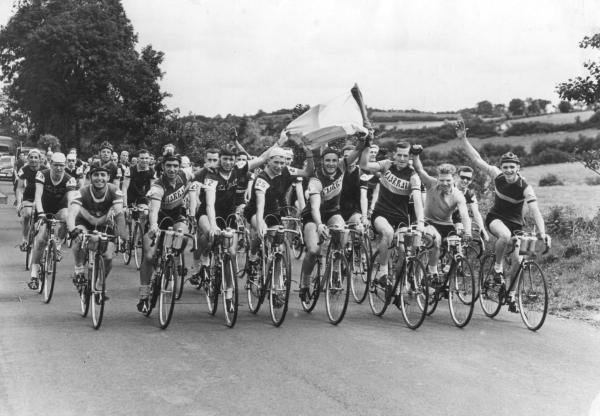 The Irish Civil War divided many facets of Irish society. Cycling was no different. The legendary Rás Tailteann staged cycle race came to encapsulate the political differences that existed between those loyal to the new 26 county state and republicans who refused to recognise it or the partition of the island.

In 1947, a concerted attempt was made internationally by the UCI (Union Cycliste Internationale – cycling’s main governing body) to force cycling associations to abide by post-war borders across Europe. The UCI demanded that the National Cycling Association (NCA) restrict its activities to the 26 counties. The NCA refused to endorse partition and consequently was expelled from the UCI. In 1949, the Cumman Rothaiochta na hÉireann (CRE was established to organise solely within the 26 counties, consequently gaining UCI and international recognition. So began a bitter dispute between the rival bodies, which would continue well into the 1970s.

The hostility between both organisations was mainly driven by the NCA’s view that CRE members were “sell-outs” and “scabs”. The NCA’s links to the GAA were strong to the point that both organisations were virtually indistinguishable frome one another up until the 1940s. Whilst the NCA was distinctly Nationalist, rural and working class, CRE mebers were mainly city dwellers and were considered “urbane”.

In the initial years of the CRE’s existence it experienced much success and became a significant threat both organisationally and financially to the NCA. Furthermore, CRE members were allowed to compete internationally, which lured many cyclists over to the organisation. However, up until 1979 many of Ireland’s best riders sacrificed almost certain successful international cycling careers out of loyalty to the NCA and its political beliefs.

A group of young and political NCA members conjured up the idea of a national race to compete with similar races the CRE had begun running (races were often being disrupted by NCA members). The event was to be named the “Rás Tailteann” invoking the spirit of the ancient Tailteann Games, which had been presented by early 20th century cultural nationalists as type of ancient Celtic Olympics.

Dubliner Joe Christle was the main organiser and driving force behind the event. Christle was a Republican with organisational and publicising skills and was a prominent figure within Sinn Féin and the IRA, as well as being active in the trade union movement.

The inaugural two-day Rás in 1953 abounded with Republican-inspired ceremonies and remembrances. The first stage set off from the GPO, where some riders laid a wreath at the statue of Cúchulainn. The following stage was preceded by a wreath lad at the monument in Wexford commemorating the pikemen of the 1798 Rebellion. Thereafter, the race was used by the NCA to promote the Republican cause across the island. As the Rás developed over the following decades, Christle thought up increasingly innovative ideas to politicise the event. During the second stage of the 1956 edition between Armagh and Newry, Christle hung the Irish tricolour  from the lead car. At this time the display of the tricolour was ilegal in Northern Ireland and the RUC forcefully stopped the race outside Cookstown to confiscate the flag. Christle recovered it but the arrival of further police forced the abandonment of the stage. However, this did not prevent Christle from leading the riders over the finish line displaying the recovered flag.

The “Cookstown incident”, as it became known, was used by Christle to great promotional gain. As the Rás gained in notoriety, bringing colour and vibrancy to a country beset with social and economic problems, the CRE became relentless in its efforts to keep the NCA internationally isolated. Christle recognised the need for international relations and competitions. He set about forging links with other disaffected organisations, many of which had left-wing and communist sympathies. One such federation was the FSGT (Federation Sportive et Gymnique du Travail), a French workers’ cycling organistion with strong links to the communist and syndicalist movement. The FSGT ran a high-profile international event called the Grand Prix de l’Humanité, which was sponsored by the French Communist Party’s daily newspaer l’Humanité. The NCA began sending riders to the race, as did the FSGT to the Rás. Each year the Rás would be dedicated to an event or historical figure strongly associated with Irish nationalism and republicanism. In 1970, at the height of the Cold War, it was decided to invite a very strong Russian team to further increase the race’s profile and dedicate the race to Lenin and Connolly. The race proved to be a massive success, with throngs of people lining out to see the talented Russian riders.

Perhaps Christle’s most famous attempts at publicising the NCA’s cause on an international staage were during the Rome World Championships of 1955 and the Melbourne and Munich Olympics in 1956 and 1972 respectively. At each event, banned NCA riders would infiltrate the race and once identified, would be ejected, causing great publicity. In Munich, riders even went to the lengths of famously hiding in some woods along the course before joining the race. This event marked the end of the Christle era with many prominent members of the NCA beginning to question if its tactics were the best way to promote the republican cause. In the 1970s, attempts weere made to begin a process of cooperation between the various federations on both sides of the border, after a number of acrimonious events. At first reciprocal teams from the CRE and NCA were sent to each other’s marquee races. In 1979 goodwill culminated in the Tripartite Committee being established, comprising of the NCA, CRE and the Northern Ireland Cycling Federation (NICF).

On Cycling Ireland’s website it states “The Tripartite Committee operated from 1979 up to 1988 (when the three organisations amalgimated) and, while it encountered a variety of difficulties during that time, it was a remarkable example of compromise and cooperation given the context of the polarisation, passion and violence of those years.” It can’t be underestimated just how courageous a step this was by certain high-profile members from these organisations. Many of these members would have had strong political beliefs themselves, but they understood the importance of co-operation for the benefit of cycling as a whole.

In some ways the Rás has paralleled Ireland’s political landscape and itt provided an example of hos to settle the past and be able to move on from Conflict.