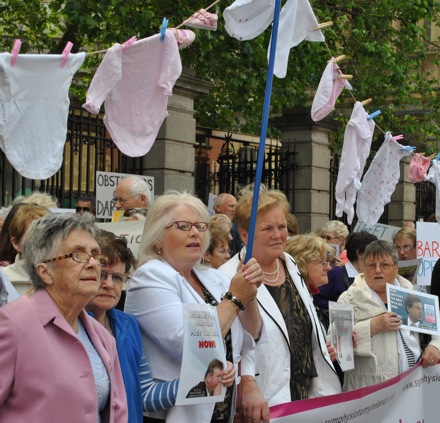 Symphysiotomy survivors have voted to reject a Government redress scheme for women who underwent the procedure in Irish hospitals.

At meetings during November, Survivors of Symphysiotomy (SOS) members voted by over 80% to reject the scheme.

SOS Chairperson Marie O’Connor told LookLeft that the scheme has “no admission of wrong-doing” and is “built on the official lie that symphysiotomy was a medically acceptable practice. It completely flouts the recommendations made by the UN Human Rights Committee (UNHRC) in a manner we are appalled by.”

She also stated the scheme involves “survivors signing away their legal and Constitutional rights as a condition of entry before they know what moneythey will be offered.” The “draconian” 20 working day timeline for applying to the scheme will exclude women with dementia, those living abroad and will penalise women who are less well off, those without records and those with psychological issues. O’Connor pointed to comparable redress schemes such as that for Hepatitis C infections, where there was a 3 year timeline for applications.

Our campaign has been focused on getting truth and justice for our members.

O’Connor said that many survivors are taking legal action to seek justice and are demanding that the State take responsibility for allowing the procedures to take place.

Symphysiotomy was a procedure promoted by Catholic doctors as an alternative to Cesarean Section (CS), even though it was much more dangerous for mothers and children.

It involved cutting the cartilage of a pregnant woman’s pubic bone to widen the birth canal. For many women it left permanent injuries such as incontinence, difficulty walking and chronic pain. It also led to a higher rate of infant morality.

Ireland was the only country in the developed world to practice this discarded surgery in the mid to late 20th century. This was due to power of Catholic obstetricians who disliked CS, on account of its association with what Archbishop McQuaid termed the ‘crime of birth-prevention’. International standard medical procedure was to advise women to seek sterilisation after three CS surgeries.

O’Connor commented that: “The State seems bent to this day on protecting the medical profession. Our campaign has been focused on getting truth and justice for our members and this has conflicted with the official plan to cover-up and fob-off. There has been no independent inquiry, as recommended by the UNHRC. All we have seen is two white-washed reports effectively adopting the position that 97% of these operations were successful.”

Government unwillingness to confront the issue or consult with survivors has forced legal action. “We are hopeful that the truth about these abusive operations will be established. It is infinitely regrettable that this is the only way this can be done. For our members this is fundamentally an issue of truth, not money.”