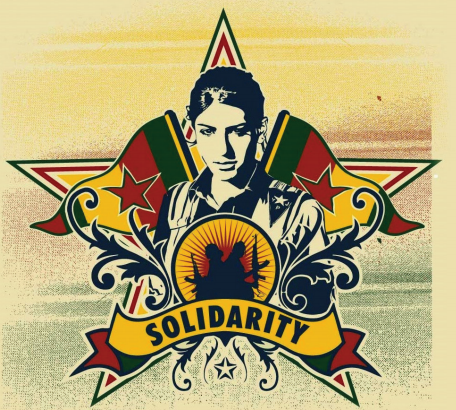 Mehmet Aksoy was born into a working-class Kurdish socialist family in Turkey and migrated to the UK at the age of four. He is a member of the Kurdish Youth Assembly in London and regularly visits Kurdistan. He talked to LookLeft about the current military and political struggle in the Kurdish areas of Syria.

The battle for Kobane in Syria has brought the Kurdish struggle to the fore. Who are the forces fighting there?

The Rojava (West Kurdistan) Revolution began in Kobane in 2011. It was led by the Democratic Union Party (PYD), which sees the head of the Kudistan Workers’ Party (PKK), Abdullah Ocalan, as its ideological leader and wants to create a democratic autonomous region in North Syria based on the ideals of a democratic nation, gender-libertarianism, ecology and communalism organised by the people for the people.

Due to the Syrian civil war, the Assad regime had to withdraw from Kobane and so the Kurds and other groups, including Armenians, Assyrians and Arabs formed their own popular administration. For almost two years this was a relatively peaceful area, with occasional skirmishes between the People’s Protection Units (YPG), the official defence force of Rojava and regime forces and also elements of the Free Syrian Army (FSA). As this administration and its ideals spread, attacks against Kobane and the other two mainly Kurdish cantons in North West Syria (Afrin, Jazirah) intensified.

Kobane and the ideological framework of the PYD represents the antidote to the venomous ideology of Islamic State.

Before the world turned its attention to Kobane and the Kurds, the people of Kobane/Rojava had been fighting against the Al-Nusra Front (a group in the FSA) for over a year. The Islamic State (IS) was a part of the Al-Nusra Front and broke off in early 2014 because Al-Nusra was too moderate for them. IS was attacking Kobane before they lay siege to Mosul in August and took the Iraqi Army’s heavy artillery in a day to become a danger for the US and the West. They returned to Kobane almost immediately and have been attacking it since 15th September.

The reason for this is that Kobane and the ideological framework of the PYD represents the antidote to the venomous ideology of IS. This is why the IS desperately wants to topple Kobane, for itself and for its paymasters; such as Turkey and, before it got out of control, NATO.

Can you give a brief outline of the history of the PKK and its leader Ocalan?

Kurdish and Turkish revolutionaries who believed that the emancipation of the Kurdish and Turkish nations would begin with a revolution in Kurdistan formed the Kurdistan Workers’ Party (PKK) in 1978. The group who formed the PKK had been brought together by Ocalan, who was elected the general secretary of the party. The main aim was to create an independent united socialist Kurdish state and then transform Turkey into a socialist republic.

In 1984 following brutal repression during the 1980 military coup, the PKK began its armed guerrilla struggle against the Turkish state; and to date, over 50,000 people have died in this war. In the late 80s and early 90s the PKK started becoming a mass movement. Women also began joining PKK ranks en-masse at this time because of Ocalan’s analysis of the gender problem and the need for gender-equality to attain a free society.

From the late 80s and early 90s onwards Ocalan also began speaking of autonomy or a federative structure as a possible solution to the Kurdish question in Turkey. As Ocalan’s popularity rose amongst the Kurdish people and his influence deepened in the Middle East, he became a danger to the West. In 1998 he was forced out of Damascus and went on a three-month odyssey through Europe and then Africa looking for refuge. He was kidnapped in Kenya while waiting to receive news from Nelson Mandela on possible refuge in South Africa, in what was an international conspiracy carried out by the CIA, Mossad and MI6, who then handed him over to Turkey. Since then Ocalan has been kept in solitary confinement (he meets an hour a day within democratic autonomy, gender-equality, communalism and ecological with five other inmates who have been there since 2009), on an island prison.

It is reported that PKK has moved from support for orthodox Marxism-Leninism towards support for ‘Democratic Confederalism’. How did this change come about?

The PKK’s transformation did not happen overnight. One can find seeds of the change strewn across many of Ocalan’s books and speeches long before he was imprisoned. But Ocalan calls his odyssey through Europe and eventual capture “a secret blessing,” “a rebirth”, because it gave him the opportunity to see the monster that the nation-statist ideology had created within him, within the PKK and within Europe’s governments. For him insistence on forming a Kurdish nation-state had meant insistence on patriarchy, class-based civilisation, exploitation, all forms of hierarchy and the destruction of the ecological world, things that the PKK were supposed to be against.

Being imprisoned also gave Ocalan the opportunity to read and write more; he read historians and revolutionary thinkers such as Immanuel Wallerstein, Murray Bookchin, Andre Gunder Frank and Bakunin; as well as philosophers Hegel, Nietzsche, Spinoza and Descartes. These readings shaped what would become Ocalan’s alternative to nation-statism, sexism, capitalism and industrialism; which is Democratic Confederalism and its tenets: a democratic nation

To develop his ideas over the years Ocalan has written 10 books in prison. His final five-book opus is called The Democratic Civilisation Manifesto. These books are on the PKK curriculum and are read widely by those close to the movement. More importantly the tenets mentioned above are put into practice all over the world where there is a Kurdish community. Although there are obvious difficulties, the people see the benefits of this, as in Kobane, where the resistance goes on because of the belief the people have in the ideology.

What is the role of the Turkish state in the current conflict and what hope is there for the Kurdish peace process?

In 2013, Ocalan’s peace declaration was read out at the Kurdish New Year (Newroz) celebrations in Amed (Diyarbakir). There was great hope that the peace process would develop rapidly, but unfortunately this did not happen. The main reason for this is that the Turkish state has still not changed its mentality regarding the Kurdish right to self-determination. Although there has been a ceasefire for more than 18 months the AKP government took the state’s war against Kurds over the border into Syria and supported groups like Al-Nusra and the Islamic State to prevent Kurdish autonomy. This reflects the Turkish state’s approach; they want to solve the Kurdish question by limiting or preventing Kurds from gaining any form of self-governance, international status and internal unity. This in itself means deadlock and a continuation of war.

The PKK and the Kurds know that every war must have a peace.

However Ocalan, the PKK and the Kurds know that every war must have a peace, so they are insisting on nourishing the peace process and developing it from the discussion phase, which is where it is now, to the negotiation phase. If the Turkish state can change its mentality it will democratise Turkey and solve the Kurdish question, if not then it is likely that the war will intensify, if only for a short period.

What are relations like between the PKK and the Government of Iraqi Kurdistan?

Relations have always been frayed between the PKK and parties in the Kurdistan Regional Government (KRG). There has been internal fighting between Kurds over the years because of the Kurdistan Democratic Party’s (KDP) collusion with the Turkish state in attacking PKK guerrillas and trying to divide the PKK (the KDP governs in the KRG). There has been political wrangling to see who will dominate Kurdish politics in the region. This reached its zenith recently when the KDP took part in a plan to suffocate the Rojava Revolution by digging trenches on the Syria-Iraq border and implementing an embargo.

However, since the PKK entered KRG territory in August 2014 to rescue the Yazidi Kurds stranded on Mount Sinjar following the IS attack, relations have strengthened between the PKK and parties in Southern Kurdistan. This finds its reflection in the Duhok Agreement between the KRG and PYD and in the arms and peshmerga fighters sent by the KRG to Kobane. The next important step will need to be a National Conference attended by all Kurdish parties.

Can Syria emerge from the current crisis as a secular, progressive state?

The PYD are in support of a unified, secular, democratic Syria that will recognise Kurdish autonomy in the North. This stance will be very important in determining the future of Syria. However there are many different forces also fighting within the area, and not many of them are secular or progressive. Therefore, it is imperative that all secular, democratic forces unite and develop their struggle against proxy groups such as the IS and Al-Nusra Front.

In regards to the Assad regime, I do not believe that it will be toppled militarily, so at some point there will have to be dialogue. We can see steps towards this in the international community and Assad also seems like he comprehends the importance of coming to the negotiating table. When that time comes if the progressive forces are united and organised then it will be possible for a democratic, secular Syria to emerge.

Women are prominent within the PKK. How did this level of equality evolve and is it common to wider Kurdish society?

The prominence of women in the PKK is completely to do with its ideological standpoint. Ocalan equates the freedom of society with the freedom of its women. He bases this on the analysis that “women are the first nation/community to be enslaved and exploited.” Therefore the involvement and prominence of women in every sphere of life, and the uncovering of all the values women created means that life will also be freed for all of society and gender-equality will develop.

Of course a nation that sees its women fighting on the front line is also changing very rapidly and one can see this change in the majority of the Kurdish people. But military representation is not the whole story. The Kurds have the most female representation in politics within Turkey and Syria and the co-chair system means that all civil institutions need to have a male and female chair; as well as there being a 40% quota for women in all organisations.

Moreover, in a region where patriarchy is still very strong, it is not a surprise that women turn to the PKK and the Kurdish Movement in general. The women of the YPJ fighting the Islamic State in Kobane are a case in point. They see their freedom in the struggle and know that this freedom will not be postponed until after the revolution, because it is itself at the heart of the revolution.