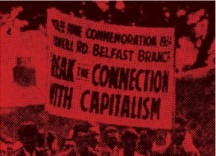 The period of existence of the Republican Congress was short. The organisation split after five months, leaving two rival Irish Citizen Armies denouncing each other, a substantial section of Congress activists joining the Labour Party and others simply dropping out of political activity. Congress was effectively defunct by mid-1936 just a year and a half after its foundation.

However, the organisation has left an indelible mark on the history of the Irish left; due to the seriousness of those involved and the breadth of its agitation. During its existence the Republican Congress helped organise tenant leagues in Dublin’s north and south inner-city, and in newer areas such as Cabra; activists prevented evictions by slum landlords, agitated among small farmers in Achill, and supported striking miners in Castlecomer and strikes at the Somax shirt factory in Dublin and the De Selby quarries in Bray. And of course Congress activists put opposing the Blueshirts and fascism as a central part of their political activity.

This also involved international solidarity with the victims of fascism. This was not always easy or popular in 1930’s Ireland. When Italy invaded Abyssinia for example, many Irish nationalists sided with Italy, for various reasons. Congress responded by explaining the reasons “why Ireland must support Abyssinia” and explaining why despite “much confused thinking” by some republicans, largely “because British imperialism opposes Italy” in fact the struggle by Abyssinia against Mussolini was the “spearhead of anti-Imperialist struggle today.” Of course this solidarity, and on the part of several Congress members, physical defence and indeed giving their lives, was again apparent in 1936 when the Spanish Republic was attacked. A very unpopular cause in the Ireland of the day.

Similarly in July 1935, when in response to anti-Catholic violence in Belfast, there was a wave of anti-Protestant attacks in the Free State, Congress denounced what it called the “pogroms (that) had crossed the border” and demanded that the “victimisation of Protestant workers (and) cowardly attacks on Protestant property” should be “immediately stopped and the ringleaders brought to book.”

The group also organised alternative Armistice Day commemorations in November 1934 and 1935. Under slogans such as “Honour the Dead by Fighting for the Living”, “We want war – on the slums” and “Freedom for this small nation”, war veterans, republicans and socialists presented an alternative to the British Legion’s commemorations and the increasingly sterile IRA disruption of them.

Congress worked in a period of intense anti-communist hysteria and clerical hostility. Congress activist Frank Edwards lost his job because of this. But violence and intimidation were also common. From the Animal Gangs in 1934 to attacks on the Left at the Easter 1936 parade in Dublin, followed by the wrecking of the Congress offices by mobs, Congress activists faced direct threats to their personal safety. And last but not least; the most iconic image of Congress is the photograph of the Shankill Road contingent at Bodenstown in 1934. The numbers of Belfast Protestants who attended are occasionally exaggerated and the incidents at Bodenstown misunderstood or misrepresented, but it was still significant that Congress could attract support from Protestant socialists, which of course also reflected the radicalisation after the Outdoor Relief riots of 1933 and realignments within Belfast labour politics.

Congress had potential. The vote on whether or not to commit the IRA to the Congress appeal was very close at the 1934 IRA Army Convention. A significant number of IRA officers, along with 16 trade councils or union branches, the Kerry-based Republican Labour party, the Northern Ireland Socialist Party (formerly the Northern section of the Independent Labour Party) and the Irish Citizen Army, (which gained a new lease of life with Congress) all endorsed the organisation’s initial Athlone manifesto. Though only in existence for a couple of months Congress candidates contested local elections in June 1934, with two elected, in North Westmeath and Dundalk.

The threat the Free State establishment believed Congress posed is evident in a September 1934, Garda Chief Superintendent report which stated: “It is thought that the orthodox IRA will never be a serious menace to the Government as at present constituted. It is thought that the Republican Congress Group, under Peadar O’Donnell, which endeavours to get control of the Labour organisations in the country for the purpose of creating general social disorder and internal chaos will be a much greater menace. The more this organisation’s efforts are thwarted by the existence of the orthodox IRA the better. If the latter ceased to exist there would be much more recruitment to the Congress ranks with the inevitable social consequences.”

The initial surge of activity by Congress reflected the optimism of thetime – despite setbacks and huge threats (fascism in Europe obviously) – it was still possible to believe in a socialist future and have confidence that the Left would win out.

Congress was a split from the IRA and denounced as such; its activists were accused of inciting “mutiny and indiscipline” within the republican movement, the IRA claimed that Congress would “enter the Free State parliament (and) inevitably…follow the road which has been travelled by other constitutional parties…” Congress leaders Peadar O’Donnell and Mick Price were court-martialed and dismissed with ignominy. Pressure was brought to bear on many of the signatories of the Congress appeal to recant and several ex-IRA officers did so. Congress in turn accused the IRA of taking the “same attitude as the Irish Hierarchy and the (Irish) Independent towards the revolutionary workers within their ranks.” Frank Ryan described “the leadership of the Belfast units (as) among the most reactionary factors in the IRA” and so on. There were threats and clashes over control of arms and as well as incidents of fist fights between the two groups at Bodenstown in 1934 and less well-known but perhaps more bloody fighting at the 1935 Wolfe Tone commemoration.

Despite an impressive number of individual trade unionists, including William McMullen, the vice-president of the ITUC, and Barney Conway of the Workers’ Union of Ireland, the mainstream labour movement was not involved as a body in Congress.

The Congress split left deep scars within the republican movement for generations with many blaming it for disrupting and weakening it. In 1966 for example Sinn Féin president Tomas Mac Giolla was loath to identify with the legacy of the Congress, claiming that it had “became identified with communist movements abroad but no one can say today that we in Sinn Féin are identified with any communist parties either at home or abroad.” (This attempt to distance the then increasingly left wing leadership to the republican movement from Congress was despite the fact that former leading Congress figure George Gilmore’s 1966 pamphlet on labour and the republic was very influential on Mac Giolla and his comrades’ thinking). During the same period IRA Chief of Staff Cathal Goulding would conclude in contrast that the lesson of Congress was the need to keep the republican movement united and to avoid a split, arguing that if O’Donnell and his allies had done that they would have eventually prevailed.

Could Congress have won over the majority of the IRA? In 1931 the IRA had actually adopted, on paper, a very radical political programme in Saor Éire. The organisation had moved left under the impact of the Great Depression and the arguments of those like O’Donnell. In 1931, Chief of Staff Moss Twomey, asserted “If it is communism to undo the conquest…to destroy landlordism…to end robbery and exploitation by a privileged minority, then Tone, Emmet, Mitchel, Lalor, Connolly, Pearse and Mellows were communists and the Irish Republican Army is a communist organization.” However, by 1933, the intense clerical backlash against Saor Éire had a deep impact on the IRA. The 1933 convention voted for a ban on communists being IRA volunteers. But there was also substantial support for the IRA’s Left. O’Donnell claimed that his “first allegiance has always been to the Irish Working Class movement”. The stresses between these two positions would lead to division a year later.

The legacy of Congress remains contentious. Conditions today arevery different from 1934. While most Congress activists would have believed that some form of socialism was being built in the Soviet Union and that might emerge triumphant, that position is no longer relevant. Many could believe in 1934 that large numbers of northern Protestant workers were breaking from Unionism; today there is little belief in that. Yet the story of Republican Congress holds a fascination for Left activists still struggling to find a way forward for progressive politics in the Ireland of today.

This article is an edited version of a talk presented to the Peadar O’Donnell Socialist Republican Forum.