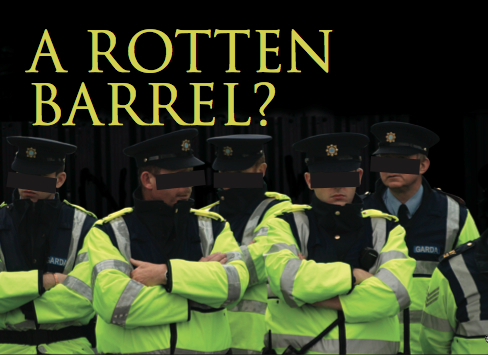 With a leadership that is politically appointed, an unwillingness to accept oversight and a history of conflict with working class communities, are the Gardaí providing an acceptable policing service? Francis Donohoe reports.

Did high-ranking members of the Gardaí collude with a major drug importer to entrap small-time dealers while allowing massive amounts of heroin and cocaine to be imported into Ireland? When these activities were uncovered did some Gardaí then launch a campaign of electronic surveillance of the Garda Síochána Ombudsman Commission (GSOC) in order to derail its inquires?

These are just some of the very serious questions which currently hang over policing in the Republic of Ireland. The specific issue above relates to the relationship between a Louth-based drug dealer, Kieran Boylan, and a special unit of the Gardaí for several years around 2000.

Last year, as GSOC continued to investigate the Boylan case its Chairman, Simon O’Brien, a former leading London police officer became suspicious that his offices were under surveillance. He brought in a UK company, Verrimus, with links to the British military and police, who confirmed his suspicions that GSOC was likely under electronic surveillance of a type which could only be conducted by a state agency.

When these allegations became public earlier this year (2014) they were met with claim and counterclaim. Minister for Justice, Alan Shatter, and Garda Commissioner, Martin Callinan, who is at the centre of the allegations, at first attempted to dismiss them but under political pressure, in February, the Government appointed a lawyer to ‘review’ the information relating to the possible bugging of GSOC.

The refusal of the Minister to initially accept GSOC’s concerns has seriously undermined the body which was established in 2005 to investigate police misconduct in the wake of revelations that were emerging at the Morris Tribunal into Garda corruption in Donegal in the 1990s and early 2000s. The Boylan investigation is just one of several that GSOC is currently carrying out into extremely serious allegations of Garda misconduct. In attempting to investigate these matters GSOC has encountered many obstacles, including Gardaí systematically failing to attend interviews and document requests being ignored for years.

An opposition to oversight is not new to the Gardaí. Commenting on the force in 2012 former GSOC chairman, Conor Brady, said; “An Garda Síochána has been a fortress shut against outsiders for 90 years.”

The approach of Gardaí to issues of misconduct and drug crime has been a source of major concern to community activists in working class communities for decades.

Joe Mooney, a community activist in the East Wall area of Dublin, and a former member of the Coalition of Communities Against Drugs (COCAD), said: “The community response to the drugs crisis in Dublin resulted from the failure of the State to offer protection to hard pressed working class communities during the 1980s and 1990s. It was a real eye opener for some of those involved, to see the level of Gardaí harassment aimed at activists. Having heard for years that the Gardaí were under- resourced and seeing a lack of a serious response to the drugs problem, suddenly Gardaí were available in large numbers to police anti-drug marches.”

He added: “Anti-drug activists faced criminal charges, often for very spurious reasons. On occasion well-known drug dealers and the most anti-social of junkies were used as prosecution witnesses against decent community activists. That behaviour, while a drugs crisis continued did not inspire confidence.”

There remains unease among many working class communities in Dublin concerning policing. A Dublin West resident, who preferred not to be named, stated that in one incident after Gardaí were alerted to the activities of a drug dealer, the dealer then called to their home to tell them they knew they were “informing”. In the Boylan case, there are similar allegations of information seemingly being relayed from Gardaí to a drug dealer.

On a less serious level there are also complaints of Gardaí advising people that if they make a formal report of anti-social behavior the perpetrators may learn the names of their accusers. One Dublin inner- city resident believes this is due to a “wish to keep crime statistics down and do less work.” A West Dublin mother told LookLeft that while attempting to make a complaint to Gardai she was dismissed as “just someone from the €20 houses”, in reference to her family living in social housing.

In contrast, there are also reports of active attempts by some Gardaí to foster good community relations, with involvement in children’s boxing clubs and youth groups – but these have not overcome a wider distrust of the policing service.

In the most serious cases, families such as those of Terence Wheelock, who died in Garda custody in 2005, and Brain Rossiter, who died after a period in custody in 2002, have long demanded fuller explanations concerning their children’s deaths.

In the case of the Wheelock family, their claims of Garda intimidation were at least partially confirmed when a journalist reporting on the case witnessed Gardaí shining searchlights into the windows of their home in the Summerhill area of Dublin’s North Inner city in the weeks after Terence’s death.

Serious questions have also been raised about the Gardaí’s approach to the black community. In 2010 an EU survey found that Sub-Saharan Africans are twice as likely to be subjected to Garda stops as other members of the public. The stop rate for Sub-Saharan Africans in Ireland was the highest for any ethnic minority surveyed in any of the 27 EU member states.

The approach of Gardaí to working class and immigrant communities is in stark contrast to the revelations about the removal of fixed charge road traffic penalty points for richer members of Irish society.

The penalty point scandal was revealed by John Wilson, who has since been forced out of the Gardaí, and Sergeant Maurice McCabe. They brought their concerns to the attention of senior Garda officers, GSOC and eventually politicians; in response the whistleblowers claim to have suffered serious harassment from fellow Gardaí.

An inquiry by the Garda Inspectorate published in March found that out of 113 high ranking Gardaí with the ability to remove plenty points, 55 had breached the rules. Its findings were in stark contrast to an earlier internal inquiry conducted by the Gardaí which failed to find any serious issues.

Although the names of the thousands of motorists who have had penalty points removed in suspicious circumstances have not been publicly revealed, they are known to include Gardaí, relations of Gardaí, judges, politicians, sports personalities and journalists.

One defence offered by Gardaí to the large-scale removal of penalty points for unspecific reasons and other policing anomalies, has been officers ability to use their ‘discretion’.

Commenting on this practice, United Left TD, Clare Daly, said: “In order for a system of justice to exist, individual discretion must always be balanced by consistency and uniformity in order to ensure fairness when the law is applied”- things found to be lacking in the approach of the Gardaí.

Many believe the issues surrounding the Gardaí point to the need for a fundamental overhaul of policing in the Republic. Workers’ Party President, Mick Finnegan, said: “Senior management have failed those Gardaí on the front line. Ireland needs a force devoted to protecting citizens’ security, which treats all sections of the community equally, and which enjoys the consent and trust of everyone. This is not about individuals: it’s the system that is the problem, and it traps good and bad officers alike.”

He added: “Structures, training, forms of accountability: all need to be designed from scratch. It needs to be a body stripped of prejudice, that defends hard-won democratic freedoms, and protects communities. It’s time to open the debate on what shape a new policing service should have.”

For an example of what a root and branch reform of policing looks like, the Republic need search no further than Northern Ireland. Under the terms of the Good Friday Agreement and the Patton reforms the RUC was replaced by a PSNI which is overseen by a Policing Board established to “secure for all the people of Northern Ireland an effective, efficient and impartial police service which has the confidence of the whole community.”

Units of the RUC with questionable histories were also disbanded and not reconstituted into the new PSNI, while a Police Ombudsman was established with powers and funding which greatly outstrip its southern counterpart.
At a community level, Local Joint Policing Partnerships were also established. No similar effective community level oversight of policing exists in the Republic. Sinn Féin TD, Brian Stanley, told RTÉ’s Primetime:

Denis Bradley, the former vice-chairman of the Northern Ireland police board, has stated: “In most modern societies, most democracies, something is always placed in between (the Department of) Justice and the police service to give a certain distance and to also involve as much of the society as possible.

“So what you mainly end up with is some kind of policing authority which is made up of people from different political parties plus independently minded people, so that you have a greater roundness, so you do not place oversight in the hand of any one Minister or political party.”

A charter for better policing:

• Establishment of a powerful Police Authority with members draw from all sections of society and with the power to appoint senior police officers and remove them.

• Strengthen and fund GSOC – ensure no Gardaí or retired Gardaí are employed in investigations, expand its power
of investigation to cover the Garda Commissioner and access to all Garda records including the Pulse computer system.

• Establishment of local police partnerships with membership including community activists and civic leaders with the power to call Gardaí to explain operations.

• The immediate removal of all Gardaí found to have been involved in systemic misconduct.

• The establishment of public inquiries into the policing of working class communities and to review current and historic relations between Gardaí and major illegal drug importers.