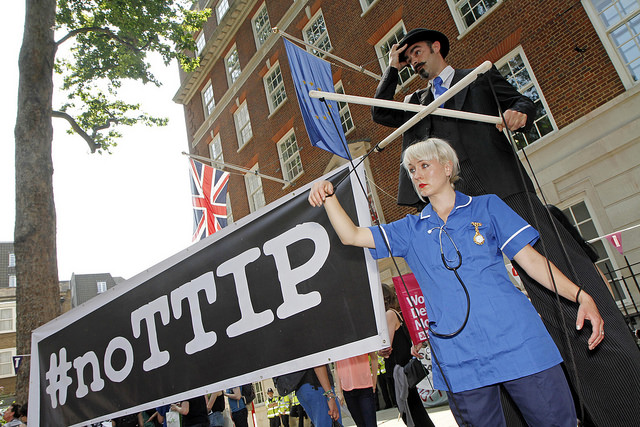 The European Union and the the United States are currently in the process of negotiating the Transatlantic Trade and Investment Partnership (TTIP), a far-reaching trade deal that will have profound effects on national regulatory powers.

According to Eric Byrne TD, “As a nation and as business interests we sing from the same hymn sheet” when it come to TTIP. If anyone was worried about potential damages done by the deal, thankfully Byrne’s Labour colleague, Sean Sherlock, stresses that, “we are looking at this from the point of view of the upsides and are not viewing it from the point of view of the downsides.”

These reactions owe a lot to the way that TTIP has been portrayed by its advocates, who argue that it will create jobs and growth for both partners. But critics say that the ‘trade deal’ will do little to increase trade and much to limit the legislative power of national governments.

Critical scrutiny of the deal is severely limited by the extreme secrecy surrounding negotiations. The most sensitive documents, the deregulation demands, are kept in designated reading rooms where they cannot be copied, and are accessible only to government officials. Elected representatives of the EU or Congress are not given access to the demands of the negotiating partner, while the Commission has tagged documents in order to be able to trace leaks back to their source.

Trade between the US and the EU is already at a very high level, with goods worth approximately €1.8 bn exchanged across the Atlantic every day. With minimal tariffs in place between the two continents, negotiations are not about such ‘traditional’ trade barriers but rules and regulations, such as those on environmental standards and working conditions. As Heidi Hautala, a Finnish Green MEP argues, “In essence, it is not so much about trade but about reaching a political agreement on ‘regulatory cooperation’ in the form of a binding bilateral treaty.”

In addition, the expected growth from the deal is very small. A Commission impact report estimates GDP growth of 0.5% in the EU in the ‘best-case’ scenario. Clive George, a former trade impact assessor for the European Commission, argues that the deal will offer “minimal economic benefit at best.”

“The EC’s study estimates that it would take ten years for the agreement to have full effect, during which period the impact on economic growth would not be 0.5%, but 0.05%, for ten years only. Furthermore, this is for the most optimistic of the study’s scenarios (or guesses) for what might actually be achieved in the negotiations. For its more realistic scenarios, the study estimates an increase in GDP of little more than 0.1%, i.e. an increase in the GDP growth rate of 0.01% for the ten year period.”

The experience so far of other US-led bilateral trade deals does not inspire hope in jobs growth. As George Monbiot pointed out in the Guardian in December 2013: “Barack Obama promised that the US-Korea Free Trade Agreement would increase US exports by $10bn. They immediately fell by $3.5bn. The 70,000 jobs it would deliver? Er, 40,000 were lost. Bill Clinton promised that the North American Free Trade Agreement would create 200,000 new jobs for the US; 680,000 went down the pan.”

The Commission itself admits that there could be significant adverse effects on employment, warning in an impact assessment report of “prolonged and substantial adjustments costs” to labour. John Hilary, executive director of War on Want, points out, “companies will be encouraged to source goods and services from US states where labour standards are lower and trade union rights are non-existent”. This, he suggests, could lead to a race to the bottom, where European workers’ rights are put under pressure in order to compete with the United States.

“Existing and future EU regulation would have to go through onerous procedures and lengthy negotiations with a strong business presence, in a way that would be likely to avoid any meaningful democratic debate”

The aim is to standardise regulations as much as possible, with, for instance, the UK and German governments seeking relaxation of US financial regulations introduced in the wake of the financial collapse, while American companies will demand access to European healthcare markets. Pre-TTIP standardisation has already led to dilution of proposed EU data protection laws, after intensive lobbying from the Obama administration.

The Financial Times reported an EU official saying that, “[Opponents] said it would make [data] transfers more difficult and it was clear at that time already that eventually we would have started trade negotiations. We didn’t want to have any complications on this front.” A leaked document shows that TTIP will commit the EU to establishing a Regulatory Cooperation Council, which will allow business groups special input into current and future EU legislation. According to researcher Kenneth Haar, “This model put the business groups at the table with regulators to essentially co-write legislation. Existing and future EU regulation would have to go through onerous procedures and lengthy negotiations with a strong business presence, in a way that would be likely to avoid any meaningful democratic debate.”

Public procurement schemes will be limited, meaning that preferential procurement for social and environmental purposes such as ‘buy local’ programmes will be disallowed. Also threatened is the EU’s use of ‘the Precautionary Principle’, where products are considered unsafe unless proven otherwise, which is considered a protectionist measure in the US.

The most dangerous element of the proposed deal is the establishment of investment protection clauses, which will allow private companies to sue states for loss of earnings due to legislation through the Investor-State Dispute Settlement (ISDS) mechanism. The ISDS is an arbitration process which operates outside the normal civil, legal and commercial court processes within the signatory states, with one of the judges appointed by the corporation, the second by the defendant state and the third agreed by both. States cannot appeal the decision of an ISDS decision to their own Supreme Court or to any international tribunal and all decisions of an ISDS arbitration create binding legal precedent.

These processes are already in place and in use due to previous bilateral agreements such as NAFTA. The Slovakian government was successfully sued for €29.5m for imposing regulations on private health insurance companies. US energy company Lone Pine Resources is suing the Canadian government for introducing a moratorium on fracking in Québec. Vattenfall, a Swedish energy corporation is suing Germany for €3.7 billion for lost profits because of the German Government’s decision to phase out nuclear energy. The same company had earlier sued the city of Hamburg because they considered environmental standards for coal power plants to be overly strict. The greatest payout so far, though, was the $1.77 billion paid by Ecuador to US oil company Occidental, after the Latin American nation terminated an operating contract.

The Irish Congress of Trade Unions submission on TTIP comments that “the inclusion of investor protection provisions in TTIP is fundamentally misguided, wrong and inequitable. The solution is to drop the enhanced investor protections and the system of ISDS from TTIP completely, and to allow national legal systems to do their job relying on existing property right so [sic] companies.”

The submission called for “an overhaul of the TTIP proposals to protect the right of governments to regulate, to maintain existing regulatory protections and remove provisions that will open up public services to liberalisation.”
There is concern that the treaty will also push towards greater privatisation of state services, and US Trade Representative, Demetrios Marantis, has commented that the deal will “address the operation of any designated monopolies” in public utilities. Dr Tom Healy of progressive economic think tank NERI comments that “EU negotiators will claim that publicly funded health and education services are off the table as far as market liberalisation is concerned. That remains to be seen.”
“Public service procurement contracts could be further opened to private providers from across the EU/USA. Public utilities already privatised may be difficult to bring back into public ownership (such as happened in the case of water services in some European cities) as a result of new agreements”.

TTIP creates an even more powerful force for attacking regulations; for maximising corporate profit at the expense of workers and the community; for environmental degradation; and for the erosion of democracy across two continents. International trade can be fostered, but must be built on the foundations of equality between partners, respect for workers and consumers, environmental protection and maximising the public good.