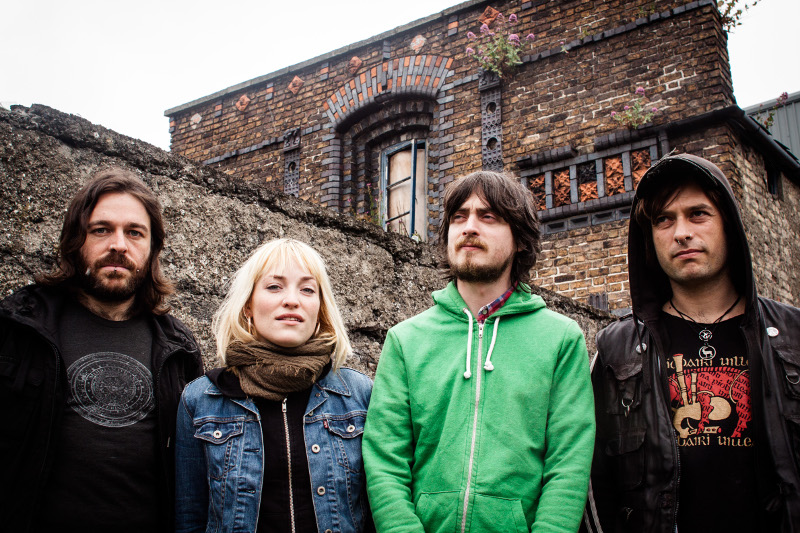 Described by one reviewer as “the only folk album that has excited me in quite a long time”, Cold Old Fire is a unique and thrilling contribution to Irish folk by Dublin band Lynched.

Named for the Lynch brothers, Ian and Daragh, the band had unlikely origins; it was started to express the brothers’ love for anti-authoritarian politics and David Bowie.

As Daragh explains: “We started out as a kind of a joke band around 2001 with myself on a bodgey acoustic guitar and Ian on tin whistle, playing silly songs about being a punk, drinking, hating the police and the government, as well as championing the cause of anarchy and glam-rock. Strangely, we began getting asked to play at punk gigs, which often involved some bits of pantomime, like throwing little envelopes with messages in them into the audience, or packets of crisps that we’d robbed.”

This ‘joke band’ toured across three continents, travelling from Canada to Mexico in one go, as well as playing across Europe and Australia. As time went on, their interest and abilities in traditional music developed, with Ian learning the Uilleann Pipes and Daragh developing his guitar skills. As Ian explains, trad “is something that we have always been interested in,” but “we got more and more obsessed with it as the years went on. Traditional song to me always seemed to me to be more open, more honest and in some way more punk than punk itself. It has always seemed to me that anonymously composed songs passed down by generations, not for money or fame, but out of a pure resonance for what the song was expressing, were truly the “voice of the people”. All aspects of the rich panorama of life can be found in these songs, which were largely composed, sung, and preserved within the lower classes.”

Daragh agrees with this assessment, saying “Punk and folk are generally coming from the same place as far as I’m concerned – songs about peoples’ lives, usually learned and performed in a very DIY, community setting – just with different aesthetics.”

As they got work sessioning in Dublin pubs, the band expanded.

“We began attending our first regular sessions in the Thomas House, run by another infamous character, Fred Fortune. We met Cormac at these sessions, and Radie a couple of years later at the Sunday sessions we did in Sin É, so when we started recording some new demos we asked them to do a bit of backing vocals and instrumentation. This quickly resulted in us all getting quite excited and becoming a fully fledged 4-piece.”

Radie and Cormac came from the opposite direction to the Lynched brothers, having developed their skills in more formal, ‘militant purist’ settings.

The band’s unique style gave them a little more space to flex their creative muscles, “a definite softening of my trad ideals” as Radie says, what Cormac describes as “something that’s more expansive and weird, yet still rooted within the tradition”.

The band soon began recording together in the Irish Traditional Music Archive. With the help of Arts Council funding, these songs were the first step to the new album.

The album itself draws on a diversity of sources; as well as Irish trad, there are folk songs from England, Irish Traveller songs, a cover of a track from psychedelic folk group The Incredible String Band, and original compositions, including one based on the work of horror writer HP Lovecraft.

But perhaps the album’s standout track is the eponymous Cold Old Fire. Co-written by Daragh Lynch and Cian Lawless when the two were unemployed, “with nothing but regular trips to the Navan Road Social Welfare office and Fred Fortune’s Sunday evening Thomas House sessions to sustain us,” the track has strong political overtones. Ian points out that “economic strife and emigration as themes are one of the fixtures of traditional song. Some of the songs that were written in the last 200 years or so could easily be written now, save for some linguistic differences.”

They may be some way from glam-rock and anarchy, but Lynched bring a unique energy, wit and talent to trad music. Their album can be downloaded from http://lynchedfolkmiscreants.bandcamp.com/