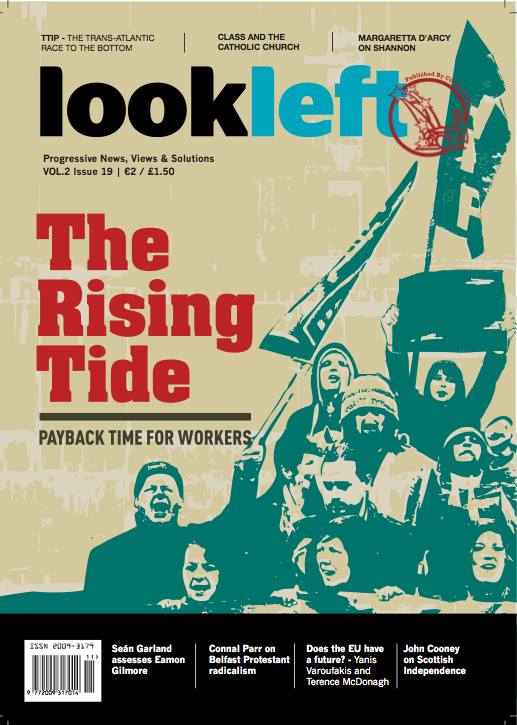 LookLeft 19 is in Easons stores and hundreds of selected newsagents across the island now. Still only €2 this issue includes former Worker’s Party President Séan Garland’s assessment of the career of Eamon Gilmore, an exclusive article by Greek economist, Yanis Varoufakis, on the failure of European Social Democracy, an interview with new Socialist Party TD Ruth Coppinger, an examination of the growing militancy among trade union members in Ireland and John Cooney on Scottish Independence and much, much more…

CLASS AND THE CATHOLIC CHURCH

Brian McDermott and Kevin Squires discuss the rise of racism on both sides of the Border.

Kevin Squires meets Ruth Coppinger to discuss her aims in the Dáil.

Osal Kelly discusses how to put a lid on a the bubbling housing market.

Dara McHugh and Padraig Mannion discuss the threat to democracy from the secretive trade deal.

WHAT NEXT FOR EUROPE?

Yanis Varoufakis and Terry McDonough discuss the fall of European social democracy and look at how the Left can rise instead.

NO NAZIS AT MALMÖ

Neil Dunne discusses the reactions of Malmö FC to the stabbing of a fan by neo-nazis.