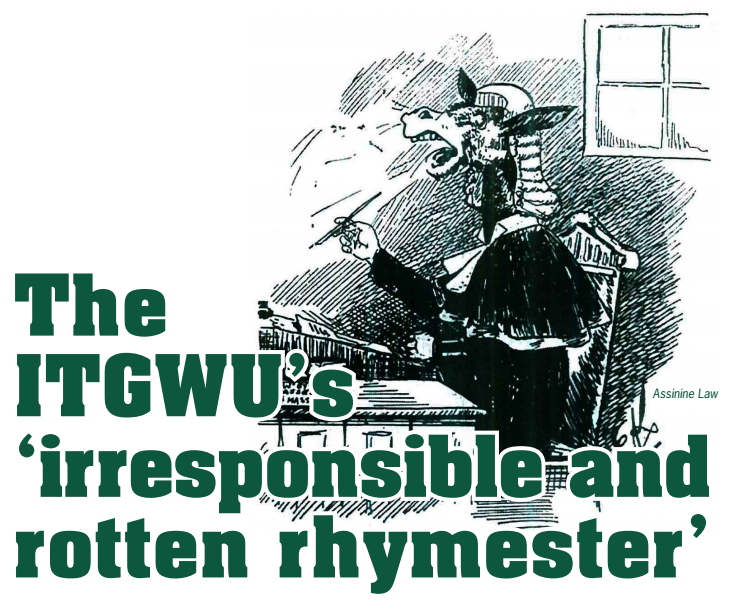 Last Autumn I had the pleasure of attending a performance Andrew Patrick Wilson’s one act play Victims at the Sean O’Casey Community Centre in Dublin’s East Wall, one of the many “Culture Night” events to be organised across the country.

‘Pleasure’ is perhaps the wrong word, for Victims is a remarkably gloomy and depressing play. Set exclusively in a decrepit one-room tenement, it was first performed on 26th December 1912 at Liberty Hall, with Wilson and Delia Larkin (James’s younger sister) starring in the main roles. Delia had established a small dramatic company made up of trade union members at Liberty Hall earlier that year, with Abbey Theatre actor Wilson, who was also the sub-editor of the union’s weekly Irish Worker paper at the time, soon coming on-board to help train the amateur thespians.

‘She is not my slave,’ the witch answered, with a horrible grin; ‘she is my employee!’

Victims tells the story of an impoverished young married couple who are forced to watch their infant child literally starve to death because the husband, a mechanic named Jack Nolan, has been blacklisted by bosses due to his role in a strike and lockout several years earlier. As can no doubt be imagined, it is a hard-hitting piece of theatre not for the fainthearted.

Dismal and grim propaganda was not Wilson’s only forte: he that took a very different approach to attacking capitalism and highlighting social injustice. His first contribution to the paper was The Sackmender’, a short story in which the narrator wanders into a foul, gloomy cavern during a stormy night to behold a ‘fearful old woman’ mercilessly whipping a trembling girl dressed in rags who is sitting in a huddled heap frantically sewing hundreds of sacks:

Still the girl worked on, rapidly plying her needle, folding a finished sack and turning to another again. Her eyes were sore and red; her whole body seemed to tremble under the drudgery and toil, but when she showed the slightest inclination to halt the cruel whip lashed again, and once more she feverishly went on with the unrelenting labour. The visitor turned on the witch with a fury. ‘Why treat your slave like this?’ he asked. ‘She is not my slave,’ the witch answered, with a horrible grin; ‘she is my employee!’

An indictment of the cruel working conditions endured by so many poor Irish female workers at the time, this story appeared alongside an article by Delia Larkin regarding a specific Dublin employer of ‘sweated’ women workers. The firm in question was Keogh’s Sack Factory, with a reader of the Irish Worker sending a letter of praise to the paper the following week, remarking that ‘a more lucid and indisputable comparison’ between Keogh’s and the gloomy cavern in Wilson’s story could not have been better drawn.

In addition to his plays and short stories, Wilson also contributed a number of comic poems to the Irish Worker. Some of these appeared to great effect alongside accompanying cartoons by Dublin artist Ernest Kavanagh, including the memorably satirical ‘The Assinine Law’, which ridiculed the Irish legal system in September 1912 as follows:

’Tis said that the Law is an Ass, so I hear!
That it is a most vicious Ass is most clear
It careers around madly, and bites the poor badly
While kicking them gladly in the rear.

It’s the Classes who furnish the Law, do you see?
And the Masses just suffer that Law, oh dear me!
If the rich rob the poor, it’s quite (L)awful, I’m sure,
But it’s Ass Law as pure as can be.

A theft by the poor is a criminal act, that’s quite plain!
A rich thief is only a kleptomaniac, not the same.
The poor steal in their need, but the rich rob for greed
Though the Law says, ‘Indeed that’s no shame!’

Accompanying this poem Kavanagh’s eye-catching illustration depicted a donkey, dressed as a judge, overseeing the enforcement of ‘Law by the Classes for the Masses’. Two weeks earlier Wilson and Kavanagh had collaborated to mock the wealthy visitors that flocked to Dublin each year for the city’s prestigious Horse Show event, which was occurring later that same day at the RDS. Wilson’s poem included the lines:

’Tis out at Ballsbridge that the horses are seen.
And of finer gee-gees you couldn’t well dream.
No, nothing is new, ’tis the same old tale
That is told every year after year without fail
The horses are shown for the asses to view
And the nags have by far the most sense of the two.

In March 1913 Wilson finished up as sub-editor of the Irish Worker and temporarily returned to Scotland to work for a Glasgow theatre company, before returning to take up a position as General Manager of the Abbey Theatre, a somewhat turbulent stint best remembered for the staging in November 1914 of his labour play The Slough, which was unmistakably inspired by the great Dublin strike and lockout of the previous year.

Wilson audaciously played the role of the character based on Jim Larkin, who later wrote to Liberty Hall from America requesting a copy of the play written by a man who had once jokingly referred to himself in the Irish Worker as an ‘irresponsible and rotten rhymester’, a ‘rascally rhyming buffoon’ and an ‘ugly word-twisting baboon’.

After leaving the Abbey Theatre, Wilson returned to Scotland, where he helped establish the Scottish National Players and remained connected with the theatre, as well as producing a number of silent films and BBC radio plays.

James Curry is the author of Artist of the Revolution: The cartoons of Ernest Kavanagh (Mercier Press), and has contributed a chapter on Andrew Patrick Wilson’s contributions to the Irish Worker newspaper for David Convery’s edited collection of essays, Locked Out. A Century of Irish Working-Class Life (Irish Academic Press, 2013).