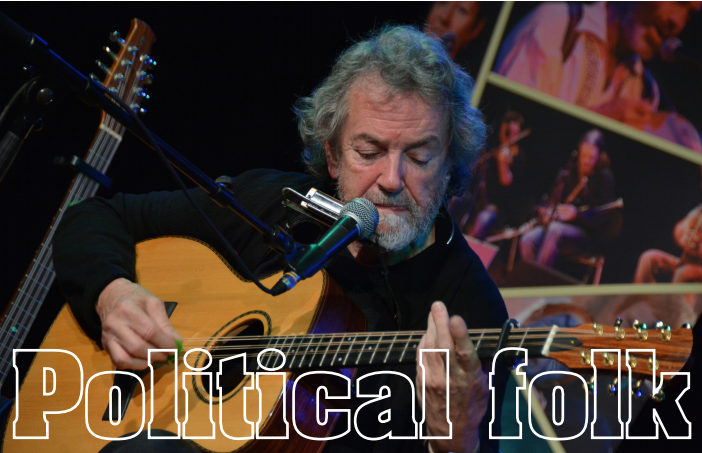 Folk music pioneer and innovator Andy Irvine talks to LookLeft about traditional music from the Balkans to Belfast.

Left-wing politics were very much associated with the folk revival in Britain. Do you think it was less so in Ireland? And how important was the political aspect to your initial interest in preforming folk music?

The British folk revival was very largely driven by the left. I was living in London at the end of the 50s and beginning of 60s and used to go down to The Ballads and Blues Club in Soho which was run, in its early stages, by Ewan MacColl and Peggy Seeger under the management of Malcolm Nixon.

I think Malcolm and Ewan were members of the Communist Party at the time and there was always a very strong left-wing feel to the evenings. I had discovered Woody Guthrie by this point and had read his autobiography Bound for Glory. I met an American serviceman who told me about the International Workers of the World and referred me to USA by John Dos Passos. The first couple of chapters are about ‘Mac’ who is a wobbly and a hobo.

Frustratingly, he never appears again in 1,000 pages! My conversion to the left was influenced by all these people and factors and probably also because my parents were very conservative! I used to help the man who emptied the dustbins of the block of flats we lived in; his name was Jack and he was a great guy. My parents were horrified and tried to stop me associating with the dustbin man! I couldn’t see the logic in the class system. When I arrived in Ireland in 1962, there was very little connection between the left and folk music. Luke Kelly was loudly vocal in championing the cause but most of us were concerned with opposing the ultra conservative and religious vibe that pertained in Dublin at that time.

What for you is the most powerful politically charged song you have performed?

That’s a difficult one. My own songs about Sacco & Vanzetti, Emiliano Zapata, Mother Jones would come into the equation but maybe the song – (O where O where is our) James Connolly – written by Patrick Galvin is the most emotional song I have sung.

You travelled extensively in Eastern Europe during the late 60s and later, what do recall of the cultural and political situation in those states during that period, and how did it change with the fall of the communist governments?

I went off to Bulgaria, Romania and Yugoslavia in the spring of 1968 and apart from returning home for a wedding in January 1969, I was there till September 1969. I went there largely with a romantic notion. I had been a child stamp collector and had been fascinated by Eastern European countries. Also, I wanted to go somewhere nobody else went and there were very few tourists hitch hiking in that part of the world at the time! I loved the people, especially in Bulgaria and of course the music, of which I had no previous knowledge, blew me away.

Me and my girlfriend travelled all over those countries and found people and police very courteous. Parties of girls and women heading for the fields in the early morning sunshine and waving at us and shouting friendly greetings were regular events.

However, after the Czech intervention (the entry of the Warsaw pact forces intoCzechoslovakia in August 1968 to depose reforming communist leader Alexander Dubček) things changed a bit. People were a little more cautious. A friendly family in Sofia who had put us up in the Summer of 1968 apologised profusely when we met them in 1969 and explained that there was an untrustworthy neighbour and that they just didn’t dare bring us home. The same thing happened in Romania. 1968 was really friendly and kind and 1969 was a bit more paranoid. A girl I knew in Bucharest lent me her and her husband’s flat but said that if we saw anyone, not to talk to them. After the fall of the communist governments, everything went pear shaped in a matter of months. I took particular exception to the pornographic magazines which appeared on newspaper stands for all to see.

What are the similarities and differences you see between the various traditions of folk music, Irish, Scottish, Balkan etc. you perform?

I don’t see much difference at all. When I first heard folk music in Bulgaria, I knew exactly what it was immediately. Ok the rhythms are pretty different but the themes are the same. I find folk songs are a very honest form of expression of the ordinary human being. The band, Mozaik, which is perhaps the happiest band I have been in, mixes Irish, Scots, Old time American and Balkan music in even measures and I love it!

You are a leading figure in the Musicians Union of Ireland (MUI). What is the current strength of union organisation in the Arts and what do you think can be done to create greater solidarity in that sector and within the wider trade union movement?

It’s a hard time. Getting individual musicians to join the union is very difficult. Many ask why they should join the MUI. It’s hard to blame them because until a union becomes strong it can do very little. And of course it can’t become strong without members. A large number of our members are RTÉ Orchestra players. They are settled people with a fixed job – which is currently under threat – and fit into the usual union pattern a lot better than individuals. Even so, a lot of the players in these orks are not members of the MUI. What can be done? Well a government with less emphasis on business and economics would help. It seems strange to me that so called Democratic governments that trumpeted so loudly at the fall of communism cannot see the unworkableness of their own capitalist outlook. Reagan and Thatcher are gone but their market economy policies live on. I think we have to find a better way. What about a bit more Keynes??!