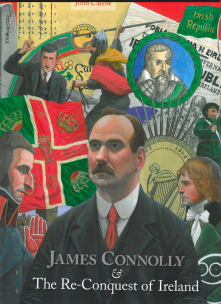 The figure of James Connolly towers over Irish socialist theory and action. In this book Professor John Callow explores Connolly’s life and the development of his ideas during the writing of the The Reconquest of Ireland.

There is a shared introduction by GMB General Secretary, Paul Kenny and General Secretary of RMT Bob Crow, devoted to a survey of the Edinburgh-born revolutionary’s significance. In it Crow extolls readers to “celebrate” working class history and Connolly – “one of our greatest sons”.

The writing of The Reconquest of Ireland spanned a critical period in Connolly’s life which included defeat during the Dublin Lockout and the beginning of World War One.

It is against this background that Connolly, attempts to grapple with major questions of economic and political democracy, nationhood and national liberation, as well as the rights of women.

In his dissection of Connolly’s thought as he wrote and rewrote The Reconquest, Callow draws upon a manuscript and other recently discovered documents from the Marx Memorial Library in London. He produces a historical tour de force which strips Connolly’s writing back to reveal the core intellect which fired his socialist activism.

Rarely does a book succeed as both a text for the general and academic reader but here Callow has produced such a work that is both accessible but ground breaking.

Beautiful and important, it is illustrated throughout, with Sean O’Brogain’s water-colours bringing both Connolly’s life and the Irish history which so enthused his thinking jumping from the page.

Launching the book in Liberty Hall in January, Prof. Callow, argued that Connolly should not be “venerated but learnt from” it is a task made easier by the publishing of this volume for which the late Bob Crow and the Jim Connell Society must be given much credit.

This book is a work worthy of its subject, a Marxist thinker whose thought remains critical to any attempt to realise progressive change in Ireland.
Francis Donohoe