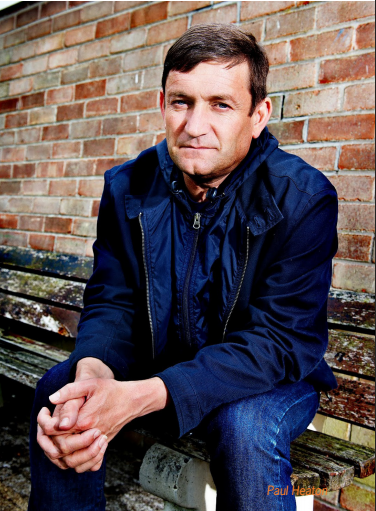 English singer-songwriter and outspoken socialist Paul Heaton has been making music for over thirty years. Starting off his career with The Housemartins (1983-88) and then forming The Beautiful South (1988-2007), Heaton has since pursued a solo career.

Born in Bromborough near Liverpool city, Heaton moved to Sheffield at the age of four. It was here that he developed his long-lasting love affair with Sheffield United. In his early 20s, Heaton relocated to Hull where he started The Housemartins with neighbour Stan Cullimore. Playing their first gig at the local university in October 1984, their debut single ‘Flag Day’ was a sharp attack on superficial charity campaigns (in the wake of Live Aid) and the Royal Family. Heaton, still only 23, wrote:

By the end of 1985, the line up firmed up with Heaton (vocals), Cullimore (guitar), Norman Cook (bass) and Dave Hemingway (drums). Their breakthrough came with their third single ‘Happy Hour’, a powerful condemnation of yuppie bars and casual sexism, which broke into the Top 5. Their debut album, ‘London 0 Hull 4’, reached number 3 in the charts. While the back of the LP read ‘Take Jesus – Take Marx – Take Hope’, Heaton has publiclytalked about his Atheist views many times since then.

The Housemartins, along with Dexys Midnight Runners, Billy Bragg, The Redskins, Fire Next Time and The Style Council, were at the forefront of 80s soul-inspired agitprop. Political songs that you could dance to. Their 1986 debut album ‘London 0 Hull 4’ remains one of the best albums of the decade and that same year saw the release of their number one smash hit a cappella cover of ‘Caravan of Love’.

Their second and final album ‘The People Who Grinned Themselves to Death’ (a reference to the Royal Family) reached number 9 in the charts but the band split soon after. Norman Cook went onto enjoy significant success as Fatboy Slim, while Heaton, Hemingway and band roadie Sean Welch formed The Beautiful South.

Asked whether he agreed with the abolition of the House of Lords, Heaton replied: “Give them five minutes notice and blow the building up

Heaton has gone onto enjoy a successful solo career and also take over a historic pub in Salford that was about to be bought and gutted by a large pub chain. The Kings Arms, open since 1807, is located a few minutes walk from the fantastic People’s History Museum and is home to a range of political groups and regular comedy/music gigs.

Still prone to upset Middle England with his radical views, he was a memorable guest on Question Time a couple of years ago. Asked whether he agreed with the abolition of the House of Lords, Heaton replied: “Give them five minutes’ notice and blow the building up”. The audience and the rest of the panel reacted with stunned silence.

After Morrrissey of The Smiths was thought to have made some xenophobic and reactionary comments in a 2007 NME interview, Heaton responded online with:

“So Britain isn’t British enough for Morrissey anymore? …In 1977 I would sit in a classroom, virtually helpless as my close friend and the only black boy in class and year Joe Sweetinburgh, would be racially and physically abused everyday by the same four or five idiots. Now exactly thirty years later, I take my six-year-old daughter to a classroom populated by white British, black British, Somalians, descendants of Chinese immigrants, African immigrants, Kurdish, Iranian, Indian, Pakistani and Irish immigrants. It is without doubt the happiest classroom you will ever see! … And be careful Stephen Patrick Morrissey- There’s a large group of youth in your white adopted city that hark back to the days of empire, when the Romans would hang, draw and viciously bum ‘stranieri’ like you!…”

During the 2011 English riots, he gained new fans while alienating others with this no-holds-barred status update on Facebook:

“The banks, the government, the whole media and the police are absolutely indistinguishable from the set of criminals running the streets tonight. Why are people moaning about a few buildings? The rioters would have to burn down another million buildings before they did the damage those ruthless c**** in uniform and suits have done!”