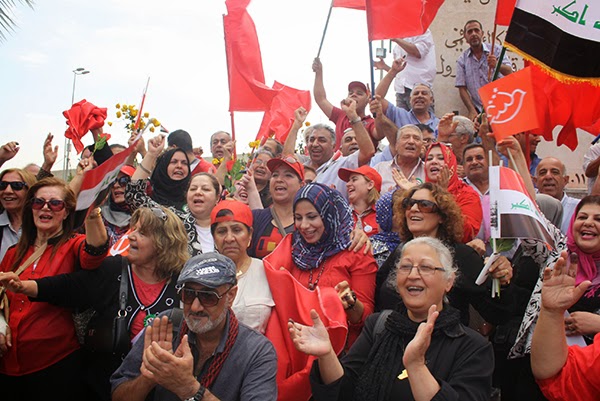 Salam Ali is a member of the Central Committee of the Iraqi Communist Party, here he tells LookLeft about the current political situation in his country.

Is Iraqi society going forward or backward at the moment?
The situation in Iraq has become more complex and witnessed further deterioration in recent months on all levels, especially with regard to security. This is taking place in a climate of a deep political and structural crisis that has continued since the parliamentary elections in 2010. As a result the people’s suffering has worsened, with grave concern for the future of the country and fear that it could slide into an even worse situation.

The essence of the crisis is due to the sectarian-ethnic power-sharing system that has been in place since 2003 and is consolidated by the ruling political parties and big blocs. These forces are intensifying their fight over political power, privileges and influence, and have a vested interest in maintaining the current crisis, and creating new ones, playing for time till the forthcoming parliamentary elections in April 2014. They resort to manoeuvres and striking deals instead of pursuing a proper democratic and constitutional course to extricate the country from the current political crisis and suffocating impasse.

The most dangerous development in the recent period has been the terrible worsening of the security situation. Terrorist operations have intensified, covering more parts of the country, with more than 7000 people killed so far this year by waves of car and suicide bombings. The victims of these barbaric atrocities are mainly innocent civilians, including workers and the unemployed in poor districts. What makes the security situation worse is its deepening sectarian nature, with the forcible eviction of people in some areas along sectarian lines, and attempts to create new demographic realities on the ground. This is inflicting great harm to national unity and the social fabric of the people.

The regime’s crisis has also been manifested in the poor management and running of state institutions, both executive and legislative, as well as economic paralysis.

The deterioration is not confined to the security situation. The regime’s crisis has also been manifested in the poor management and running of state institutions, both executive and legislative, as well as economic paralysis. This is aggravated by rampant corruption. The living conditions of vast sections of the population have worsened, with high unemployment, poor services and crises in housing, health and power supply. According to a recent UN report, 6 million Iraqis are living under the poverty line. This is the reality of the situation despite the continuing rise in oil revenues which it is estimated will reach $140 billion in 2014.

It is important to mention the growth of comprador and parasitic strata accumulating enormous wealth from public money grabbed through corruption, big contracts with the state, in collusion with influential officials, as well as speculation, smuggling of funds and other parasitic activities. There is a tangling of interests between influential political forces in power and the growing parasitic and comprador strata.

How is the situation in Syria, and more generally the Gulf States-backing of terrorism, impacting on Iraq?

The worsening crisis in Syria, and intensified external interference by regional and international forces, has grave consequences for the whole region, including the danger of sliding to sectarian into conflicts and wars. The developments in Syria have impacted Iraq, spilling over the borders, and have given new impetus to terrorist and extremist Islamists and various shadowy armed groups. These forces are thriving on a wave of sectarian agitation and bigotry that has received generous logistic and material support from reactionary regimes in the area. A proxy war between these regional forces is taking place under sectarian cover, combined with imperialist interference to inflict harm on the states of the Middle East and serve the interests of Israel.

The negative stance of the Iraqi government in dealing with legitimate demands of protest movements in western and northern areas, bordering Syria, has contributed to this situation. Increasing numbers of young people who participated in these protests, and who already suffer high levels of unemployment, were frustrated by the lack of response to their demands. This factor, among others, has been used by terrorist and extremist organisations to their advantage, thus finding new safe havens and sources for recruits.

What is the current strength and main goals of the Iraqi Communist Party?
The main strength of the party lies in its patriotic nature, its deep roots among the Iraqi people and toilers, its relentless struggle in defence of their fundamental interests and rights, and a history of enormous sacrifices in fighting over several decades against fascist dictatorship and repressive regimes. It is also not tarnished by corruption and is known among the people as “the party with white hands”. Unlike religious and nationalist parties, its membership includes Iraqis irrespective of their ethnic or religious affiliation, and from all parts of Iraq. The “Kurdistan Communist Party – Iraq” is part of the organisational structure of the Iraqi CP, enjoying independence in matters concerning the federal region of Iraqi Kurdistan.

The Iraqi CP represents the main force of the Left in Iraq. It has exerted relentless efforts to achieve unity in action of the democratic forces. It has played a leading role in setting up a broad coalition called the “Democratic Current”, which was launched in 2011. The party is striving to transform it into an effective principled force in the ongoing intensified struggle over the future of Iraq. This vision requires greater efforts to involve the trade union movement and democratic organisations, especially those of women, youth, students and other civil society organisations, in mass struggles to defend human and democratic rights of workers and people.

The party, along with the Democratic Current, was actively involved earlier this year in setting up broad democratic civil electoral coalitions in Baghdad and other provinces where provincial elections were contested in April 2013. These coalitions achieved a modest but politically significant success that provides a good basis for developing a broad democratic civil coalition to contest the forthcoming parliamentary elections in April 2014.

What are your hopes and fears for Iraq in the coming years?
As a result of internal developments, and also in the Middle East and internationally, the situation in Iraq is fraught with dangers. The Iraqi people are therefore facing an urgent task of defeating sectarianism and terrorism, enhancing national unity and thwarting anti-people schemes to push the country back into sectarian strife and civil war. The on-going battle, as well as the fight in the coming years, is over the nature and character of the emerging Iraqi state.

We firmly believe that overcoming the crisis of the existing sectarian-ethnic power-sharing system in Iraq can only be achieved by changing the political balance of forces in society, in favour of the supporters of a national democratic plan that calls for the establishing of a democratic civil state based on the principle of citizenship, freedom and social justice. This requires building a broad political and societal alliance, cutting across the sectarian and ethnic divides, with a programme opening up the doors towards a true national reconciliation, securing national unity and averting the dangers of division and sectarian strife.

In this difficult and extremely complex situation, and in the challenging struggle ahead, the Democratic Current and all civil forces must double their efforts to strengthen their ranks and build a broad democratic civil alliance to bring about change and a better future for the Iraqi people.