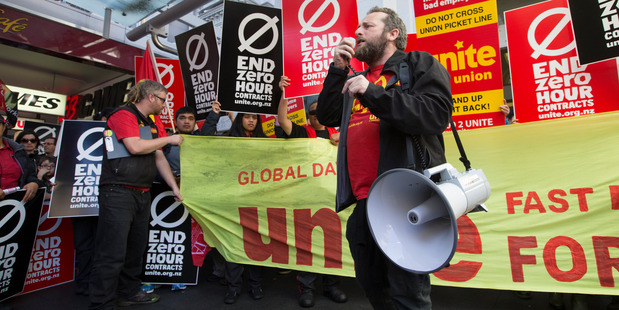 One of the major international trade union organising victories of recent times has been the ‘Super Size My Pay’ campaign waged by the Unite Union in New Zealand. Unite organiser, Dundalk man Joe Carolan, was back home recently to talk about his experiences with the campaign and the prospects of replicating in Ireland.

Since 2005, Unite (which is a separate organisation to the Britain and Ireland based union of the same name) has focused on organising fast food workers, and attempting to win them better pay and working conditions. Carolan says its success was “a big shock for the trade union bureaucracy”, they were “doing the work of Connolly and Larkin” by bringing the “spirit of the anti-capitalist movement into organised labour.” In that time they have managed to unionise about 30% of the fast food workforce in New Zealand, and have won two important reforms; the abolition of youth wage rates and pay rises. The campaign is still fighting against zero hour contracts.

One of the most valuable weapons the fast food workers have is what Carolan calls “the strategic strike”, when workers stop work for only one or two hours, ICTU Youth Conference a Success A new generation of trade union organisers attended a very successful two day ICTU Youth Conference in Dublin. The two day event was held in the Communications Workers Union hall on the northside of Dublin on the weekend 14 but at the busiest periods in a day. “This creates absolute chaos inside”, and was a plan of action devised by workers themselves, not union organisers.  There are also other methods of “guerrilla struggle” employed, such as workers in cars circling past the drive-thru window.

At present there is a struggle with McDonalds, “a hard fight in which we’ve been in the trenches for months, and it will continue for some time yet. There are two reasons why it’s particularly difficult; franchises means local capitalists are hostile to unions and the second is that the campaign has gone international, with strikes all over the US, so there’s the threat of a good example should the campaign be victorious,” said Carolan.

As far as he concerned organising the unorganised is a challenge that the trade union movement in Ireland must also meet if it is to remain relevant today.

In New Zealand however, the work is aided by a political reforms that allow organisers to walk into any workplace and sign people up to the union. Despite this, Carolan says it’s important to remember that there’s nothing particularly unique about New Zealand, it “was a laboratory for neoliberalism” and “what we’ve done there can be easily replicated by activists in countries like Ireland”.