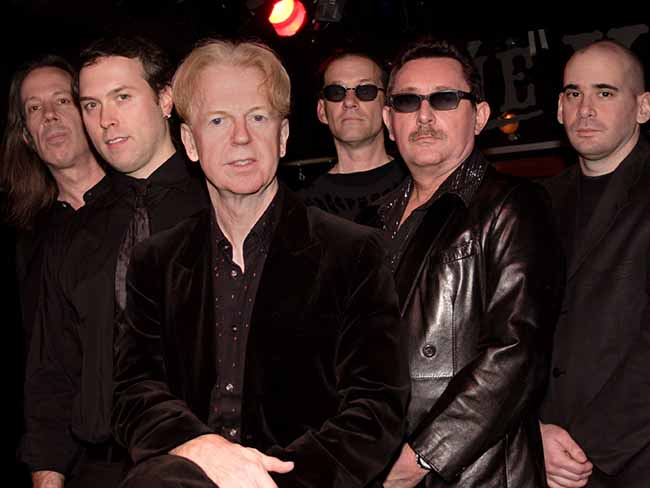 After almost a quarter century the New York Irish band Black 47 are breaking up, planning their last show for November 2014. Between now and then they will play in as many venues as possible, giving fans one last chance to see them in action.

Founding member, vocalist and main song writer is the Wexford born Larry Kirwan. During a recent short visit to Ireland in October he appeared twice at the Wexford Arts centre , performing his one man show ‘Foster in the Five Points, taking part in a discussion on emigration and also a rock and read set in Dublin’s Workman’s club.

Black 47 came together in the New York Irish emigrant scene in the late 1980’s. Their music has been described as ‘streetwise mix of rock, reggae, ska and Irish music’, that at live shows you could dance and drink to. The subject matter of their songs is as equally diverse, both correct politically, and politically incorrect. Songs about Irish revolutionaries and political history featured alongside tales of hell-raising, excessive drinking and sexual misadventures.

Kirwan also made a point about ‘singing about our audience’ and they captured both the highs, lows and the atmosphere of the emigrant life. Their very name, a reference to the worst year of the Famine, set the political nature of the band centre stage. Over the years they attracted a dedicated and fervent fan base, and were once identified as ‘the house band of NY City’. Outside of the States, their politics convinced the labels not to properly promote them, and their CDs were not easy to purchase. This is, in some way balanced by the bands relaxed attitude to ‘home recordings’ of their appearances. Photographs, audio and video recordings are encouraged at all shows, because, Larry says, “The band never plays the same set twice” adding that he’s “happy that there is a record of each unique performance.”

Kirwan has a strong base for his political outlook. Born in Wexford, he lived for some time with his grandfather, a staunch republican. Figures like Jim Larkin and James Connolly were a real part of family and community memories. Wexford was an ITGWU stronghold and experienced its own Lockout before Dublin. Decades later, locals still proudly remembered the house Connolly had stayed in when he travelled there to negotiate a settlement.

According to Kirwan; “Music is the perfect vehicle for protest and for political thought. It’s not easy, though, to write political songs. I know that for myself, I have a real background in it and I’ve done it for many years. The only way to do it is to use a story to tell it, almost like a parable.” He adds; “It is hard to write a good political song because you tend to preach with it and preaching turns people off.” Historical figures including Father Murphy of Boolavogue, Michael Collins and Countess Markievievicz have all been the subject of Black 47 songs told ‘in character’ or through the voices of those around them.

The most popular and powerful of these is undoubtedly ‘James Connolly’, which features a spoken word section, as Connolly addresses his wife: “Oh Lily, I don’t want to die, we’ve got so much to live for  And I know we’re all goin’ out to get slaughtered, but I just can’t take any more  Just the sight of one more child screamin’ from hunger in a Dublin slum  Or his mother slavin’ 14 hours a day for the scum “” It is hard to write a good political song  Who exploit her and take her youth and throw it on a factory floor.”

Kirwan recalls a breakthrough moment when this was the first played to their normally raucous crowd. During this section, “The audience stopped dead – even drinks were left untouched. It was a strange moment. When we finally finished, there was a hush. Oftentimes, I still hear that hush during Connolly and I remember that first wonderful night.” Their video for the 1990 song ‘Funky Ceili’ received extensive MTV airplay, they were popular and could have probably got away with singing about long dead revolutionaries and not offended too many people. That’s not what they were about, and their songs addressed current topics of interest relating to the North of Ireland.

Despite professing no affiliation to any political party, sections of the British media predictably branded them as ‘the musical wing of the IRA.’ This did create security concerns for the band, and when shots were fired at a St.Patricks Day show in 1996 the initial fear was that they were under attack. (The incident, in which an off duty NYPD officer died, with Larry’s wife and another women injured by ricochets, was in fact a tragic event, with no political background).

Larry’s political concerns are not just related to Ireland and the Irish: “Reading Che (Guevara) again, I realised that was one of the reasons I got into politics and became left wing,” he recalls. “Look after those below you’; it’s communism in a way, using communism in the broader sense of commonality.” Paul Robeson, the American singer and civil rights activist who was blacklisted as a communist, is also the subject of the powerful and engaging song ‘Born to be free’, which again allows the subject to tell their own story. The success of this approach is credited by Kirwan to skills developed during his pursuit of other artistic endeavours, as an author and playwright.

His best known play is ‘Liverpool fantasy’, later adapted as a novel. This envisions a world where the Beatles split before they achieved success, and Enoch Powell has come to power in Britain. If you ever wanted to know who’d win in a fight between Ringo Starr and the National Front then you’ll find the answer here. When asked what he felt would be the lasting legacy of the band, he said simply “Iraq”. The band that had never ran away from controversy were vocal in their opposition to the decision by the government of George Bush to invade the Middle Eastern country. “It didn’t take a brain surgeon to tell this was gonna be a disaster,” Kirwan says.

The band’s audience was often divided by the stance taken, and at a show on the night the invasion began fist fights broke out. “I can still see the fingers in the air as people walked out; still remember the threats, phone calls, emails, letters, and all the other instances of anger and disgust. We lost many gigs and supporters in the first years of the war but that’s as it should be. At least we made a public stand and provided cover for others who shared our views.”

Ironically, while the band were being criticised and no longer welcome at previously regular festival appearances, many dedicated fans were in the military. “This is a class war,” was how Larry described the Iraq conflict. “This is a war that a working class is fighting.”  This echoes the sentiments expressed during the American Civil War draft riots (featured in his most recent play) – “A rich man’s war, but a poor man’s fight”. As Larry sees it, “Typically our demographic of fans is such that they go into the service to get money to go to college or join the National Guard to get enough money for a mortgage.”  The bands 2009 album ‘Iraq’ is based on letters, e-mails etc from fans involved in the conflict. When asked by a California newspaper why they devoted an entire CD to the subject, Kirwan was straight-forward: “We formed as a political band.The big issue today is Iraq. To me, the question is not why Black 47 wrote songs about the war in Iraq. The question is: Why aren’t more people doing the same thing?”