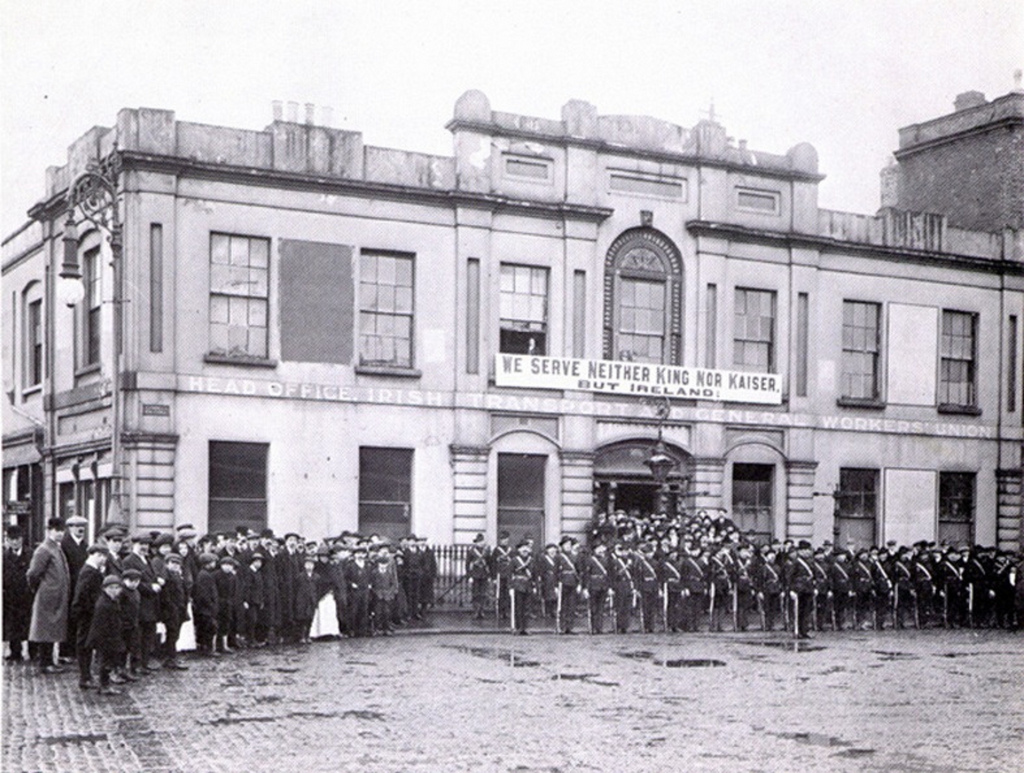 In November 1913 the worlds of class struggle and nationalism collided in dramatic fashion at the launch of the Irish Volunteers, writes Brian Hanley

By November 1913 over 20,000 workers in Dublin had been locked out for almost three months. Thousands were dependent on food aid arriving from British trade unionists, while pickets and protests were still menaced by police. Strike-breaking firms had begun to issue their scabs with firearms, leading to at least seven shootings, one fatal, by the new year.

On 13th November James Connolly addressed workers at Beresford Place and stated “I am going to talk sedition, the next time we are out for a march I want to be accompanied by four battalions of trained men. I want them to come with their corporals, sergeants, and people to form fours. Why should we not drill and train our men in Dublin as they are doing in Ulster?” This was a public announcement of plans that were in motion to set up some form of workers defense organisation.

Shortly afterwards, Captain Jack White from Ballymena, a decorated Boer War veteran and Protestant Home Ruler, took on the task of turning strikers into a Citizen Army. But the Irish Citizen Army (ICA) were not the first such organisation on the island. While Dublin saw intense class struggle the issue of self-government dominated elsewhere. In January 1913 the Ulster Volunteer Force (UVF) had been founded and soon numbered over 100,000 men, dedicated to opposing Home Rule by force.

In early November Eoin MacNeill, a UCD historian and member of the Gaelic League wrote an article entitled ‘The North Began’ in which he suggested nationalists form a similar organisation to the UVF. MacNeill was approached by members of the Irish Republican Brotherhood who saw the opportunity to set up a broad-based front  that might be useful as cover for more militant strategies.

On 25 November the Irish Volunteers were launched at a rally at the Rotunda, attended by 4-6,000 people. Central figures from both nationalist and republican organisations were present, including Bulmer Hobson, Patrick Pearse, Seán MacDermott and Roger Casement. Members of the GAA, the Gaelic League, the Hibernians and a large group of UCD students filled the hall.

But when Laurence Kettle, joint secretary (with MacNeill) of the new force rose to read out it’s manifesto about 250 ITGWU members began heckling him. They chanted ‘God save Larkin’ to which some responded with ‘God save Ireland.’ Kettle’s speech was drowned out as GAA stewards armed with hurleys clashed with the union men. Kettle pleaded for quiet claiming that ‘the work we are engaged in is national work. This is not the place for the introduction of small quarrels.’ However, the hecklers responded by exploding several detonators which some mistook for pistol shots.

For a while there was chaos in the hall. Hundreds of ITGWU members also paraded outside, some with hurleys on their shoulders. Captain White approached the platform and appealed for calm from the platform and eventually some order was restored. ITGWU members rallied later at the Customs House. They had disrupted the launch because while Kettle was a member of a family with a history of land agitation and a senior personality in the Home Rule movement, he was also in dispute with farm labourers in County Dublin and accused by the ITGWU of being a strike-breaker.

In the midst of the Lockout this was not going to be ignored and the broader separatist movement were made very aware of the determination of the ITGWU to carve out its own identity. Ironically however there were also trade unionists on the Volunteer platform, men from the skilled trades, including Labour members of Dublin Corporation. The incident exposed not only the divide between militant labour and nationalism, but also divides within the Dublin working class itself.

On This Day: Government fires on strikers

On This Day: The Dublin Laundry Strike began

Who Killed Tupac? In Conversation With John Potash