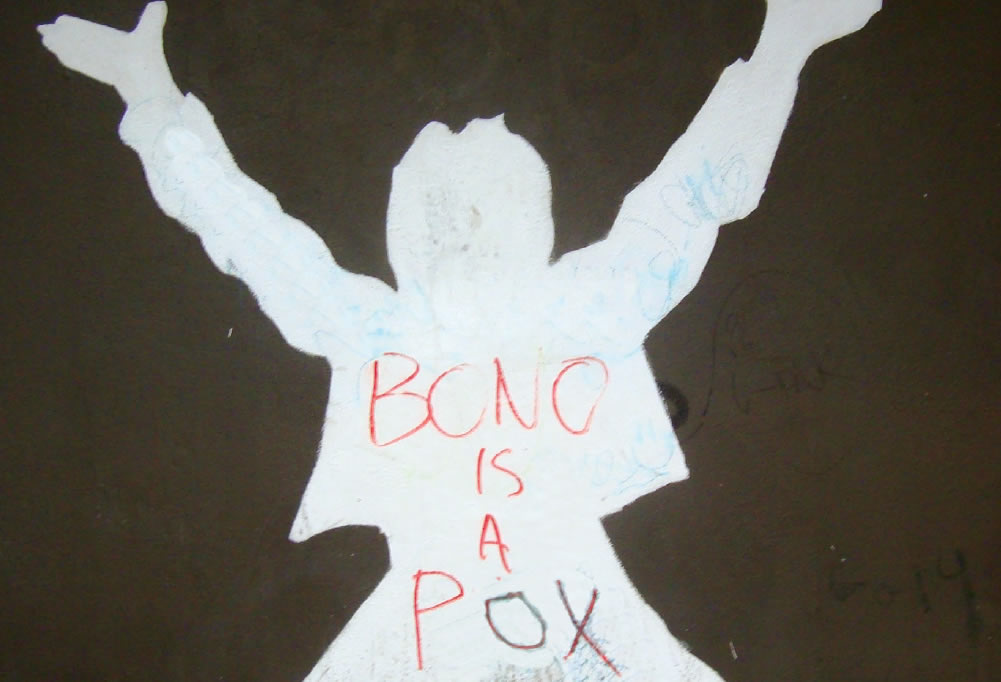 Kevin Squires discusses The Frontman: Bono (In the Name of Power) and talks to the book’s author Harry Browne.

On a wet June evening, scores of people crammed into Hodges Figgis bookshop in Dublin for the launch of The Frontman: Bono (In the Name of Power), penned by veteran Irish-American journalist and academic Harry Browne.

Published by Verso as part of their Counterblasts series of short polemics, it’s something Browne was approached to write, rather than a book representing an itch he had been desperate to scratch. Thankfully for readers, he accepted the invitation because, as he told LookLeft, “Bono is a great target because of the realms and registers and spaces he straddles”.

Yet, to read the reviews and reactions in the mainstream Irish print media, one would suspect that this is merely a petty, vindictive, unneeded and badly-written takedown. These views essentially ranging from the ‘it’s grand to slag Bono, sure he’s a pompous eejit, but don’t hate on his charity work’, to ‘Bono is a super great guy, how dare anyone diss him’. Notably, the Irish Times called it “turgid and mean-spirited”, while Bill “we are all in Bono’s debt” Clinton, Adi “don’t buy this book (which I haven’t read)” Roche, and Brendan “what the fuck has Browne ever done?” O’Connor also targeted their outrage towards the book.

The Frontman is in fact a devastating critique of Bono and ‘Bonoism’, and, by extension (and more importantly), of the entire system of “celebrity humanitarianism” and ‘philanthrocapitalism’ of which he is probably the world’s most famous exponent. It’s eminently fair, brilliantly written and utterly justified. It’s also long overdue.

The Frontman deals with three wideranging aspects of Bono’s legacy; Ireland, Africa, and the rest (which is a lot). From U2’s domestic tax ‘pragmatism’, to the pointless spectacle of Make Poverty History, to the frankly insane claim made by ‘people’ (i.e. Bono) that the 1998 U2-organised photo-op featuring John Hume and David Trimble “pushed the people into ratifying” the Good Friday Agreement, to the vapid ego-trip that is the ONE Campaign, it’s all here.

That’s not to forget the time “Bono stood beside Bush and Blair as they went to war in Iraq, and he told the world repeatedly that these were really good men with profound humanitarian motives”, nor that from “2012 to the present, [he’s been fronting] for the New Alliance for Food Security and Nutrition, and its blatant agenda for foisting corporate agriculture on Africa”.

But while the book is very much about Bono, it’s also very much not about him. It’s about what he represents, and the dangerous nature of philanthrocapitalism.

For the uninitiated, philanthrocapitalism is a relatively new type of social ‘activism’ that asserts that many of the world’s ills can be remedied using a) the methods of the neo-liberal market and b) the beneficence of elite contacts of the business world. While beloved by many loaded liberals, from Bill Gates to Bob Geldof, severe scepticism has been expressed by social movement scholars and activists.

Author Michael Edwards, for example, has argued that such methods don’t “[leverage] fundamental changes in society” because “systemic change involves social movements, politics and the state”. Philanthrocapitalism is not interested in challenging such societal fundamentals as the for-profit economy; as the name suggests, it requires the existence of the capitalist system to survive.

For Bono and U2, belief in such market-driven solutions may be traced back to the Self Aid concert and campaign which they fronted in 1986. Ireland was in the midst of recession, with unemployment at 17%, tens of thousands emigrating every year, and almost 16% of people living in poverty. In the face of this, instead of arguing for political and economic change, Self Aid promoted a philosophy of charity investment in startups, ‘positive thinking’ and ‘pull yourself up by the bootstraps’ type of capitalism, not a million miles from the ‘get on your bike and look for work’ philosophy being peddled by the Tories across the water.

Browne writes that this “charade, critics argued, was letting the state and economic elites off the hook by suggesting that economic crisis could be solved by some form of ‘self’ activity by the unemployed and employers”. Basically, it gave employers the chance of a bit of free advertising in return for the creation of “thousands of dubious ‘jobs’… by the concert/telethon”.

There is a fairly direct line between this event and not only celebrity ‘activism’ on behalf of others but what Browne told LookLeft is “the Bono ‘activism’ that I find the most offensive, the Product (RED) campaign”.

(RED) is basically a feel-good advertising campaign, “selling stuff coated with a thin layer of conscience”.

(RED) is basically a feel-good advertising campaign, “selling stuff coated with a thin layer of conscience”. The brand is licensed to global megacorporations like Apple, Gap and Motorola, who agree to give a percentage of sales of (RED) branded products – no one knows precisely how much as all contracts are secret, “a model of opacity” as Browne writes – to the Global Fund for HIV drugs in Africa. Ironically, it seems these companies pour far more into advertising their (RED) branded goods than ever seeps down into Africa.

According to the book, one unrefuted estimate speculates that in its first year, there was “a €100 million marketing spend” on (RED) products, “compared to $18 million raised for the Global Fund”. One can only imagine what the profits were, even after (RED) took their cut.

“Of all the projects he has been involved in, nothing more clearly and cynically sends out the vital ideological message that is now central to his politics: Don’t worry folks, the corporations and celebrities are sorting things out – all you’ve got to do is buy something with our brightly coloured branding”, Browne told LookLeft.

Indeed, there is a lot to be said for the “(RED)washing” of transnational capitalism under this scheme. Of the three companies mentioned above, Apple is notorious for disgraceful treatment of its workforce in China; in 2007 Gap was caught operating child sweatshops and has refused to sign a worker and building safety agreement following the notorious Rana Plaza factory collapse in Bangladesh earlier this year; Motorola is up to its neck in the illegal Israeli occupation of Palestine. Pick any other three and undoubtedly a similar list could be produced.

Although Bono has rarely voiced a public opinion about Palestine-Israel, when he has it has been to admonish the Palestinian victims of colonialism

Although Bono has rarely voiced a public opinion about the situation there, when he has it has been to admonish the Palestinian victims of colonialism and Apartheid for not producing “their Gandhi, their King, their Aung San Suu Kyi” and for being people “filled with rage and despair”. Contrariwise, he pronounces himself an “admirer” of Israeli President Shimon Peres. The topsy-turvy world inhabited by those whose deference to power seemingly knows no limits is both astounding and tragic.

Of course, these are merely examples of the insights we’re granted into this crazy world, thanks to this short, but vital, volume chock full of illustrative and informative such vignettes.

If there is a disappointing aspect of this book it’s that, alas, Browne says relatively little about U2’s musical output (a consequence of intended coauthor Jeffrey St. Clair having to leave the project early on), but when he does it’s illuminating. The deconstruction, for example, of ‘Sunday, Bloody Sunday’, is masterful. The dissection of U2’s ‘discovery’ of black music – blues, gospel, jazz, soul – is no less instructive.

It is possible that Bono is vain, narcissistic and deluded enough to believe, despite evidence to the contrary, that he is genuinely ‘doing good’, and doing it better than anyone before him. But the book doesn’t set out to say ‘Bono is a bad person’, it says instead ‘Bono is an (increasingly less) pretty face of a rotten regime, a global system of vacuous celebrity politics masking the reality of an unreformable rapacious capitalism and brutal imperialism running rampant over the world’. Or, in Browne’s own, more pithy words, Bono is, either by design or ignorance, merely an “ambassador for imperial exploitation”.