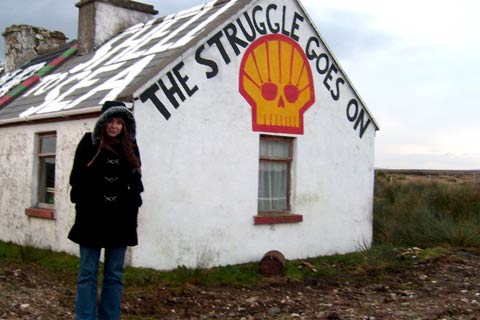 Work on the controversial Shell gas pipeline in the Erris area of North West Mayo was disrupted during a week of protests in late June.

Local people, who say the pipeline is dangerous, and campaigners from Ireland and abroad gathered to take part in a week of direct actions and protests aimed at disrupting attempts by Shell to put the finishing touches to the controversial pipeline.

Over the course of the week bog mats for laying the pipeline, a sandbag dam and other equipment was damaged. During the protests five campaigners were arrested. Mayo Shell to Sea activist, Maura Harrington, told LookLeft “that Shell are continuing to try to plunder the natural resources of the area, despite being ten years behind schedule and three times over budget, it shows the value of the ultimate prize.”

The Shell to Sea campaign has produced a booklet, Liquid Assets, which outlines the estimated value of the oil and Gas resources off the Irish coast and the State’s failure to maintain control over them.

Liquid Assets is available at www.shelltosea.com/booklet