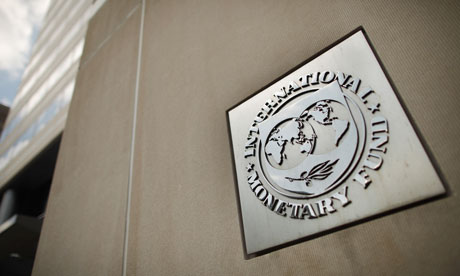 It is perhaps the ultimate testimony to the Fianna Fáil/Green government’s record that when the IMF’s representatives arrived in Dublin in October last year they were welcomed by many, as Ultán Gillen explains it may well be a response that will be regretted.

It is hard to disagree with these aims. No progressive person can argue with the desire to foster employment and sustainable growth and to reduce the global poverty that keeps over three billion people eking out an existence on less than $2.50 per day. However, the actual purpose of the IMF is a lot different: the real job of the IMF is to protect and promote the interests of international capital.

The IMF’s primary method for doing that is to offer to “help” indebted countries by loaning them money at high rates of interest in return for the “liberalisation” of their internal markets and their trade relations with other countries. In practice, this means ruthless cuts to public services and social security, the selling-off at low prices of valuable public assets, and taxation policies and terms of trade that suit the multinational corporations and governments of the strong imperialist countries. It is not for nothing that the IMF has been described as “a kind of global loan shark”.

The costs of IMF “aid” are not just financial. The most obvious effect of an IMF “bailout” is the debt that generations of a country’s real producers of wealth –the working class- will have to pay off. But there are other consequences. In the aftermath of the fall of the socialist states in eastern Europe, there was a rush to claim these newly-available markets for the neo-liberal form of capitalism. The IMF provided the shock troops, teaching the methods and ideology of capitalism to the new elites seizing control of public assets for themselves.

A separate study undertaken by academics from the universities of Oxford, Cambridge and London and published in the medical journal, the Lancet, showed that the rapid and widespread introduction of privatisation in the former socialist countries in the early 1990s raised the death rate by 13%. The Republic’s health service has already been starved of funds by the unlamented Mary Harney and her predecessors. With Colm McCarthy’s commission on state assets already seeking to privatise as many public assets as possible even before the IMF arrived, the life expectancy as well as lifestyle of Irish workers is potentially under serious threat.

The IMF began life as part of the Bretton Woods agreements of 1944. These were intended to create a series of new institutions that would reguate international economic activity according to Keynesian principles of state backed investment. However, in the 1970s the IMF was captured by those who advocated the neo-liberal principles of Milton Friedman and his Chicago School of Economics. Friedman would reach the pinnacle of his influence as an advisor to former US president Ronald Regan; but he and his disciples were first provided with an opportunity to shape a country’s destiny by the Chilean dictator General Pinochet after his CIA-backed coup against the democratically- elected socialist government in 1973. Friedman met Pinochet in Chile in 1975 to discuss his theories.

Despite the neo-liberal propaganda about Pinochet creating an economic miracle, the reality is that neo-liberalism massively damaged the Chilean economy, multiplying unemployment fivefold in ten years, and massively increasing poverty. Chile’s recovery was in fact stimulated by increased government involvement in the economy from 1983. The blend of right-wing military dictatorship and neo-liberal economic policies was repeated by the IMF in many countries in Latin America and beyond. As in Chile, the typical result was increased inequality and the further subordination of the economy to global capitalism.

The IMF’s attempts to disguise the reality of its interventions behind progressive rhetoric cannot hide the truth. It exists to enforce inequality within and between countries, and to ensure that as many parts of the world as possible are fully subordinated to neo-liberalism. It is not a neutral broker, but rather one means by which capitalism enforces its rule on the world. It perverts not only the priorities of domestic governments, but also trade between peoples to the detriment of all. Its negative impact goes far beyond predatory lending, affecting the basics of life itself.

Even Bill Clinton acknowledged this in October 2008: “We need the World Bank, the IMF, all the big foundations, and all the governments to admit that, for 30 years, we all blew it, including me when I was President. We were wrong to believe that food was like some other product in international trade, and we all have to go back to a more responsible and sustainable form of agriculture.”

The history of the IMF is clear. It rides roughshod over the democratic wishes of entire peoples, and its policies serve only to damage the weakest in society. It is a tool of the rich and powerful, and the enemy of the working class, in Ireland and across the globe.

Article published in LookLeft Vol.2 No.5