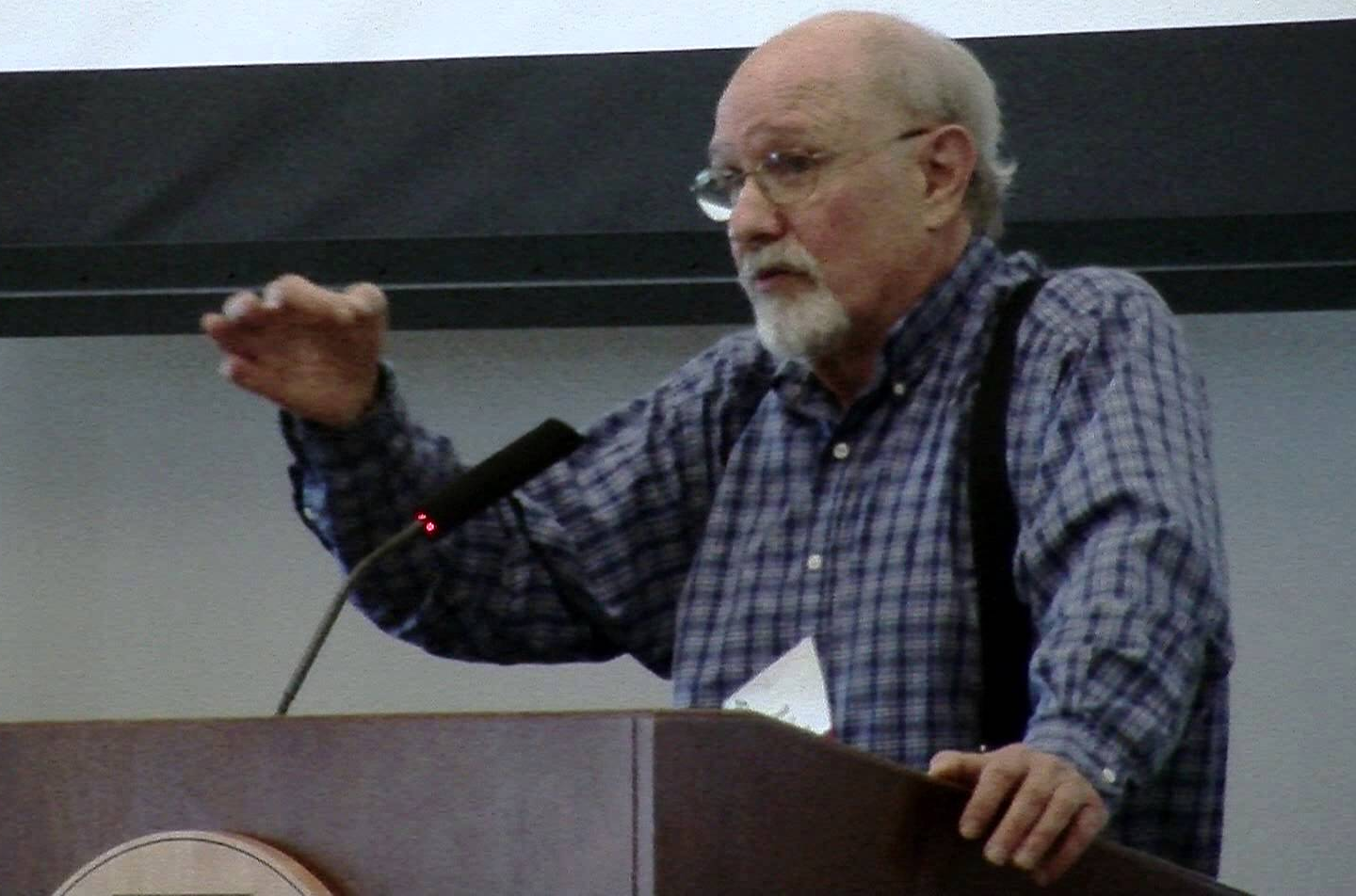 Steeped in the tradition of the American radical Left, Fred Magdoff has committed his life to understanding society and how it can be progressively changed. Francis Donohoe reports.

Meeting him in a Dublin hotel, the bearded and spectacle wearing Fred Magdoff sitting at his laptop looks every inch the well-travelled intellectual that he is. Although brought up in an East Coast Jewish socialist family, 70 year old Magdoff speaks with the laid back drawl of the American North West, where he has taught for many years at the University of Vermont.

With his father, Harry, the founding the influential Monthly Review magazine in 1949, a publication Magdoff maintains in his role as director of the Monthly Review Foundation, he is in a unique position to outline where the globally the progressive struggle stands.

Firstly he outlines his analysis of the current capitalist crisis, seeing “a lot of similarities” between how the crisis has manifested itself in Ireland and the US.

“Key was the huge increase in the financial sector of the economy, in the US this process started in the late 1970s with the financial corporations gaining more and more power politically because they controlled the money,” Magdoff begins.

“These financial interests were able to mould the regulations, eliminating some, so they had a freer reign. This allowed them to do what they wanted to do with regard to loaning money and speculation, in a process some have called the financialisation of monopoly capital.”

This process began due to monopoly capitalism finding it increasingly difficult to make the profits it craved in “the real economy” – the productive economy of manufacturing, service industries etc.

“The focus transferred to a financial system, of which a very high percentage does nothing socially useful whatsoever – it is just about trying to make money, which is done by merely gambling. There are many different ways to gamble, currently there is four trillion dollars a day being gambled in currency speculation globally.”

Such a system, Magdoff sees as “inherently unstable if it grows to large.”

Cutting though the jargon of contracts for difference, sub-prime mortgages and the more exotic financial instruments used to mystify the money markets he explains its operation simply.

“They took on debts so they could have bigger bets, it’s called leveraging. You take one dollar of your money and borrow $30, and ratio of 30 to 1 was not unusual, and then you bet the whole thing. If your bet comes in and you make money, it is at a fabulous rate of interest based on your own investment which was that one dollar. Of course if you lose, you lose fabulously as well.”

Magdoff explains the political context which allowed the financial system to rise to such a position of prominence.

“This didn’t happen overnight. There was a progression and part of the progression was getting the changes in legalisation that made it legal to do things that previously it was illegal to do.”

Magdoff believes the successful sidelining of the American organised Left, through the McCarthy era to the Neo-Liberal assault on the trade union movement, was key to creating the conditions for the financial corporations rise to power. But he also recalls times when the US Left, initially build around European immigrant communities, was a force to be reckoned with.

“There were German socialists, Scandinavian socialists, my family background was radical Jewish. All my grandparents came to the US in the early 1900s. I know my grandfather came because he had to flee after the 1905 revolution in Russia, he had a gun, the authorities knew, and he figured that he better get out of Russia.”

The Magdoffs became involved in the radical trade union movement – “Some of the unions became corrupted, some, such as the international longshoremen, on the West coast, maintain a very strong left background, to this day.”

The strength of the US organised Left reached its height in the 1930s, pushing FD Roosevelt’s Democrat administration towards the pro-working class and economic development policies of the New Deal era. But following World War II the Left came under a major attack, most infamously from Senator Joe McCarthy.

“Senator McCarthy and other members of Congress started looking for what they called ‘communists’ in the government, in the film industry and elsewhere. They were convinced the communists were huge and actually subverting the country. So during the McCarthy period anyone who was really Left was forced out of the government, they were fired or left. My father left before he was fired. He had a senior position in the US Commerce Department. There was no question they were going to look into his background and he was going to be fired. He so happened not to be a communist but he had enough connections with people on the Left, including people in the Communist Party who were friends, so he left before he was fired.”

McCarthy and his colleagues were largely successful – “they really suppressed the Left in many ways and it helped to make socialism, or communist, very bad names. Even to talk about socialism now in the United States is very difficult.”

Magdoff himself politically came of age during the 1960s and was active in the anti-Vietnam war movement.

“The 60s saw a resurgence of political activity in the US. What you had was the New Left, there was still plenty of the old Left around, and they actually helped. There was people like Students for a Democratic Society, they would come and talk to my father, just to talk about things, they weren’t’ asking for political direction or anything but they just wanted to understand things better. So there was a connection between the old Left and New Left, it wasn’t totally separate.”

This momentum was not maintained with the New Left fragmenting into groups focusing on sectional interests from women’s rights, the environment to global poverty. This fragmentation meant the US Left could muster little practical response to the Right-wing onslaught against its bedrock – the trade union movement – which started in earnest with the election of Ronald Regan as president.

“There were a number of avenues (the forces of the Right) were pursuing but one of them was to do everything they could to lessen the power of unions, to decertify unions, to break unions. When Ronald Regan broke the 1981 strike of the air traffic controllers by firing them all, once he did that businesses said wow, there is nothing to this we can be very, very unpleasant to our unions.”

Scathing of President Bill Clinton for accelerating the policies of his Republican predecessors, Magdoff is also dismissive of Obama –“I don’t see him being any use to the Left. Obama may once have been somewhat Left but certainly in his adult life he was not Left, he was what you might call in the US a decent liberal, at best.”

But within the system, as it is currently stands, Magdoff accepts little more could be expected- “You don’t know what Obama knows and feels he has to do, but he either doesn’t understand what is going on, and he doesn’t know a lot about economics, or he is solely doing what he is doing to get re-elected. Any American president has relevantly little ability to get outside of a certain direction without a mass movement behind them.”

In Latin American in recent years Magdoff has seen more reason for hope. “To go against American policy you have to be in very strong position…The US will do what it can to defeat Left forces aboard. Sometimes they were a little bit distracted by the wars in Iraq and Afghanistan, and I think that has enabled some South American leaders to develop programmes without that much interference from the US, but now the US is placing a lot of attention on them so it’s difficult.”

Magdoff has been particularly interested by the attempt to build a form of socialism in Venezuela. “The Venezuelans are trying something that no one has tried before, which is trying to create socialism within capitalism. Side by side you have a fully functioning capitalist system, some private banks, capitalist businesses, private ownership of land – although they are taking some from wealthy landowners who are not using the land and they are giving it to farmers.”

“Also there are small shop owners, petite bourgeois people, vendors. I think Chavez (Hugo Chavez, president of Venezuela) has been smart in not really touching these and I think there is not any need. You can’t plan where you need to put a local bicycle shop in Caracas. Does this contradict socialism? Maybe to a certain extent it does but you probably need that flexibility on local initiatives.”

“This is one of the things I found fascinating about Venezuela, they created these community councils. One of their responsibilities is to decide what the major needs that they have are, you may need more electricity, more housing, you may need to bring in water, a clinic; you decide it is your decision. Then it has to be approved (by the administration), but it is nearly always approved and they are given the money and the technical expertise, and usually there is lot of volunteer labour (to bring the local plan to completion).”

He is also optimistic for the Left internationally as the current capitalist crisis develops. He sees the rebuilding of the trade union movement as central to a progressive resurgence.

“It has been effectively marginalised by capital in many ways, they have been delegitimizing the labour movement in the eyes of people who are not in the labour movement. People who are not involved in the movement use to have a much more favourable view but now many just view them as another special interest group, rather than a major important force in society that is fighting for better conditions.”

But the Labour movement alone will not be enough, with Magdoff seeing the need for “a socialist type organisation that is not sectarian but can bring all these other movements together; the women’s movement, environmental movement, anti-war, these are all separate but they are all the same, the issue is capitalism and we need to fight it as one issue. The only way we are really going to get things is fighting together, even if they are not the issues we are organising on. To have progressive change that goes against capital you need mass mobilisation and good leadership.

“I think it will happen, it will take some time. In the 1930s, everyone was so shocked by what happened they were demobilised and it took time for rent strikes to occur, or unions to get more organised, but what is happening now is not ending anytime soon, so maybe in a year or two we will see something different.”

To learn more about the Monthly Review magazine and the several books on international capitalism, working class organisation and environmentalism written by Fred Magdoff and other contributors to the influential Marxist journal visit: www.monthlyreview.org